Since star Patrick Stewart has said the new series is a show for the age of Brexit and Trump, it might not just be another example of empty nostalgia 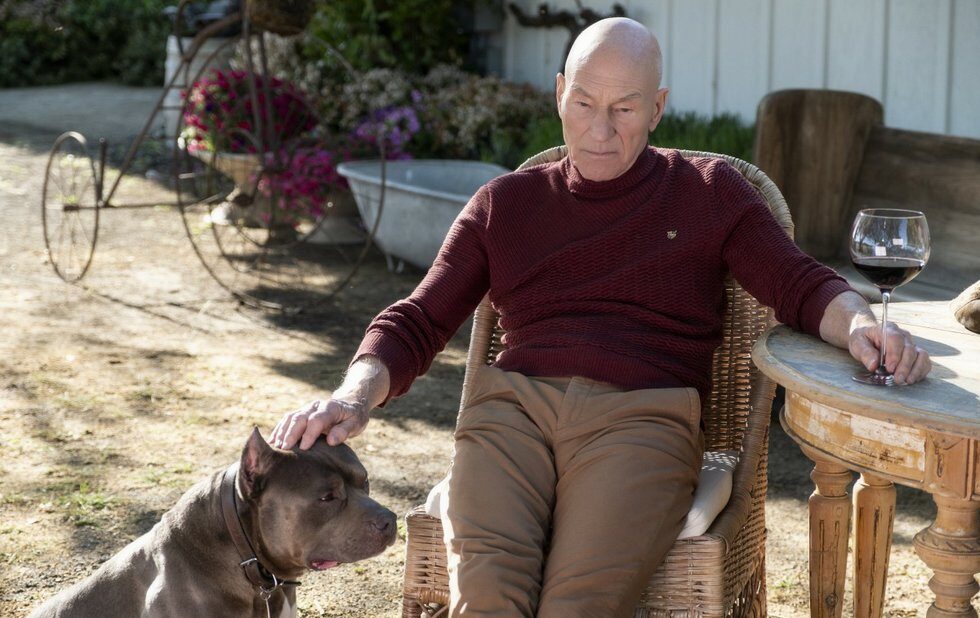 NOW's senior film writer would be happy if Star Trek: Picard were just Patrick Stewart talking to his dog.

When Patrick Stewart returns to the 24th century in Star Trek: Picard this Thursday, the Star Trek franchise will be doing something it hasn’t done in a very long time: it will look to the future.

The new series marks the first time since Star Trek: Nemesis – the dreadful 2002 feature that killed the Next Generation crew’s big-screen prospects – that a Trek property has moved forward rather than backward.

All post-Nemesis efforts have been prequels: the TV series Enterprise, already under way when the film was released, was set a century before the events of the original Star Trek, and J.J. Abrams’s subsequent Trek movies reboot the classic characters of Kirk, Spock et al. via alternate timeline. And the ongoing Star Trek: Discovery unfolds about a decade before classic Trek. Like Picard, it’s set in the series’ original timeline.

I know, I know. It can get confusing. But it’s also comforting for some of us nerds to fuss about the franchise’s tangled history. It takes us back to a time when the only Trek continuity to argue about involved whether Ensign Chekov was in the episode where Kirk met Khan (he wasn’t), or if the whole stardate thing made any sense at all (it didn’t).

It was a simpler time. Star Trek: The Next Generation was appointment viewing because PVRs were just a glimmer in an engineer’s eye, and because Stewart’s Jean-Luc Picard was an immensely charismatic captain who listened to his crew, favoured negotiation over battle and only raised his voice when he absolutely had to, unlike William Shatner’s more impulsive Kirk.

The show, set about 100 years after Gene Roddenberry’s original five-year mission, ran for seven seasons and reinvigorated the property. And over those seasons, Stewart became an unlikely sex symbol, a daddy figure decades before social media arrived to clarify what that was.

And while Stewart was clearly interested in doing other things post-Trek – like making a string of X-Men movies with his bosom buddy Ian McKellen – he left the door open for a return to the future, providing the right pitch came along.

The pitch for Picard, at least according to its marketing materials, is a new adventure that finds our hero retired and working his family’s vineyard in France – only to be drawn back into a new adventure involving a mysterious young woman (Isa Briones) which seems set to reunite him with some of his Enterprise shipmates.

I’m intrigued. I love Stewart as a performer and a human being – the joy he takes in his public life is infectious, and his advocacy for pit bulls, which clearly led to Picard’s canine companion on the new show, warms the damn heart. I’m also excited about the presence of Pulitzer Prize-winning author Michael Chabon as Picard’s co-creator and showrunner Chabon’s 2000 novel The Amazing Adventures Of Kavalier & Clay was a dense interrogation of the human need for heroes and mythology, themes which seem naturally tied to fan culture. Chabon also wrote Calypso, one of the Short Treks tied to the first season of Discovery, which threw out almost everything about that show and told a new, weird story.

But I can’t avoid acknowledging that Picard, along with the resurgence of Star Trek as a franchise, is just the latest in a never-ending trend of nostalgic entertainment, recognizable properties that are being dusted off for another shot at cultural relevance.

I’m encouraged that this show appears to be engaging with the times in which it’s made, rather than pretending that nothing has changed: Stewart has spoken of Picard as a show for the age of Brexit and Trump, with its protagonist, his better days behind him, facing down a newly isolationist Federation.

Trek hasn’t been especially good at engaging with the real world – it took six decades to acknowledge same-sex relationships – so this could bode well. Or it could be a mislead, designed to flood the internet with Photoshopped images of Borg armada in red MAGA caps.

I guess we’ll all find out once Picard beams into our homes this Thursday. But honestly, I’ll be happy if it’s just an hour of an old man talking to his dog. Surely Jean-Luc has earned that.