The writer/director talks about Wonder Woman, sex and why women tend to seek the truth 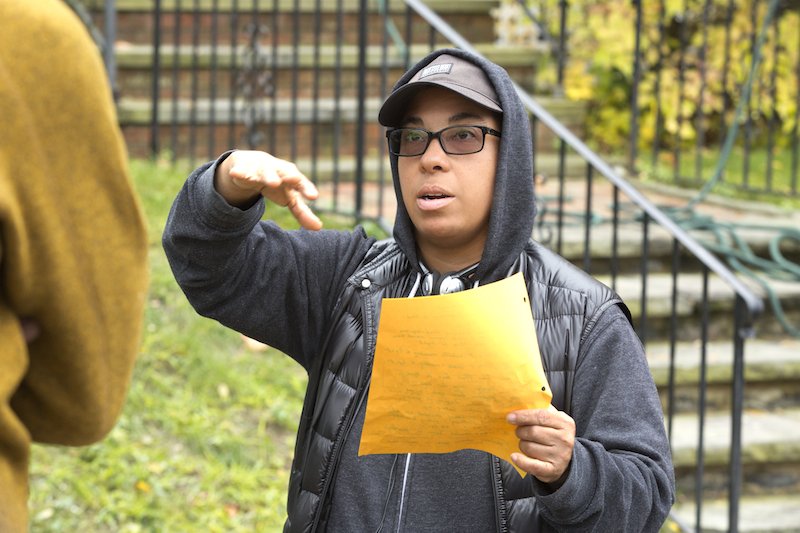 Angela Robinson is about to surprise a lot of people.

After a decade working in TV, the writer/director – who broke out in 2004 with the satirical comedy D.E.B.S., and the Lindsay Lohan comedy Herbie: Fully Loaded – has come back to feature filmmaking with Professor Marston And The Wonder Women.

It’s not your usual biopic. And the day before the film’s TIFF premiere, we sat down to talk about it.

These are people who had a very complex physical and emotional entanglement, and your movie tells their story without any affect, or winking, or anything like that. You depict their feelings in a straightforward manner, which feels almost daring.

I thought about that a lot. I did a lot of my TV work on cable, on The L Word and True Blood, and these kind of shows that actually allow you, way more than in the movies, to explore sexuality in an emotional and complicated way. I think they’re less scared of it than movies historically are. So I feel like I brought a cable-television sensibility to those scenes: I wasn’t scared of them.

It also helps that you’re dealing with characters who are smart enough to understand what’s happening to them as it’s happening – or at least try to understand it, in terms of Marston’s theories of dominance and submission playing out in romantic relationships.

What Marston was talking about with sex and sexuality, and women and gender – it was really essential. You can’t short-shrift that part. That’s how they come together. It’s a very essential part of the actual storytelling, and not gratuitous at all. And I was really interested to explore the dynamics of desire not just between Marston and Elizabeth, but also between Olive and Elizabeth, which I feel is rarely if ever explored on film in any complicated way. That’s a really interesting moment in the film, do you know what I mean? Like, the ship turns, and we’re gonna talk about it.

And the characters themselves have to talk about it, because 90 years ago there simply wasn’t anyone talking about the sort of relationship these people were exploring.

Yeah, no – there wasn’t necessarily a word or an identity all those kinds of conceptions that we put on it now weren’t formed. I very deliberately used familiar film tropes – a biopic structure, a romantic structure, even a dash of melodrama – cuz I wanted to tell a very organic love story, and I didn’t want to put any sort of judgments or preconceived notions on them. I just wanted to make the audience feel what it feels like to fall in love, and to step by step understand the microbeats about how something like this could happen – to the point where the audience is rooting for them to be together.

This is what I meant about playing it straight, yeah.

It probably helps, when you’re exploring new emotional ground, to be the only researchers on the planet with a working lie detector.

And by connecting those dots, you bring us to one of the key concepts in Marston’s Wonder Woman comics: that women are constantly seeking truth, and men need to be compelled to honesty.

I personally am just sick of irony. I am just so tired of it. I mean, we did it a decade ago with D.E.B.S. it was a satire, chock-full of irony. But just personally in my life, I feel kind of exhausted by it. I’m really looking for sincerity and emotional honesty, in that I really wanted to tell an unabashedly romantic story about these three people. And it was a long journey, writing the film. I didn’t know the ending of the movie when I wrote it – I was just writing these characters, and I knew the shape of their lives, but I didn’t know how, just as a writer, I was going to resolve it in the film. And I came to the notion of this submission to love, and this kind of core idea of having to tell the truth, and having to submit to that kind of truth. And it was the least ironic thing in the world. [laughs]

How long did you work on the script?

A long time. Like, it took four years to really absorb, in a meaningful way, Marston’s theories. You can read about them, but they’re complicated and kind of dense. He talks a lot. [laughs] I had to learn all about early psychology in order to contextualize his work, to know how out of the mainstream he was with his contemporaries, just so I could have a bead on whether he was a whack job or pretty much in line with the conventional thought at the time. But there was just a treasure trove of ideas. It was really hard to distill, but I found that ultimately very satisfying.

And the timing worked out, because now you’re getting Professor Marston And The Wonder Women in theatres just months after that official Wonder Woman movie demonstrated the appeal of the character. This is practically a prequel.

Did you notice more interest in the project last spring, when Gal Gadot’s Wonder Woman first turned up in Batman V Superman?

Everybody’s complimented me on the timing of the release of [my] movie, and that’s the most ironic thing about it. We shot it a year ago, and I didn’t even know if I’d have distribution, let alone Annapurna releasing it at this quote-unquote perfect time. But I do feel like it’s part of an overall Wonder Woman renaissance, like it’s catching this wave. Part of why I started writing the movie was my frustration that there were these infinite reboots of Batman and Superman over and over and over again … and if you go anywhere in the world and ask who’s the most famous superheroes, they say “Wonder Woman, Superman and Batman.”

It was that frustration that led me to explore their origin stories. So now I feel like it’s the perfect time to honour and look at the people whose ideas are responsible for this huge pop culture phenomenon we’re enjoying. And this was actually where those ideas came from: these people.

And when you look at Wonder Woman and what she stood for – in the American narrative, in gender politics, in basic male-female relations – you realize that it’s all stuff that’s still going on 75 years later. Nothing’s changed.

Yeah, it’s a very contemporary story. Which is so crazy.