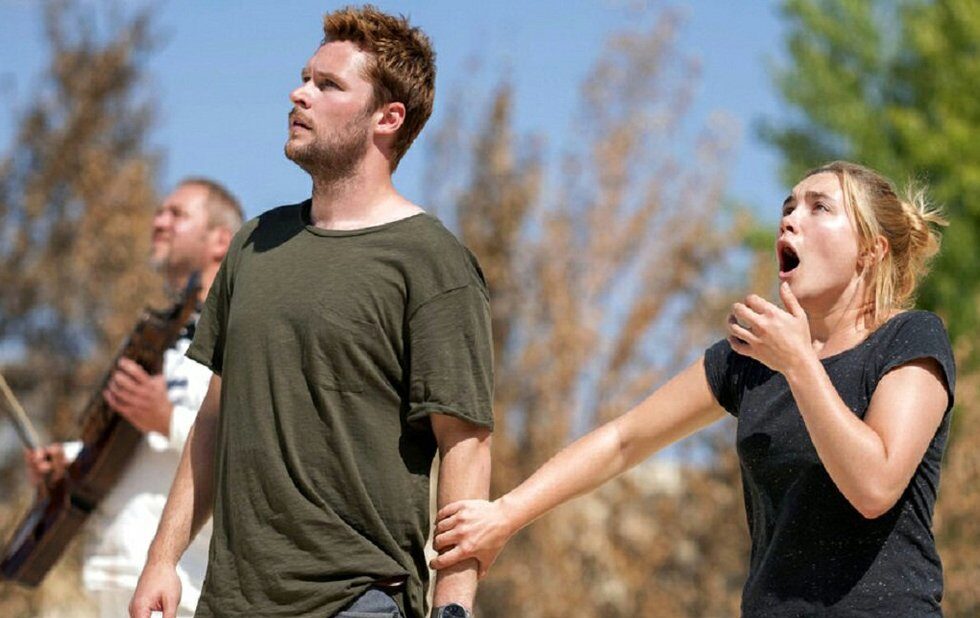 Midsommar, the new film from Hereditary writer/director Ari Aster, is a relationship drama hiding inside a folk horror movie. It tracks the disintegration of a young couple, Dani (Florence Pugh) and Christian (Jack Reynor), who find themselves stuck in the middle of a very weird solstice festival in an isolated Swedish village.

The morning after a promotional screening of their film last week, Aster and Reynor sat down to talk about Midsommar’s themes and points of reference, what its characters represent and what it says about Americans abroad and toxic masculinity, which aren’t always the same thing.

In Hereditary, you cast Toni Collette and Gabriel Byrne as American parents. In Midsommar you’ve got Florence Pugh, who’s English, and Jack Reynor, who was born in Colorado but raised in Ireland, as Yanks abroad. Is this is a conscious decision on your part? And does it bring anything to the interpretation of the characters?

Pugh was almost totally unknown when you shot Midsommar, right? The Falling and Lady Macbeth had come out, but all her other work – Outlaw King, Park Chan-wook’s miniseries of The Little Drummer Girl, Fighting With My Family – was still on its way.

Florence came on late. And I hadn’t seen any of those I had only seen Lady Macbeth, and thought she was fantastic and I’d been hearing so much about her. Jack was talking about her as well.

JACK REYNOR I’d been actively pursuing something to do with her after seeing Lady Macbeth.

ASTER Jack also made that clear to me, that he loved Florence. And she was somebody who was already on our list she was at the very top. A lot of people auditioned for the part – there were a lot of women who would have been incredible that we were actively considering. But Florence just never left the conversation. She was also the last person who could actually tape for the part because she was on Park Chan-wook’s miniseries, so we saw a tape very late in the game, and the reason we hadn’t cast anybody at that point was because we were actually holding off, waiting for that tape. And when you get to that point – where you’re kind of holding everybody else up – the decision is already kind of half-made.

Although we see the movie from Dani’s perspective, Christian is almost as important to the way the story is told. He represents a certain kind of entitled white guy who acts selfishly and thoughtlessly, but always sees himself as the victim in any situation. He’s not a monster, but you both agreed last night that he’s the closest thing the movie has to a villain. How does an actor find his way into that?

REYNOR When I was reading the script, I was aware of all those things you’re saying. And I think that the best way to portray a character like that is to try and find places to fill the gaps between his bad behaviour with something empathic. And the distinction I find myself coming back to in my head is between the idea of him being a villain or being an antagonist. It might not be the same for other people, but for me a villain is somebody who is very intentionally going around causing harm. And I don’t think that selfishness and insensitivity necessarily make you a criminal, but they do make you an antagonist. I think we all have been there at one point or another, and we’ve all been on the other side, too. We’ve all experienced Dani’s feelings of need and suffering and trauma. So I think part of the experience for the audience is to look at it from both perspectives.

How deeply did the two of you go in figuring out Dani and Christian’s relationship? Did you even have the time?

REYNOR Florence and I are really good friends we have a very warm relationship. And I think that contributes to the dynamic between them feeling like something that’s lived in. You know, although the relationship is on the rocks and it’s dissolving right from the start of the film, you feel like, “Oh yeah, there’s a reason they’ve been together.” You can feel it in the background somewhere.

We had a week of preparation with Ari before we started filming, and we spent most of that time sitting in deep conversation about all kinds of things – about relationships, about our personal experiences of different things. One afternoon we did a little bit of improv – we set up Ari as a relationship counsellor, and Florence and I sat down in front of him and basically had a counselling session. He asked questions and we gave the answers in character, and that was very informative, too. I think all of that lends itself to the authenticity that seems to be there in the relationship.

Ari, you said you started working on the script as a breakup movie. At what point did you decide to make it about a breakup happening while the couple are trapped at a nine-day pagan solstice festival in Sweden?

ASTER Well, you know, I’m a genre filmmaker, and what I love about genre is that it forces you to find the catharsis in whatever story you’re telling. I was going through a breakup while I was writing the film, and I was sort of picking through the ruins of this relationship that had just fallen apart. That’s the kind of thing where you’re lucky if you find closure, but you usually don’t. You usually just accept it and move on. So this was a way of navigating that, in a way that allowed me to find this kind of perverse closure. And I do see the film as being primarily a perverse wish fulfillment fantasy.

We probably shouldn’t talk about that too explicitly, but the villagers do have a habit of reflecting and amplifying what Dani’s experiencing with Christian.

ASTER When I was writing it, I really wanted to have that be something that you could read into, have it be a conclusion that you could come to. But I wanted [the villagers] to be less abstract than that, and to have this lived-in, rich feel. Though more and more I find that I can’t watch the film at all without seeing them strictly as manifestations of Dani’s will. Everything they believe in – just their prime philosophy – serves to fulfill her needs. They’re there to sort of witness her experience and share in it, and they are like the ultimate co-dependent village. And so we begin with a dysfunctional, co-dependent relationship and we end with a functioning co-dependent relationship. But also if you look only at Dani’s story here, she loses a family in the beginning and gains one at the end. It’s a very different story for Christian and his friends.

We’re in a cultural moment where movies and TV are re-examining masculinity and entitlement in a way that we really haven’t since the 70s. At the screening last night there seemed to be a real split between people who understood what Midsommar is doing with that and people who didn’t.

REYNOR Yeah, I think it is split. It’s interesting the way you’re talking about the 70s and today, because I think – just as a society now – we’re reactionary in a way that people weren’t even 10 or 15 years ago, as a result of social media discourse, basically, and this constant connectivity. It makes people just really quick to respond to everything that they see. And I feel like if this was 15 or 20 years ago, people would probably allow the film to percolate through them and wait to respond. I think the conversation around the topic of masculinity in the film is really, really valuable, and I’m happy to see that there is a division in the audience and that people take different things from it. Whether it’s a harder sell or not, I don’t know.

ASTER Yeah, I don’t know either. I’m excited to see whether there is a debate, and hopefully there will be.

You’ve cited the films of the deadpan surrealist Roy Andersson as a key inspiration for Midsommar, which I think is both very apt and an incredibly deep cut.

ASTER My favourite of his is Songs From The Second Floor. I love his short film World Of Glory and You The Living and A Pigeon Sat On A Branch Reflecting On Existence. He made a film in the 70s called A Swedish Love Story – it’s absolutely brilliant and so funny. It’s such a bleak portrait of middle-aged disappointment, which is kind of what’s happening on the periphery. It’s a story about two kids falling in love, but really it’s about their parents, the adults in their lives. And it’s just so brilliant. That’s a film that I definitely went back to before making this one. I wasn’t able to show anybody on the crew Songs From The Second Floor. My cinematographer knows it and knows how much I love the film, so there are a couple of very explicit nods. There’s one in particular right in the middle of it.