He finished Bohemian Rhapsody after original director Bryan Singer was removed, and now the actor-turned-filmmaker has a jukebox musical about Elton John that's all his own 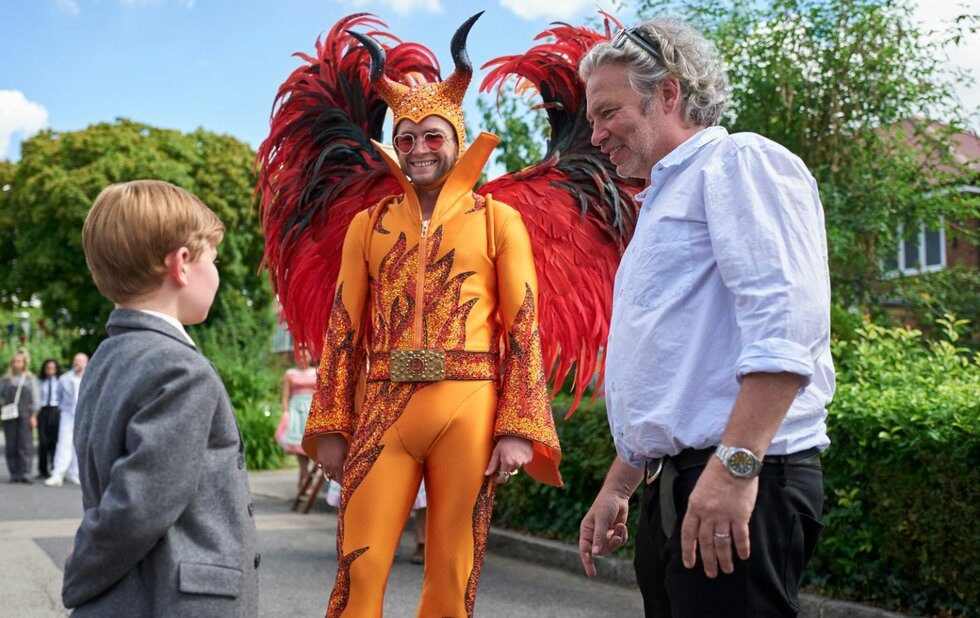 I am informed ahead of time that Dexter Fletcher would rather not talk about Bohemian Rhapsody, the Oscar-winning drama about Freddie Mercury and Queen that he completed after 20th Century Fox fired original director Bryan Singer somewhere towards the end of principal photography.

This is understandable, I suppose, but it’s something of an impediment to a proper discussion of Fletcher’s new film, Rocketman, a jukebox musical that uses the songs of Elton John to riff on the singer’s childhood and early stardom. The execution is very different – Bohemian Rhapsody is shaped with PG-13 delicacy, while Rocketman takes a more adult approach to its subject matter – but both films are splashy studio biographies of queer 70s superstars whose struggles with their identity contributed to their self-destructive tailspins.

And neither film was Fletcher’s first musical, anyway he took his first run at the genre with 2013’s Sunshine On Leith, a jukebox romance set to the songs of The Proclaimers. So he knows a little about the tropes… which is where our conversation started.

I wanted to talk about the casting of the supporting roles in Rocketman. It struck me that you went for a certain kind of stylized performance – Tom Bennett plays Elton John’s stepfather over two decades with this sort of over-the-hill Elvis vibe, and every time we see him I just grinned like an idiot – so many of the young Elton’s family memories are unhappy, but here’s this delightful man offering support and empathy and encouragement.

Yeah, he’s a lot of fun. And it speaks to a certain thing that you have to do in musicals, these giant stories where a person will appear and then disappear for 20 minutes, and you’ll need [his] impact even an hour later. So you’re casting the supporting roles even before you look at Elton John himself.

There’s also a broadness to a lot of the supporting character that feels very theatrical.

This is a musical, and at the root of that is a stage performance. And also, it’s not so much a biopic as it is a man going back through his memories – and memory allows things to be larger than life, and to be impactful in a different way.

It’s not movie acting, where everyone’s wandering around mumbling and being very understated. It can be Elton John’s memory of his stepfather or his first manager, or his first record producer … because he’s remembering them in this kind of haze, trying to understand who they are. I think when we think back on certain things that stay in our mind, they’re always bigger than they probably were at the time. And then when we retell the story three, four, five times, there’s always something that becomes a little bit larger or grander – because it’s become a story now, not just a memory.

He’s Elton John, for God’s sake! He’s got to be larger than life! And everyone around him has to reflect that as well, and it’s important that they make their impact, like Steve Graham and his father and Bryce. I mean, the most understated, kind of real performance, is Jamie Bell as Bernie [Taupin], because he’s the one real person who’s there. He keeps it all grounded. Even Richard Madden is a kind of hybrid, imagined version of an evil music manager.

I did want to ask about Jamie Bell. In a movie that’s so grandiose, he’s grounded and subtle – his reaction shots in the Your Song sequence make that moment so powerful.

I agree Jamie is absolutely phenomenal in the film. I would hope that he gets recognized in some capacity for that. Without that strength, that understated and rooted performance that he gives – you know, that’s what allows Taron [Egerton] to really fly. And they both know that Taron certainly is aware that without that very strong tether, he’s just in danger of floating around in the middle of nowhere and being completely bonkers. But because he’s still connected to that, because he still stops and turns back and says sorry – “I never appreciated how much I need you” – it keeps real. It keeps him tethered.

And Jamie disappears for the latter part [of the film], as well. [Bernie] has to be squeezed out of Elton’s life and the rest of it goes of control. And the less he’s there, the more Elton’s life is out of control. But he’s so strong, and such a presence, that when he does come back you really feel it – and hopefully you’ll be rooting for it to be there because Bernie is the voice of reason and somebody who genuinely loves Elton. Which is what he’s constantly searching for.

And dramatically, we know their partnership continued well after the period covered in the film.

Sure, sure. They sat side by side and watched it together in Cannes for the first time – yeah, it’s a very real, enduring friendship. But I suppose we [as an audience] only know Elton’s going to be okay, I suppose. It’s just sort of investigating how he got to be okay. Where he started out, and how he got to be happy.

And that’s the thing jukebox musicals tend to do – they all need to have happy endings, to send people out smiling. You’ve made Sunshine On Leith, you worked on Bohemian Rhapsody –

Do you think Bohemian Rhapsody is a musical?

I think it’s structured as one, yeah. Obviously it’s diagetic, where the songs only happen when people are singing in the film’s world, but certainly the set pieces are there, and the climax is structured to pay off like a musical. It’s got the elaborate sets and the heightened emotional stakes of a “proper musical.” There’s an aesthetic that they all share. Wouldn’t you agree?

Sure, sure – certainly Sunshine On Leith and Rocketman. I mean, I understand what you’re saying, but I don’t know how you could have a [Queen] biopic without music. No. It is a more traditional biopic, isn’t it, rather than a musical? The music sometimes leans into where they’re at emotionally –

But in terms of Bohemian Rhapsody, I think its best sequences are –

Yeah, I mean, it’s somebody else’s vision, so I can’t ask whether they envisioned it as a musical. I approached it as a biopic. But yeah, I see your point.

At least in practical terms, it’s a drama where the music and the actors’ performances have to synchronize it’s just not songs playing in the background.

Yes! And as in that movie, the lead actor has to capture and channel the very specific energy of a celebrity we already feel we know intimately. You’d worked with Taron Egerton on Eddie The Eagle, which was also a somewhat stylized biography. Did that give you two a sort of a shorthand for Rocketman?

Sure – because what I understand about the biopic, having been involved with them personally, is that you can’t be slavish to the facts, because then you’re ending up with a really complicated narrative. And unfortunately, for a movie you need [narrative] clarity so that people don’t go, “Well, hang on a minute – [Eddie] went to Germany for three weeks and then he actually went to Italy, and then he hung around Austria and he moved over to France and Italy and even came back to England for a couple of weekends!” You have to start telling a story. There will be people who are experts and those details are more important to them than what the emotional journey of the guy was. And that’s fine, but what I’m interested in is the emotional journey.

Like, I want to do a movie about ski jumping, but the ski boots that he wore back in the 80s no longer exist and are in fact illegal now. So if I wanted to be accurate, I would be breaking the law just filming it! So I had to use boots with modern bindings that are now deemed to be safe and legal – and for weeks, I wrestled over the cost of replacing it all digitally. I had to make a decision about what’s more important: the boots on his feet or the look in his eye? And of course I went for the look in his eyes, that’s the kind of filmmaker I am. Somebody else might have gone for the boots on his feet, which I believe is more important to some people. But I think that’s the joy of Rocketman – because we couch [the story] in this All That Jazz scenario, a man looking back over his life, that frees it of that restrictive point of view. You could let it fly in other, more dramatic ways. And I feel that’s got to take precedence, for me.

Well, it certainly gives the movie license to go as big as John and Taupin’s songs do.

Yeah. Yeah, exactly. And that’s what I needed, a framework that allows it to have those great highs. And those deep lows, as well they also dramatize [the story]. But it’s a celebration as well the music’s incredible, and the man led an amazing life. It’s not a film as a dire warning, like The Doors about Jim Morrison and the dangers of excess it’s not Requiem For A Dream. It’s a celebration, you know.

But it’s also aware enough to see the small tragedies, like the way it makes sure we see Renate Blauel [John’s sound engineer, whom he married in 1984 and divorced four years later] as collateral damage to his own identity crisis.

Yeah, I mean, I think there was no other way to approach it. When you hurt yourself to such a degree, other people do get hurt as well. And that’s the part he has to face up to in recovery: “I’ve hurt myself, and other people have hurt me, but I in turn have hurt other people and that’s something I have to take responsibility for.” It manifests itself in a very small moment when he’s mopping up a hallway [in rehab]: here’s a man who’s had to find some humility in order to just be himself again. You know, not to be chasing around everywhere, screaming and shouting at people he’s just there, mopping up the hallway. I find that quite endearing and funny and honest. And I think it’s great when he sits there and says, “I dragged her into all my madness. She didn’t deserve that.”

It’s just a tiny moment in the film, but it speaks volumes about the movie’s perspective. I’m really glad it’s in there.

Aw, brilliant. Thank you very much. That’s always the aim, to be honest. And I’m sure it was tough for [John], but he wanted it that way. And that’s what he got.