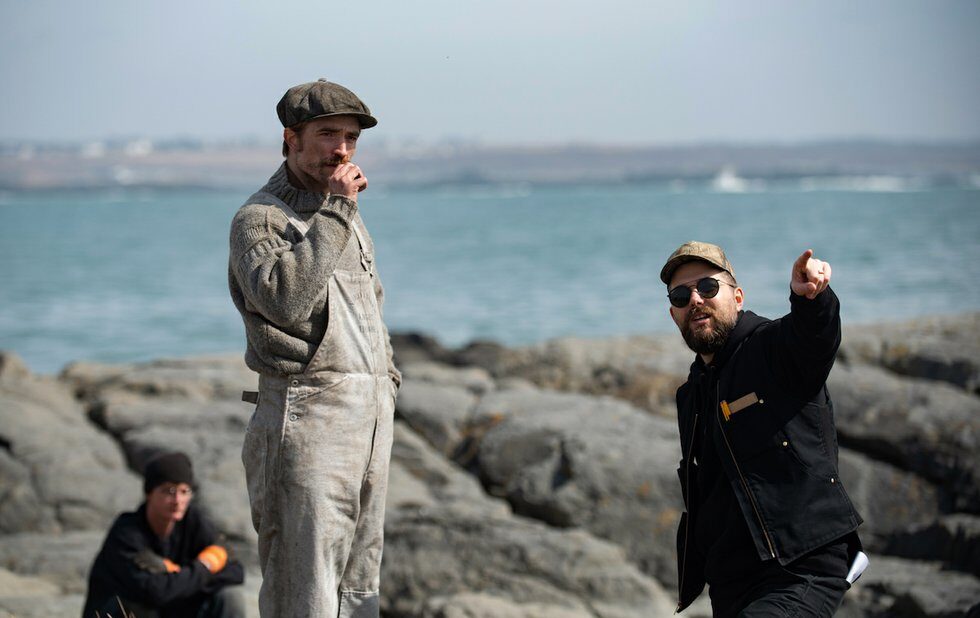 Robert Eggers (right) directs Robert Pattinson on the set of The Lighthouse.

Four years after bringing The Witch to TIFF, Robert Eggers returned to the festival with The Lighthouse, a deliberately antiquated horror movie in which Willem Dafoe and Robert Pattinson play 19th century lighthouse keepers getting on each other’s nerves – and experiencing some very strange goings-on – at a remote posting.

On paper, it’s a challenging experiment in texture, shot on film in the near-square aspect ratio of the silent era. (Eggers draws heavily on the exaggerated silent aesthetic, too.) But in practice, it’s weird and funny and totally committed to giving the audience a delirious night out, as well as a few uncanny chills.

So I noticed The Witch and The Lighthouse have one crucial thing in common: they’re both about flawed characters in bad situations who wind up making things worse for themselves. It’s very human horror we can all identify with that.

At least in this one I endeavoured to laugh about it, whereas The Witch takes itself very seriously.

Were you tempted to go all the way and produce The Lighthouse as a silent film?

I often want to make a [true] silent film or maybe like an ethnographic film in a foreign language that has doesn’t have a lot of dialogue, and I wouldn’t bother with the subtitles because you understand what’s happening. But in this film, there’s a lot of dialogue. And you look at Bergman and Dreyer and the Pinter/Losey collaborations – those are cinema. They are not filmed theatre. But they all come from theatrical traditions, and they understand the power of having a lot of dialogue scenes. And certainly those were influences, and having this be a two-hander, I was like, “I’m just going to lean into that and enjoy like that aspect of it.”

When we talked about The Witch in 2015, you said you wanted to translate a Puritan’s nightmare onto the screen, as if you were just uploading it from his mind. So what was your way in for this one?

Three years into getting The Witch financed, I was hanging out with my brother and he was like, “I’m working on this script. It’s a ghost story in a lighthouse.” I thought, “Damn, that’s a really good idea, I wish I’d had it.” And I had this two-shot of the two lighthouse keepers in this crusty, dusty, musty, rusty, pipe-smokey cod-smelly stinky keeper’s cottage, in black-and-white 35 millimetre. I just kind of had this idea. Then a couple months later he was like, yeah, the script’s not really coming together,” I was like, “Can I try something?” His script was actually a very different story.

Is that always how your ideas form? An image that won’t go away?

The atmosphere and the aesthetics tend to get me going. Even with The Witch, there was that Puritan’s-nightmare [concept], but it was more than that. As a kid, picturing people who grew up in the reign of Queen Elizabeth I walking around in hose and latched shoes in the woods behind my house was an interesting atmospheric thing for me. So that’s often where I begin. People who don’t like my films might say, “That’s your fuckin’ problem.” [laughs]

So much of The Lighthouse comes down to the dynamic between the leads: if they don’t deliver that tension, the movie dies. You’re asking for a very specific mode of performance. Was it a hard sell?

I was super fortunate that both Robert and Willem wanted to work with me. I was totally shocked when Willem Dafoe’s manager said that he wanted to have lunch with me. So Willem and I had always been sort of looking for something I had asked Rob if he wanted to be in another film that I had written that didn’t end up being greenlit, and he was playing a sort of posh, cigar-smoking dandy. He was like, “Nah, I’m looking for stuff that’s challenging and weird. But let’s find something.” When The Lighthouse, bizarrely, became the film that people wanted to greenlight, it was really clear that those were the only two people to play the roles. And I knew that they would want to do it. There wasn’t a lot of convincing, because the only question they’d really ask is, “Who’s playing the other person?” And they both thought [the other] would be cool.

Is it really so bizarre that someone would greenlight this? It feels like a logical continuation of the thing you do in The Witch.

Well, making a black-and-white movie at this budgetary level is technically irresponsible in today’s marketplace because studios depend on various presale things with HBO and whatever. So it is a financially irresponsible decision.

But this is your shot, right? After The Witch you were supposed to be able to do the thing you want to do.

Absolutely. But the standard thing for an American filmmaker who has an indie success [with a genre project] is to do a big franchise movie, which is not what I was interested in doing. I was interested in doing an original piece at a slightly larger scale that would be slightly more palatable for a larger audience, but it just was not to be at that time. So I’m super privileged that RT Features and Regency and A24 let me do this, and let me do this my way.

I suppose once you’re shooting out on the Nova Scotia coast, the idea of approvals and supervision is moot…

There were virtually no compromises that didn’t have to do with weather or physics or time. Creatively, they let me do my thing. Obviously I had to talk about why I made certain choices Michael Schaefer at New Regency, who has given me some incredible notes for this film that made it way better. And he’s been incredibly supportive. He called me pretty near principal photography, saying, “Are you sure you want to shoot it in this aspect ratio? Are you absolutely positive?” And I just kind of talked for half an hour about why it needed to be this aspect ratio, and he said “Okay, okay, let’s just get off the phone.” [laughs]

So that’s the secret, you just wore him down?

I guess. But it wasn’t like they weren’t behind it. They understood the choices I was making.

Speaking of those choices – there are moments when it feels like we’re watching something that was made in a time when people yelled actual mythological curses at each other. It’s like an artifact. It’s just so specific.

Thanks for getting it, because I think that some of the mythological symbolism is heavy handed. This movie in general is extremely heavy-handed, that’s the type of filmmaking it is. [Cinematographer] Jarin Blaschke and I were like, “Well, at least we’re making strong choices. I don’t know if anyone’s going to like this thing, but we are making choices, and we’re sticking to them.”