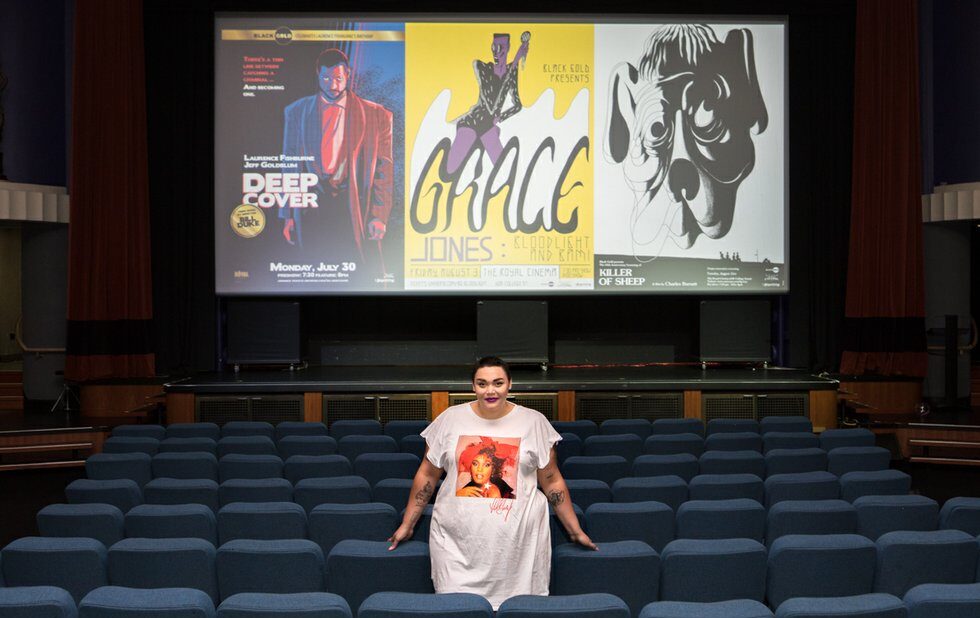 Wonder why Toronto’s repertory cinemas are putting up lovingly bespoke posters for movies you haven’t thought about in forever? It’s because big-screen revival series are back in a big way, offering audiences the chance to discover a buried treasure – or reconnect with an old favourite – with an enthusiastic crowd, a knowledgeable host and sometimes even a floor show.

Every week, we’ll spotlight someone behind one of the city’s specialty screening series – and let them pitch their latest event.

Sarah-Tai Black, writer, critic and programmer at the Royal Cinema (608 College). You may know her on Twitter as @sarahtai.

Black Gold, a screening series at the Royal on Monday (July 30) at 8 pm, in celebration of Laurence Fishburne’s birthday.

“I would consider Black Gold to be a look at Blackness on film through a feminist lens,” says Black. “It’s really important to me as a Black, queer woman to really widen up the scope of what an icon is. I’ve found most rep cinemas that highlight Blackness on film veer toward more male-centered exploitation or genre fare, which is fair enough in some sense – there’s a lot of great stuff there. But Black Gold is really about mixing it all up. Whether it be art films, experimental documentaries, cult flicks or a Hollywood blockbuster, Black Gold is really about not being trapped within any one definition of Blackness.”

“I like to show things that might not be normally seen in repertory cinemas or under the banner of ‘Blackness on film,’” Black explains. “Shirley Clarke’s Portrait Of Jason earlier this year, for instance. At the same time, I am a huge proponent of reclaiming films that have been dismissed from the canon due to respectability politics or film snobbery,” citing Hype Williams’s 90s crime drama Belly and the 80s horror comedy Vamp, which featured Grace Jones.

“Anyone who has seen me introduce films – which I do at every Black Gold screening – knows that I have a very critical eye through which I present the series, but that I also have a lot of fun with it! We’ve got prizes at every show from our lovely sponsors, the Beguiling and Eyesore Cinema. This is a space I’ve made to celebrate and centre Blackness and Black art and performance. It’s really important to me to have an ongoing space where folks like myself and others who haven’t been represented – both on stage or in the cinema seats – can see themselves, or alternatively, see themselves being seen. I think rep theatres have historically been very racially coded spaces, and I really want to change that.”

“Deep Cover does some really interesting things with Black identity [within] the neo-noir spectrum,” she says. “It’s full of surprises, original ideas and this really rare political lucidity – all under the helm of a Black director and a Black star. It’s quite heavy in its subject matter, but at the same time has these sincere camp elements to it that lighten it up without undermining its message, which is this very pointed indictment of the war on drugs and its exploitation of Black communities. Also, I love Laurence Fishburne.”

“On August 3, we’re celebrating my icon, my queen, my soul – Grace Jones – with a screening of Bloodlight And Bami,” Black says. “And on August 21, we’ve been able to get a 35mm restoration print of Charles Burnett’s truly stunning film Killer Of Sheep. I’ve got some Claire Denis dreams planned for the close future and I would love to screen Sun Ra: Space Is The Place again, just because.”