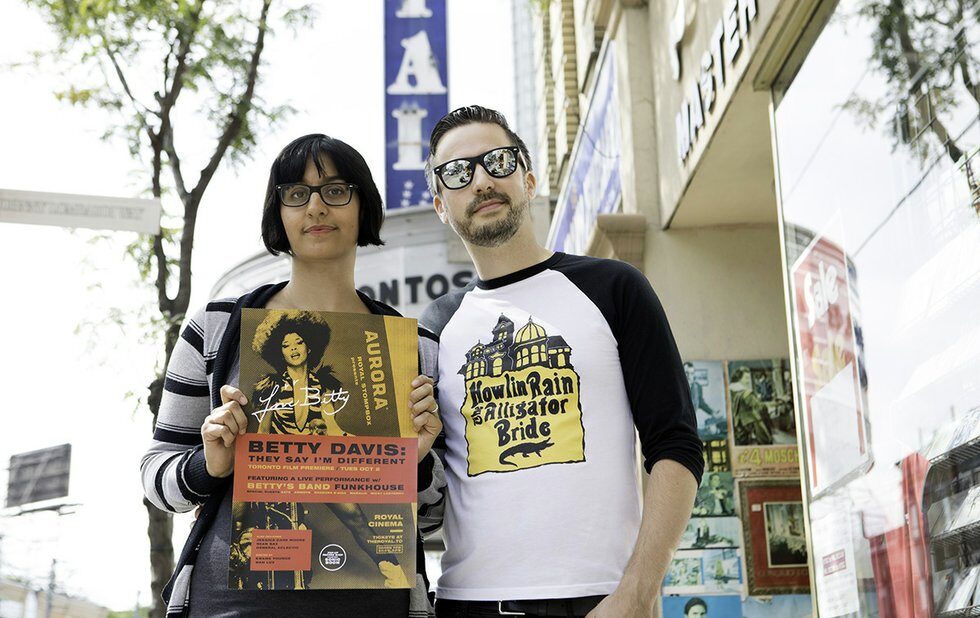 David Bertrand and Jennifer Idems-Bertrand, former co-head programmers at The Royal who’ve downshifted slightly after having their second child. But they still program select screenings, including the Royal Stompbox series.

Royal Stompbox, at The Royal Tuesday (October 2) at 8 pm.

Betty Davis: They Say I’m Different, a new documentary about the 70s funk rocker who changed the face of R&B, married (and divorced) Miles Davis, and vanished for three decades, resurfacing in recent years on her own very specific terms. This screening will be followed by a live performance by Davis’s original band, Funk House, accompanying local vocalists Sate, Ammoye, Shakura S’Aida, Nicky Lawrence and Amalia Mamalia as they cover Betty’s hits. Check out NOW’s exclusive interview with Betty Davis here.

“It’s a monthly music-on-film series that celebrates the greatest in music-centric features, concert films, music documentaries, unique one-off live performances and live scores to classic films,” says David, listing previous events like a double bill of Purple Rain and the Nigerian Purple Rain, regular screenings of Ziggy Stardust And The Spiders From Mars for David Bowie’s birthday, and a screening of Heartworn Highways with a live performance by Blue Sky Miners. “That turned out to be the film’s first ever theatrical screening in Canada!”

“We’re not constrained by a specific genre or theme,” adds Jennifer. “As long as it’s music-based, it fits our programming bill! We’ve done all sorts of films – new and classic music docs, Bollywood, musicals, and cult oddities sometimes paired with live performances.”

“We really want to create a fun experience for the audience that they won’t get by watching a film at home,” says Jennifer. “We always do a curated pre-show, introduction and prize giveaways. We try to incorporate live performance whenever we can and we’ll often organize after-parties to keep the fun going.”

“Not to mention the DJs and guest speakers and a pop-up record shop in the Royal lobby,” says David. “For me personally, this is maybe the most exciting show I’ve put together in 15-odd years of hosting events.”

“Betty Davis is an incredibly fascinating artist,” Jennifer says. “She’s highly influential, but still not very widely known outside of certain music circles. She released only three studio albums (produced and arranged herself) in the early-to-mid 70s then faded into obscurity. The result is some of the most uncompromising, blistering, and hyper-sexual funk in existence. Betty really paved the way for every sexually liberated performer out there – from Prince to Janelle Monáe. She is a funk goddess who is criminally under-known. I hope this movie can change that.”

“They Say I’m Different is a thoughtful, philosophical, personal journey,” David says. “It’s maybe not the funk party people expect? But rich and rewarding. And then Funk House will take the stage and I assure you, we are gonna get down. If you miss this one, you will be sad.”

“We are extremely pumped for our next event on December 13,” says David. “It’s the return of Balboa, Toronto musical heavyweights covering the music of Rocky 1 through 5. Expect to see some of Toronto’s finest musicians take the stage, busting out the hits while Rocky montages play on the big screen. It’s gonna be one for the ages.”