DETROIT directed by Kathryn Bigelow, written by Mark Boal, with John Boyega, Anthony Mackie, Hannah Murray and Will Poulter. An. 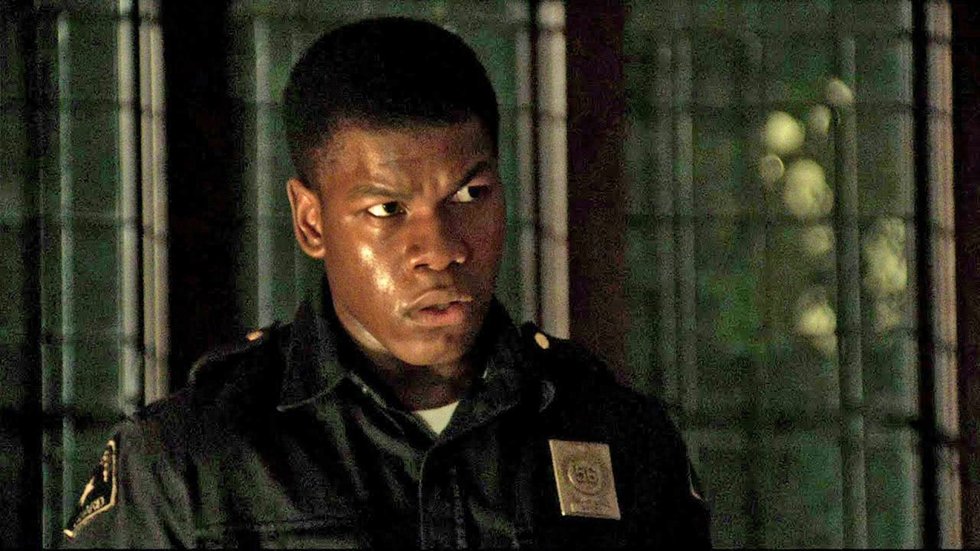 John Boyega doesnt say very much in Detroit, Kathryn Bigelows gripping docudrama about that citys 1967 race riots. He doesnt have to.

As Melvin Dismukes, a security guard drawn into a nightmarish siege at the Algiers Motel when police effectively take the residents hostage to find an imaginary sniper, Boyega does most of his work with his eyes and his body, moving back and forth between rooms and hallways trying to keep a bad situation from getting any worse.

How well Dismukes succeeded in his task is an open question when the siege ended, three people were dead and half a dozen more had been beaten and terrorized.

In Michigan for Detroits world premiere, Boyega the charismatic star of Attack The Block who vaulted to international fame as the rebel stormtrooper Finn in Star Wars: The Force Awakens discussed his perspective on the movie, and what hes doing with his newfound visibility.

What sets Dismukes apart in this situation, Boyega explains, is he was brought into a situation he did not prepare for. So hes not only representing a man whos just trying to ride the balance and make sure everyone is safe, but also he represents us. He is us in this kind of situation. I remember telling Kathryn, Kathryn, Dismukess silence is very loud. She started laughing. All this craziness is going on, you understand what side each person is on what they want and what their intentions are and youre left with this guy, this figure in a uniform who stood there in the middle of a corridor in the Algiers Motel, trying to mediate, trying to communicate between both sides.

When we spoke, Boyega was just hours away from meeting the man for the first time but theyd spoken on the phone innumerable times while the actor prepared to play him.

If I didnt have access to [the real] Dismukes, I probably would have been a bit more scared to handle a role like this, Boyega says. Speaking to him really gave me perspective. At each point when the cameras were rolling I knew exactly how he felt, because we would have had that conversation prior to shooting. Hes very open, very willing to have a conversation, and I could call him whenever I wanted to ask a question because I was overseas or if I had a surge of curiosity about something.

At all times, I had to consider him, because the worst thing youd want is for someone to be upset about the way you portrayed him.

Entertainment is supposed to offer you a bubble to escape for two hours and a bit, and the bubble either sustains you and makes you want to stay inside, or it pops and youre just kinda like, Oh, cool, that wasnt to my taste, Boyega says. Detroit offers no bubble. Its a reality that we all know about, that exists even when you walk out [afterward]. When I walked out, I didnt have much to say. It took me a few days to figure out what Id just seen. The way its shot, the performances, the integrity of the research the fact that we have people who were there at the time, in this specific situation, who are alive today to guide the truth of this project its the closest were going to get to the real situation. Its not a bubble, its a window.

The Algiers Motel incident happened half a century ago, but Boyega found context for his performance in the here and now. Shooting a key scene in which the innocent Dismukes is interrogated by two white detectives bent on implicating him in the Algiers Motel deaths, the actor found himself overwhelmed by its resonance with the present day.

I had to rush to find a mental connection, he says, and the images of Sandra Bland and Trayvon Martin, those images come into your head. The movies set in the 60s, but youre thinking, Wow, these things are still going on. Theres stuff that happened last year, theres stuff that happened a few months ago. My hands just naturally started to shake, just because of the reality of that. This could happen to anybody, you know?

A number of key Detroit players Boyega, Will Poulter, Hannah Murray and Jack Reynor were cast in the UK rather than the U.S. Asked if being raised outside of America gave him a different perspective on playing Dismukes, Boyega demurs.

I understand that perspective, but I dont particularly know … first off, Im Black, you know what I mean? he laughs. That in itself is a reality in terms of the Black experience there are certain conversations you have as a Black person that can be different to others.

But the major thing for me is that none of the actors, American or not, were there at the time. We were all on a journey of discovery like, Id heard of the Detroit rebellion before, but Jason [Mitchell] hadnt particularly heard of it, and Algee [Smith] had heard slightly different stories.

So we all had a different perspective, but what brought us all on the same page, British or not, was that we all had to discover our characters, we all had to figure it out.

Boyega who returns as Finn in The Last Jedi this Christmas and co-stars in Pacific Rim: Uprising next spring plans to alternate between studio blockbusters and smaller, auteur-driven work.

I want to be in movies Id like to watch, he says, and sometimes I say I have a taste for the whole buffet. And I want to do movies that are reflective of our world, and make a statement about it or offer us various perspectives, which I think Detroit does. It was very important, at this time in my career, to be a part of something like this. I just felt like I would have missed out witnessing this doing something else, you know?