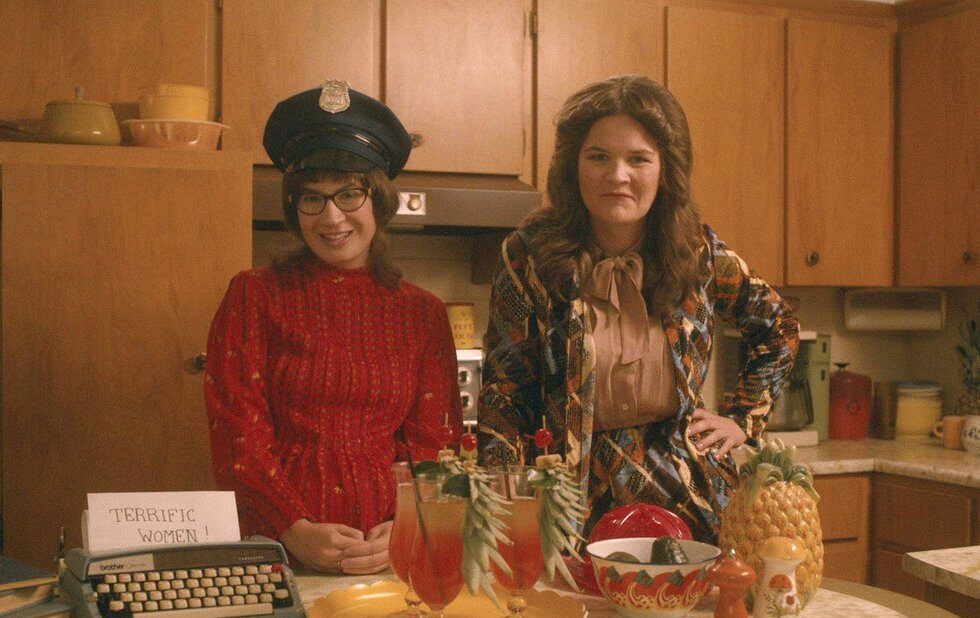 Strong, single and semi-sloshed, these two BFFs – one twice-divorced and staunchly feminist, the other massively pregnant and slightly obsessed with finding out the identity of the father – entertained audiences at The Ossington with a live talk show, interviewing weird guests and talking about the issues of the day.

That led to some cooking videos and a gala show at Buddies In Bad Times. Now, the fake talk show became a real fake talk show: Hennessey and Kaliner have launched Terrific Women as a digital series, which just went live on CBC.ca.

“You get to a certain point where you’ve done the live show for a while, and you’re wondering, ‘What’s our next step? What’s our goal?’” says Kaliner, who plays nervous mother-to-be Joy. “And you kinda want to get paid at a certain point, if possible.”

Over nine episodes, Terrific Women finds Linda, Joy and their sidekick-slash-bartender Alejandro (Phil Luzi) interviewing weird guests, talking about the issues of the day and drinking bespoke cocktails. It’s all very 70s, in a way that makes people who lived through that decade – or at least me – a little uncomfortable.

“I love how you’re constantly shuddering,” Hennessey says when I sit down with them at the CBC. “It’s making me laugh because we’re actually 80s babies. We’re impostors here, doing the 70s thing. But people who lived through it are cringing.”

Can you blame us? The show has an excellent feel for the period, from the zoom-happy camerawork to the artificial fabrics sported by virtually every character.

“Everybody involved really got into it,” Hennessey says. “Juliann Wilding did the costumes and the props department was crazy, the food was insane – I wish we got tighter close-ups of all the food. I feel like we should do a cookbook or something at some point, because I am so impressed with the food. And the cocktails.”

Not much has changed about Terrific Women on the journey from stage to screen Hennessey and Kaliner know their characters inside and out, and they knew what the major themes would be. The trick was finding the right visual aesthetic.

“We started watching Rhoda and stuff like that,” Hennessey says.

“Just the way people address the audience and the camera, it really went along with our style,” Hennessey says. “Everything’s a little creepy.”

And as they binged on 70s shows, a few key themes emerged.

“There’s an openness about sex, but then also the gentleness of going to a roller rink, you know?” says Kaliner. “It’s really innocent but also people were really embracing exploring their bodies. It’s just such a weird time. You watch Donny & Marie and it’s, like, so vanilla … but then there’s something eerie about it.”

“There’s so much humour there,” Hennessey says. “I always find the aesthetic quite goofy – the large pointed collars, the jumpsuits, just people being like ‘I look terrific.’ And you’re like, ‘What?’ The shag carpets, the polyester. Everybody was a fire hazard.”

One sacrifice was required: Hennessey and Kaliner couldn’t wear their stage wigs for the shoot. That’s their own hair, styled into a nightmarish echo of some bad 70s decisions.

“We wanted it to look less like sketch comedy and more as realistic as possible,” Hennessey says.

“They actually cut my hair into the Brady Bunch mom look,” Kaliner says.

“It really helped me find the character,” Kaliner says.

And who are Joy and Linda, really?

“They’re two women who think they’re very progressive but they’ve done no research and have no credentials,” Kaliner says. “They’re just doing their best and just kind of bullshitting through it.”

“It’s layered for us,” Hennessey says. “We can really play with the contradictions of what people are really like. People aren’t just one thing or another thing, so it’s really fun to explore that.”

It’s also fun to find new angles on characters they know inside and out. Hennessey and Kaliner are so comfortable as Linda and Joy that they’ve even done personal appearances in character.

“These people contacted us and said, ‘Hey, we’re big fans of your live show, will you come do a bachelorette party?’” Hennessey recalls. “We were like, ‘Yeah, man!’ And then they were really into it! We were like, ‘This is nuts,’ but we loved it.”

“And then we stuck around and just hung out with them,” Kaliner laughs. “We held them hostage for like two hours. We ate their cupcakes and drank their wine.”

All nine episodes of Terrific Women are available now at cbc.ca/watch. 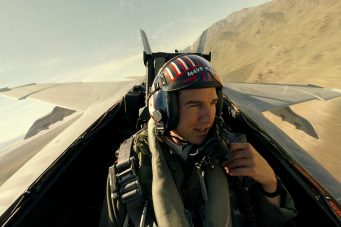 In a multiplex landscape littered with green screen aesthetics, the sequel to the 1987 Navy propaganda movie soars