Toronto-shot sci-fi series, which premieres its third season this week, is the only show on TV that has such a powerful ensemble of diverse women of colour, says actor Cara Gee 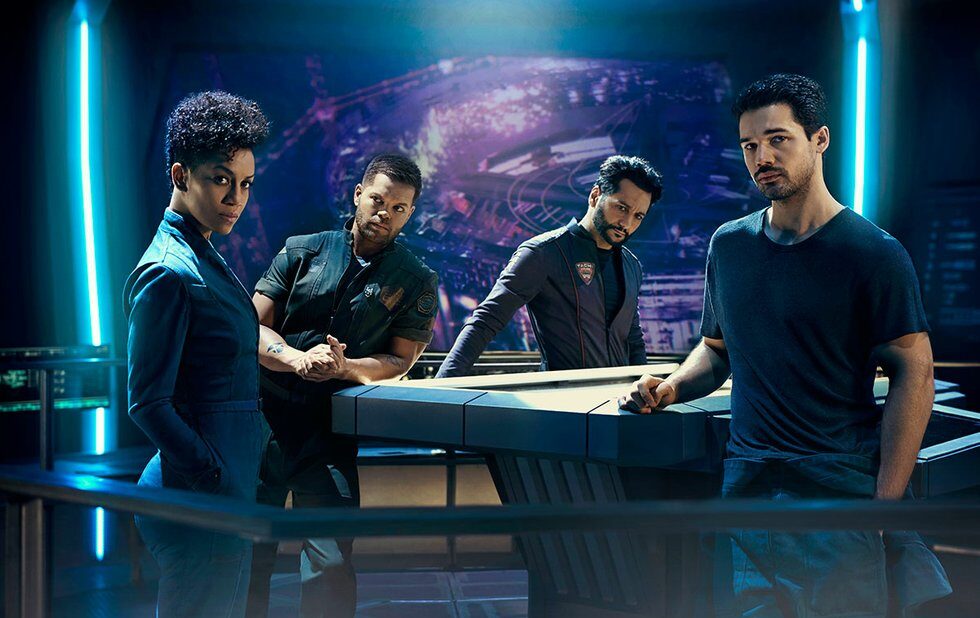 The Expanses commitment to progressive values springs from the sci-fi source material.

THE EXPANSE (season three) airs on Space on Wednesdays at 10 pm.

With a diverse cast and progressive politics to match, sci-fi series The Expanse is setting the bar for TV in ways that resonate beyond genre fiction.

Premiering its third season on Space this week, the Toronto-shot action thriller is based on the series of novels by James S.A. Corey, the pen name of writing team Daniel Abraham and Ty Franck.

“We don’t have villains,” explains showrunner and writer Naren Shankar via Skype, a decision that encourages viewers to empathize with three sides in an interplanetary conflict.

The story is set roughly 300 years in the future, when Earth has colonized both Mars and the resource-rich asteroid belt. The search for a missing girl reveals a conspiracy to pit Earth against its colonies.

Though it might be easy to immediately identify with Earth’s cause, it’s also just as easy to understand the motivations of the militant Martians, working hard to protect what little they have while they attempt to terraform their planet.

Or the motivations of the solar system’s working class, the “Belters,” an oppressed faction of people trying to organize in spite of being dispersed throughout the solar system.

“An idea we come back to over and over again in the series is that people tend to tribalize, and problems start when they’re able to define someone else as the enemy, or as the other,” says Shankar, whose TV sci-fi writing credits include Star Trek: The Next Generation, Deep Space Nine and Voyager. He also produced The Outer Limits and Farscape.

One way the writers define the different social dynamics is through gravity, which is used as a metaphor for structural inequality.

Humans born on Mars or in the zero G of the Belt, experience Earth’s gravity differently. From the motion sickness Martians feel, to outright torture on Belters’ fragile bodies, the message is clear: where you are born, live and work plays a major part in the privilege available to you in life.

Toronto actor Cara Gee says the show’s class system was crucial to her understanding the driving force behind her kick-ass Belter character, Drummer.

“I was incredibly drawn to the idea of the Belter underclass,” says Gee, who is Ojibwe, over the phone from Los Angeles, where she has recently relocated. “How from certain perspectives the [Belters’ political movement] is seen as a terrorist organization, but really all they want is clean water and human rights.

“As a Canadian, that resonated because we are asking people in our country to live with that,” she continues. “There are so many communities that don’t have clean water.”

Gee was a fan of the show before she got the part, giving her insight into the story and the Belter accent she uses as Drummer. She cribbed it from Belter leader Anderson Dawes (Jared Harris) for her audition. Now she gets lessons from the show’s dialect coach, Eric Armstrong, to ensure her accent – whether speaking in English or the show’s Belter ‘creole’ – is right.

Gee’s casting is also a credit to the show’s commitment to diversity, something Shankar says springs from the source material.

The Expanse includes many realistic elements, from the way the ships move through space to gravity’s toll on the human body. That realism also drives casting choices.

“It’s not a world in which the only people who went into space were white Nebraska corn-fed boys,” he explains. “The races that went out into space were really representative of the human race. Every ethnic group mixed and mingled, so you get very unusual names and combinations of ethnicities.”

Though Drummer’s race is undefined in the books, Shankar says casting Gee was an opportunity to “really dive into somebody who represents Belters ethnically, socially, culturally.”

In season three, she will have a story arc that goes beyond her character’s role in the books. “We really loved what she did in season two,” Shankar says, “so we decided to make her a bigger part of the show.”

“To the best of my knowledge, this is the only show on television that has this powerful ensemble of diverse women of colour,” Gee says. “Each of us – and there are so many of us – play powerful characters who are in leadership positions and who are totally multifaceted and complicated. It’s incredible to be part of that.”