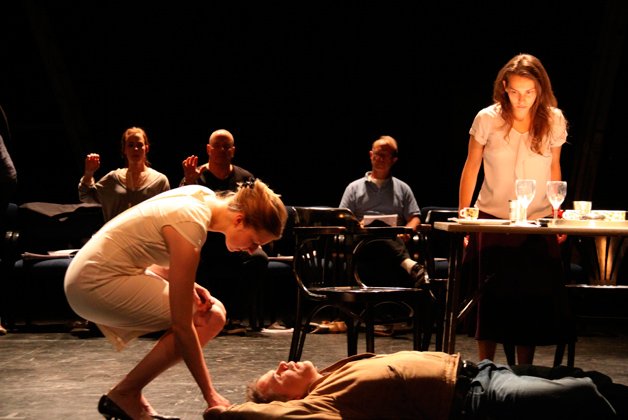 Every year, TIFF gets flashier and more aggressive with its red carpets, corporate photo suites and marketing-driven “brand activations.” (We still don’t know what those are, but we do know they’re really annoying.)

The movies – remember the movies? – tend to get lost in the hustle of Festival Street… especially smaller productions from directors whose names aren’t Atom Egoyan, Zacharias Kunuk, Alanis Obomsawin and Alan Zweig. In that spirit, we thought we’d highlight 10 titles to keep an eye on as the festival gets underway.

For her first feature, writer/director Semi Chellas – who cut her teeth writing on Mad Men and The Romanoffs, among others – tackles Susan Choi’s novel about radical 70s politics, publishing, and Patty Hearst. Hong Chau stars as a seasoned revolutionary charged with minding a trio of high-profile activists (Sarah Gadon, John Gallagher Jr., Lola Kirke) while they write a book, only to find her charges don’t particularly want to be watched over. That should go well.

The sole Canadian entry in this year’s Platform competition, Kazik Radwanski’s latest follows a daycare worker (the reliably brilliant Deragh Campbell) who has trouble with ordinary interactions. Radwanski’s Tower and How Heavy This Hammer drilled down into the heads of Toronto misfits, so this would appear to be cut from the same cloth… thought neither of the previous films took their heroes skydiving.

Sophie Deraspe, director of Vital Signs and The Amina Profile, transposes Sophocles’s classic to contemporary Montreal, and makes its principal characters a family of immigrants trying to start anew after their parents’ murder. Relative newcomer Nahéma Ricci plays the young hero determined to do whatever she must to keep her family from falling apart.

High-school drama and seething misogyny power Nicole Dorsey’s first feature, which tracks the lives of a teenage girl (Ella Ballentine of the Anne Of Green Gables TV-movies) and a twentysomething man (Bad Blood’s Ryan McDonald) on a collision course with one another in a small Newfoundland town in 1987. You’ll never listen to Gowan the same way again.

Jeff Barnaby’s long-awaited follow-up to Rhymes For Young Ghouls – which kicks off Midnight Madness this year – has a brilliant hook: as the world is devastated by a zombie plague, a Mi’gmaq community that’s somehow immune must debate whether to risk their own safety by taking in survivors. The predominantly Indigenous cast features Rhymes breakout Kawennáhere Devery Jacobs, Michael Greyeyes, Elle-Máijá Tailfeathers, Brandon Oakes, Gary Farmer, Forrest Goodluck and Kiowa Gordon.

Kathleen Hepburn (Never Steady, Never Still) and Blood Quantum’s Elle-Máijá Tailfeathers co-direct and co-write this drama about two Indigenous women from very different circumstances – one (Violet Nelson) in crisis on the streets of Vancouver, and the other (Tailfeathers) who finds her and brings her home to see if she can help. Read our interview with the directors here.

Castle In The Ground

Joey Klein’s devastating romance The Other Half was a study of two broken lovers determined to heal each other’s damage his new film appears set to reverse the dynamic, telling a story about neighbours (Hereditary’s Alex Wolff and Green Room’s Imogen Poots) whose unexpected connection in the midst of Sudbury’s opioid epidemic threatens to break them beyond repair. Neve Campbell, Kiowa Gordon and The Other Half’s Tom Cullen co-star.

Five years after his South Korean generational drama In Her Place, Toronto director Albert Shin returns with a very different sort of movie: a psychological thriller about a haunted woman (Sense8’s Tuppence Middleton) who comes home after her mother’s death to be drawn into a conflict with her sister (Hannah Gross) over the sale of the family’s Niagara Falls motel. Also, she’s convinced she witnessed a kidnapping as a child. So that’ll complicate things.

The latest from Toronto filmmakers Yonah Lewis and Calvin Thomas (Amy George, The Oxbow Cure) casts Kacey Rohl (Hannibal, The Magicians, Arrow) as a college student who’s faked a cancer diagnosis and must now continue her deception by any means necessary – whether that means keeping her father (Martin Donovan) from exposing her, or tripling down on her lies to her supportive girlfriend (Amber Anderson).