It’s December in Niagara Falls. There are grey skies, periodic snow squalls and not very many tourists.

We’re at the Flying Saucer, a UFO-themed restaurant where Toronto filmmaker Albert Shin is shooting a scene with Sense8 star Tuppence Middleton and Mindhunter’s Hannah Gross.

There’s a thin veil of secrecy around this particular production. Usually, I’m not allowed to tell anyone until the agreed-upon time what I witness on a movie or television set. This time, I’m barely allowed to acknowledge the movie’s existence.

The movie is Clifton Hill, named after the carnivalesque tourist trap opposite the Falls, with its midway, wax museums and SkyWheel. But if anyone asks, I’m on the set of Jane Of The Desert.

“We have a fake production name,” Middleton tells me during a scene change, “so [people] don’t think that it’s too much about the location.”

The real title, and the fact that Shin is making a film with Middleton and Gross, won’t be announced for another week, when the production gets the hell out of Niagara Falls.

“There were certain people in the city that would rather us not have been there,” says Shin, speaking to me months later at a Leslieville café. “We tried to be as low-key as possible.”

Shin’s film, which he co-wrote with James Schultz, is a moody and gleefully weird thriller about a pathological liar (Middleton) scouring the seedy side of one of Canada’s biggest tourist attractions during its off-season, looking for answers to a possible abduction she witnessed as a child.

The film, which world premieres at TIFF, is Shin’s love letter to Niagara Falls. The affection isn’t entirely mutual. While organizations like the Niagara Parks Commission were helpful with securing shooting locations for the production, others like the Clifton Hill BIA were chafing at its presence.

“We’ve had people trying to film things here with heroin addicts and things like that on the Hill,” Nick Tritchew, senior manager in digital marketing at the Harry Oakes Company (HOCO), tells NOW. HOCO is named for the historic baron and gold prospector whose family is behind Clifton Hill’s biggest attractions.  Along with other stakeholders at the Clifton Hill BIA, HOCO wouldn’t accommodate the film production.

“We’re not going to allow you carte blanche access to our property to depict the Falls in a negative light again.”

There’s a lot of sensitivity about how the Niagara Falls area is portrayed, particularly after a short film made by Ryerson University students contrasted the blinding lights on Clifton Hill to the dilapidated houses and other signs of a depressed economy in surrounding areas. That short, As Niagara Falls, grabbed headlines in 2017, when Ryerson president Mohamed Lachemi apologized to Niagara’s mayor and tried to distance the school from its students’ work. The apology made the student film far more visible.

“Every town in the world has some black eyes,” says Tritchew, describing the short’s portrayal as unfair. “Do you think Toronto is gleaming and polished in all corners?”

He expresses concerns about Shin’s Clifton Hill, worrying it will focus on sleazy and sketchy aspects that may have been more true of Niagara’s past, when tourism hit a lull, before casinos and other giant attractions tried to make the area a year-round destination.

“Our owners have been spending a fortune over the years trying to make a very Disneyfied experience,” Tritchew continues, going on to describe the kind of productions they welcome. “We’ve had music videos and other things that were on the up and up showing a gleaming amusement-park-like setting.”

The Clifton Hill BIA was hoping for a depiction of Niagara Falls that’s more in line with what it is today. Though set in the present, Shin’s vision is a hall-of-mirrors-style film shaped from faded memories.

“This movie is actually based a lot more on my real life than In Her Place,” says Shin.

His earlier intense, prize-winning drama was about secret adoptions in South Korea, an issue that has “touched” his family. The filmmaker, whose work is always tethered to very specific locations, shot In Her Place on his uncle’s farm. For his follow-up, Shin revisited another family location.

Shin’s parents owned the Niagara Gateway Motel near Clifton Hill when they first immigrated to Canada from South Korea. They moved to the Toronto area by the time Shin was born but visited Niagara Falls almost every weekend during his childhood, staying connected to the place and friends the family kept there. 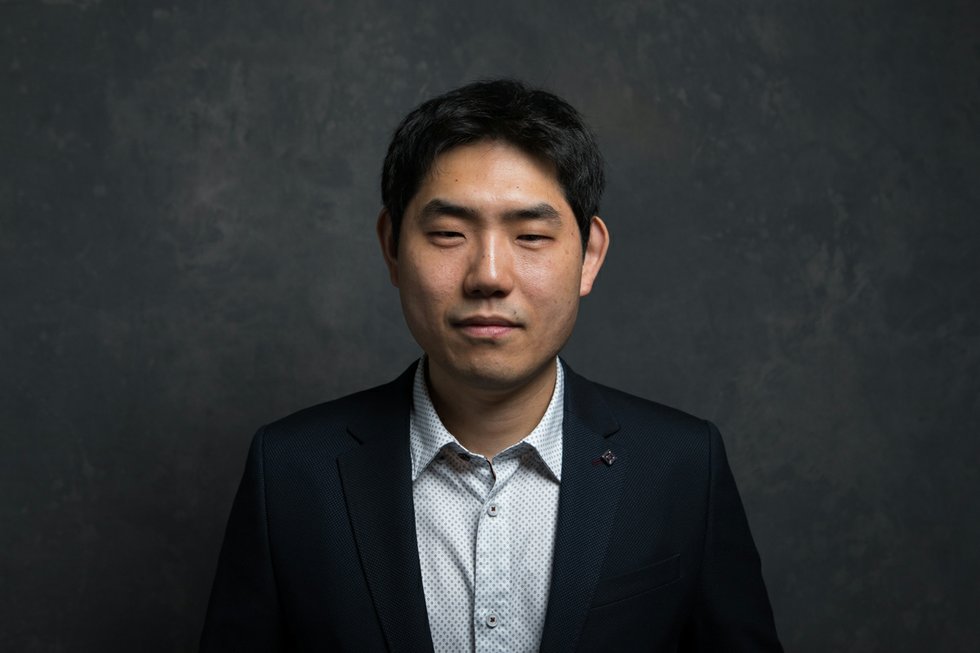 On one weekend trip, when the family was fishing at their regular spot on the Niagara River, Shin witnessed what might have been a kidnapping. He was around five or six. The director says the memory is repressed, resurfacing every so often, perhaps with a little more colour than when he originally remembered it. That memory is recreated in Clifton Hill’s prologue, where a little girl named Abby spots a wounded boy hiding in the woods.

“What I did see for sure was a guy take a boy, throw him in the trunk and beat him with a tire iron,” says Shin. “To this day it’s seared in my head. He was saying something like, ‘Shut the fuck up or I’ll beat you again.’ He slammed the trunk and then drove off.”

Shin’s not entirely sure what to make of what he saw. It could have been a horrifyingly abusive domestic situation. But throughout his childhood and teen years, he recounted it as a kidnapping, the story becoming more elaborate as the years went by. Nobody believed him.

“So much time has passed, I don’t even know if I just made that story up. I have all these vivid memories of this thing. I could trace it back to a place. But I don’t know if I actually saw anything, which made it more interesting for me to write about it and craft a whole story about a pathological liar.”

“Albert pitched it to me as Chinatown in Niagara Falls,” says Middleton, who plays the liar.

Her Abby returns to Niagara after a long and mysterious absence to deal with her family’s dilapidated motel. She investigates that rekindled kidnapping memory, which may be connected to a shady land developer, circus performers and a podcaster, played by filmmaker David Cronenberg, who shares paranoid conspiracy theories about Niagara’s history. If Clifton Hill is Shin’s Chinatown, the iconic genre director is here to cast a John Huston-sized shadow over it.

Middleton goes on to praise both Shin and Schultz for writing women in a way that doesn’t devolve into typical male-isms.

“It’s a story about obsession,” she says. “It not about a woman chasing a man, or a woman trying to do something to impress a man, or for a man, or because of a man. And there’s no point where there’s just a scene where she’s inexplicably walking around in a bra. That’s one of those things you find written into a script and you’re like, ‘Wait! What?’” 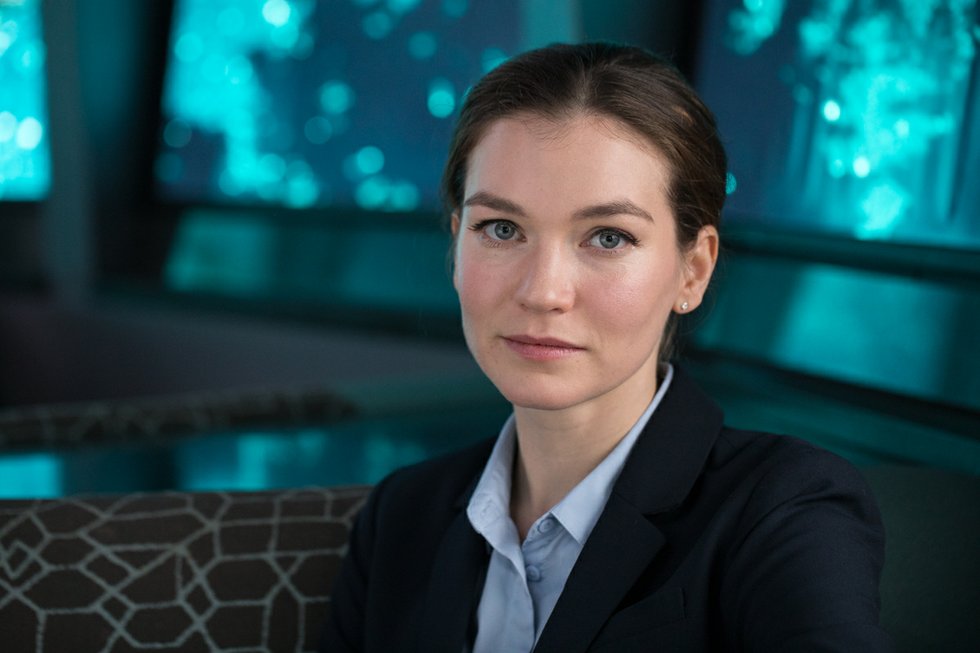 Hannah Gross on the set of Albert Shin’s Clifton Hill

“It is not a superficial reaction to this current shift happening in film and television,” adds Gross about the script. (The first draft was finished in early 2016.) “You see people pushing for the ‘strong female lead’ but it’s without substance. It is still another version of some male’s fantasy of what a strong female is. Albert and James just wrote about people.”

Gross also describes how they imagined Niagara Falls as “heightened and elevated” with a loose and weird energy.

It’s a cliché, but Niagara Falls really is a character in the movie, a place as contradictory and ambiguous as the pathological liar Middleton portrays.

The British actor is enjoying the Falls for the first time. Her hotel room overlooks the natural wonder. She enjoys the sight every morning but has been especially observant about the lifestyle in town during low season, when the Falls are turned down, the gamblers remain and the people in the hollowed-out karaoke bars sing like they’re looking for release from small-town life.

“There’s almost a sadness about it,” says Middleton. “It feels eerie walking around a town that is supposed to be full of people with lots of bright lights flashing.”

The Clifton Hill BIA doesn’t want to admit there’s a low season, but it’s that period between November and March when most tourists leave and the place takes on a life of its own that Shin finds more interesting.

“I wanted to make Niagara Falls as cool, interesting and mysterious as I remember it growing up,” says Shin. “It’s a tourist town. But also a border town. There’s this incredible natural wonder. But around it they built this other thing. Come for the Falls, stay for the cotton candy. Niagara Falls has always had this mentality.”

As an example of Niagara’s baroque sideshow attractions, Shin recounts an event from 1827. Hotel owners attempted to lure tourists by buying a dilapidated “pirate ship,” filling it with animals like Noah’s Ark and sending it over the Falls. They advertised panthers, wild cats and wolves. They ended up with buffalo, raccoons, dogs, geese and two small bears. The bears jumped ship and swam to Goat Island, able to swim free because no one would dare tie them down to the boat. Most other animals perished when the boat crashed at the bottom.

There are approximately 25 suicides at Niagara Falls per year, and connections to the Mafia and the Hells Angels. Then there’s Sir Harry Oakes, whose name is still all over Niagara. In 1943, he was found murdered, covered in petrol and feathers in the Bahamas, which is where he was protecting his fortune from Canadian taxes.

All that history adds shading to Shin’s movie, which is about the contrast between Clifton Hill’s neon lights, the Falls’ breathtaking beauty and dark currents surging below. It’s a contrast Middleton feels when she looks out from her hotel room.

“If you stand with your back to the town and look at this incredible waterfall,” she says, “it’s amazing to think there is all this stuff going on behind you: this massive amount of tourism, the casinos, the money. I’m sure there’s a lot of stuff going on behind the scenes that we don’t know about.”