Danis Goulet's Indigenous-themed thriller is as good as you've heard, and Indian satire Dug Dug could be the festival's first breakout 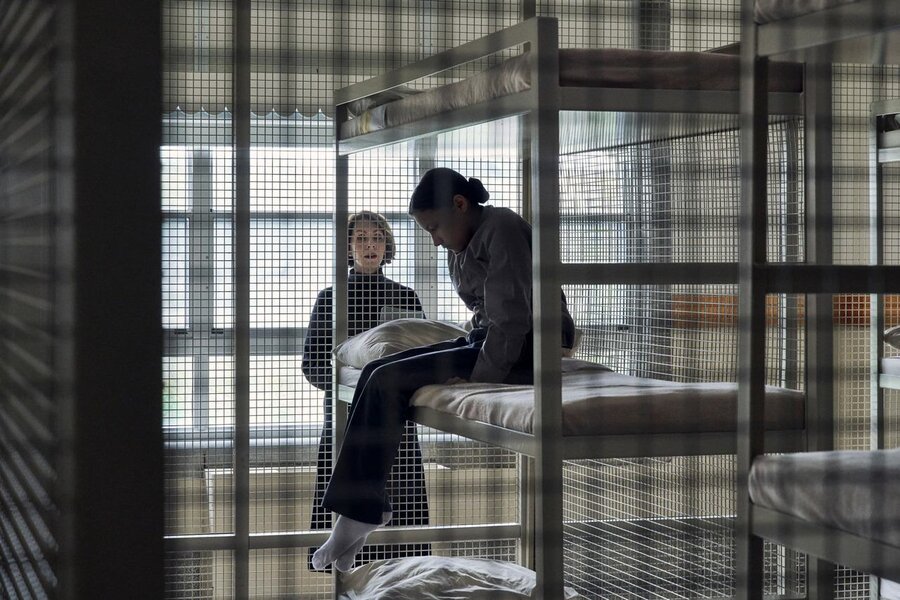 So things are a little wobbly this year. TIFF’s digital screening platform glitched hard yesterday, locking press and industry out of most of the titles that were supposed to be available, including Hellbound, a Primetime entry from Train To Busan creator Yeon Sang-ho that I was quite looking forward to seeing. The festival promises we’ll be able to watch it today, and I hope that bears out.

Set about a quarter-century in the future, in a Canada under military occupation from a nation identified only as “the southern state,” it’s a dystopian thriller told through an existing Indigenous lens. In a militarized border city, a Cree woman named Niska (Elle-Máijá Tailfeathers, of The Body Remembers When The World Broke Open) races to rescue her daughter Waseese (Brooklyn Letexier-Hart) from a draconian State Academy, before the girl can be fully remade into an obedient servant of the occupying force.

Any resemblance to Canadian history is entirely intentional, but Goulet doesn’t stop there, fixing her residential-school allegory in an efficient and entirely convincing dystopia that might as well be happening right now. I won’t be the only critic to make comparisons to Alfonso Cuarón’s brilliant Children Of Men, but that’s because the comparison stands: Goulet is working with a similar grimy, functional aesthetic, though she uses it for her own ends, and Tailfeathers’s Niska has the same reluctant-hero energy as Clive Owen’s Theo, quietly furious that the world won’t just let her be miserable in peace, but willing to do whatever it takes to secure a future for those coming up after her.

But all that said, Night Raiders isn’t just an echo of Cuarón’s masterwork; it’s very much its own thing, folding Canada’s past and possible future together to create a film that feels utterly of the moment. It’s a hell of a debut, and I am very, very excited to see how Goulet follows it.

But I did manage to watch Ritwik Pareek’s Dug Dug (Rating: NNN) last night, in advance of its festival premiere this afternoon (4 pm, Ontario Place Cinesphere). From one point of view, it’s a superficial satire of religious mania, chronicling the rise of a new religious movement after a fatal road accident leaves people convinced the victim was some sort of saint; Pareek makes his points about unquestioning belief and the social structures that encourage it with a pretty heavy hand, with repetitive imagery and one-dimensional characters. But on the other hand, it’s a lot of fun to watch, with Aditya S. Kumar’s widescreen cinematography capturing the increasing mania on a grand scale, propelled by Salvage Audio Collective’s relentlessly peppy score, and Ranjit Singh’s cotton-candy-influenced production design giving the whole thing the feel of a party that never ends. It’ll be positively overwhelming on the gargantuan Cinesphere screen, and if any movie has a chance of sending audiences back into the world on a giddy high, it’s this one. (It’ll also be available digitally tomorrow at 3 pm, if you want a more scaled-down experience.)

The movie version of author Catherine Hernandez’s Scarborough landed distribution ahead of its TIFF premiere.

The first deal of the festival was announced early Thursday afternoon, as AMC and RLJE Films announced the North American acquisition of Camille Griffin’s gala presentation Silent Night a full week ahead of its world premiere September 16. (We don’t know how much it sold for, and honestly who cares about that stuff anyway.) AMC plans to release the film in theatres and on its AMC+ streaming service this holiday season, which makes sense because the movie – which stars Keira Knightley, Matthew Goode, Lucy Punch, Kirby Howell-Baptiste and Jojo Rabbit’s Roman Griffin Davis – is a heartwarming tale of friends and family gathering at a country house for one last Christmas together… before an ecological disaster wipes out all life on Earth. God bless us, everyone.

Somewhat more sensible is this morning’s announcement that Canadian distributor LevelFilm had picked up the Canadian rights to Scarborough, just hours before Shasha Nakhai and Rich Williamson’s feature – adapted by Catherine Hernandez from her own novel – makes its world premiere this afternoon. Rad wrote about it at length for this week’s cover story, and it’s good to hear its future is secured. Tickets might still be available for the in-person screening this afternoon (4 pm, TIFF Bell Lightbox 2), and for the digital screening tonight at 9 pm. But if you miss it this week, it’s good to know you’ll have another chance to catch it.

There’s a lot of star power coming to the festival tomorrow, as Denis Villeneuve’s Dune descends upon the Ontario Place Cinesphere, Dionne Warwick graces the Princess of Wales theatre with the documentary Don’t Make Me Over, Coriolanus co-stars Jessica Chastain and Ralph Fiennes reunite after a decade in John Michael McDonagh’s The Forgiven and Jake Gyllenhaal anchors Antoine Fuqua’s remake of The Guilty.