Top of the TIFFS

Our annual review of festival boldface and buzz 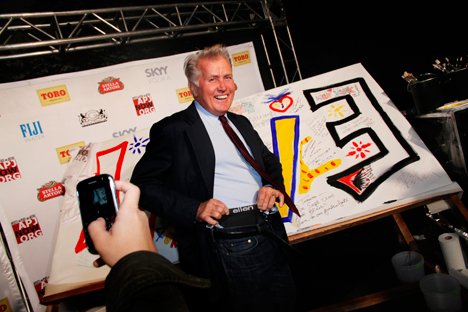 The end is near and the TIFF party people would be happy about it if they weren’t all half asleep.

Talk before this year’s film festival was all about how the scene was going to be bigger than ever and boy was it. Divide blame for that boom between the Bell Lightbox launch, some post-recession sponsor dollar rebounding and the fest’s natural momentum, attracting more celebs and buzz year-over-year.

But before we say farewell to another fest, draw the drapes and pass out until Monday, here are the parties, the people and the scenes that made this TIFF.

The 2010 award for film festival ubiquity goes to…Lennox Lewis. Starting with the official opening night party at the Liberty Grand, the retired boxer spent the week bouncing between red carpets and after parties. Watch out Dwayne Johnson AKA The Rock. Lewis now has friends in high Hollywood places.

Who needs a Cadillac-sponsored SUV when…You’ve got a golf cart. If TIFF partygoers looked like they were having more trouble than usual putting one foot in front of the other this year, blame being chauffeured in golf carts up to parking lot rooftops for more than a few festival events. The best ride was at Absolute’s party last Thursday because the driver was game to gun it as we went around and around and around.

Who needs to eavesdrop on celebrities when…They give you so much quotable gold while MCing their TIFF fundraiser. Artists for Peace and Justice board members Paul Haggis, Maria Bello, James Franco and AnnaLynne McCord all used their five minutes on the mic to swear like sailors and share touching anecdotes about the organization’s relief efforts in Haiti.

I see London, I see France, I see…Martin Sheen’s underpants. On the red carpet outside the APJ do, the actor raised $1000 by showing off his Ellen Show-gifted briefs. Oh, and speaking of underwear, if you find the pair I left at the Bang Bang Club party on the Bridle Path Wednesday night, please return them to NOW reception.

Peaches Geldof was great and all…But what really stood out at Ubisoft’s loft party Sunday night were the bow ties and nerdy specs worn by the bar staff. An honourable good service mention to the Soho House team flown in from L.A. Can’t you stay?

Tweeting gossip feels extra trashy if…Your tweets file in above fundraising calls from philanthropically minded TIFF publicist Natasha Koifman. For every new follower collected during the first week of the festival, she donated $5 to rebuild schools in Haiti (903 new friends added up to $4515).