Initially offered a supporting role in season three of HBO's crime drama, the Oscar winner pitched himself as the lead – and the results are both seismic and subtle 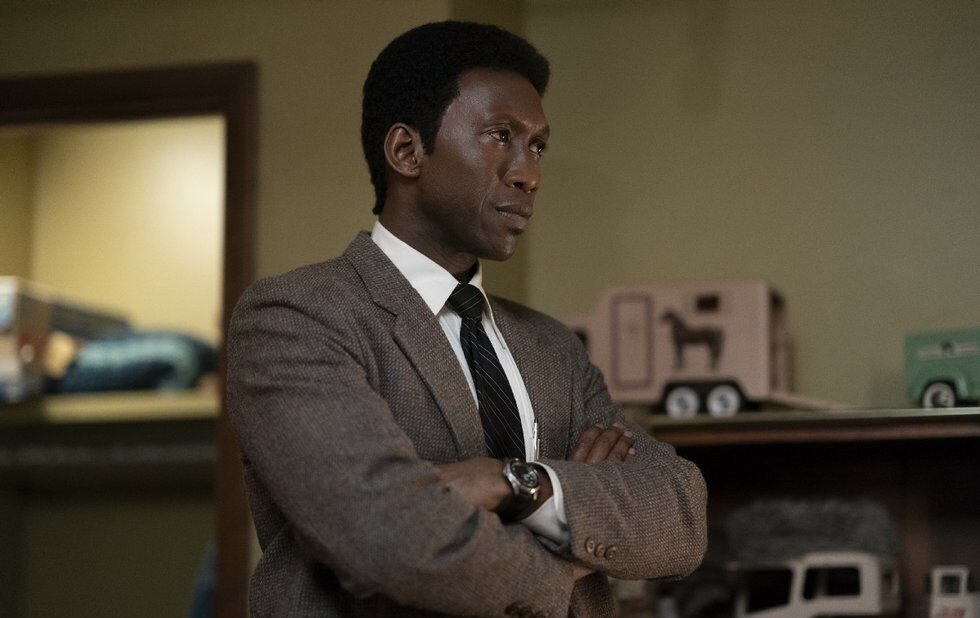 After toiling in the industry in bit and supporting parts for almost two decades, appearing in shows like House Of Cards and movies like The Hunger Games, Ali carries the third season of HBO’s crime drama True Detective as Wayne Hays, a detective working a missing-person case while sorting out personal trauma in a narrative spanning more than three decades.

The thing is, Ali wasn’t even offered the lead role at first.

Wayne was supposed to be white. Ali was approached to play the supporting role, Wayne’s partner Roland West (played by Stephen Dorff).

“I know what I had been offered to play and what opportunity that they set in front of me,” says Ali, recalling the original scripts. “I found myself really responding to Wayne and his journey.”

Hot off his Best Supporting Actor Oscar win for Moonlight, the actor flipped the offer and presented True Detective creator Nic Pizzolatto with a “what if?” scenario. It stuck.

“The script was in a great place,” says Ali. “I felt like it would be more interesting to see a [Black] lead detective in 1980 navigating the South, trying to solve this crime while up against a homogenous community. He already stands out just as a lay person. But now he’s a police officer in this community.”

This isn’t the first time Ali fought to carve out a bigger space for himself. We’re at the Four Seasons in Beverly Hills, in a round-table interview with Ali who is looking fly as hell in a light grey plaid suit. He’s discussing how the buzz around Moonlight finally shed light on all the work he had done before. Since Oscar made him a bankable commodity, he’s fielding plenty more offers.

“But more isn’t necessarily more,” cautions Ali, explaining the roles he is offered don’t often present an opportunity to grow as an actor.

He’s currently back in the Oscar conversation for his role as real-life concert pianist Dr. Don Shirley in director Peter Farrelly’s civil-rights-era buddy comedy Green Book. Even in that role, Ali had to push back against the story’s white saviour trappings, where a Black man’s incredible journey through the racist South is framed within the story of the white chauffeur who learned to love Black people along the way.

“He didn’t really have any time,” says Ali speaking about his character’s scope in Green Book’s original script. Perhaps that’s because the film was co-written by Nick Vallelonga, who made his father Tony the film’s subject.

Ali worked with Farrelly to lift the Shirley character up, from white man’s foil to empowered individual in his own right. “I tried to expand and deepen, in some capacity, the blind spots that I saw or the things I felt fell short.”

Green Book essentially became a two-hander, with Ali as a co-lead. But that hasn’t prevented his performance from being categorized as a supporting role this awards season (more on that later).

As for True Detective, taking over the lead role and making Wayne an African-American meant a seismic shift in perspective and feeling, if not in the actual plot and script.

Wayne’s racial shift meant the differences were more in small details than on the page. As he prowls a small Southern town, diligently trying to find two missing white children, his “hick radar” stays alert to both the ways people speak to him and how they see him – or don’t.

“I didn’t feel like there needed to be n-words flying around,” says Ali. “[The racial disparity] could be easily addressed in subtle things, like a character being directed not to look at me when I ask a question but instead look at my partner Roland, viewing him naturally as the authority figure.”

The difference is also deeply felt in the relationship between Wayne and his wife Amelia (Carmen Ejogo), which sneakily becomes central to the narrative.

“The whole show is about them really,” says Ejogo in a separate interview. She took on the role based on scripts for just a few episodes, where the character seemed like an improved take on just another stock wife part. Finding out in later episodes how key Amelia actually is to the story was a gratifying surprise, one that makes Ejogo teary-eyed in recalling it. “It’s about redemption and love and time and memory – much bigger things than a crime story.”

What shook me was simply the intimacy between the two characters, and the powerhouse performances behind them. Wayne and Amelia flirt, fight, grow distant and fuck. And as they continue testing each other’s limits and work on their groove, it struck me how rarely TV viewers really get right in between a Black couple on screen.

“This is a regular, mundane and authentic relationship being played out,” says Ejogo. “It’s not only about race.

“I’ve been in a Black relationship. I’ve been married. It’s not like every day the beats are loaded with cultural references,” she continues. “It’s just regular stuff you deal with and it’s surprising how little of that has made it to the screen. There’s so much value in being allowed to enjoy a relationship between two people of colour that just looks like a relationship.”

“In this format, it really feels refreshing to me,” says Ali. “To see them process their relationship, in a way that feels at times wordy and intellectual but at the root of it really animal and human, is like a new thing.”

The affection between Wayne and Amelia is the most compelling thread in the new True Detective, but I warily wonder how well it will be embraced by the public. The reason for my cynicism has everything to do with awards season.

Ali’s Moonlight director Barry Jenkins made another ravishing story about Black love in If Beale Street Could Talk, which, in my mind, is the year’s best American film. But so far, Beale Street has gotten a cold shoulder. The movie gets nominated mostly for Regina King’s supporting performance, but it has failed to win best picture at critics’ awards and was completely shut out at the SAG nominations. Jenkins failed to pick up a directing nod at the Golden Globes.

If Beale Street’s awards season momentum is sputtering, I can’t help but suspect that’s because the film’s intimate look at two Black people, whose love for each other is its own resilience, doesn’t offer a surrogate for a white perspective – the dominant perspective among critics and awards voters.

At the True Detective junket in Los Angeles, every journalist I speak to (Golden Globe voters among them) shrugs at Beale Street. Some never bothered to see it. But they’re all eager to tell me how much they love Green Book. This is not a surprise since Green Book’s white saviour framework is designed to give wide audiences a comforting position to relate to.

When I bring up my irritation to Ejogo, she looks as though her blood is beginning to boil before giving me a head shake that says, “Not today, Satan.” She doesn’t see the merit in awards season. Nor does Ali even if he stands to gain from it again this year.

This conversation puts Ali in a tricky position. He chooses his words thoughtfully and carefully. He can’t slag Green Book, but acknowledges the criticism of the film’s outdated tropes.

According to Don Shirley’s family members, Ali called them to apologize for any offense when they called out the inaccuracies in the film, which was made without their consultation. As far as we know, Ali is the only member among the film’s cast and crew to reach out.

But he sees value in Green Book.

“Every film – whether it’s a dramedy, whether it’s a cathartic experience like something Barry Jenkins is gonna do or whether it’s a documentary like Ava DuVernay just did a couple years ago on the justice system [13th] – all these offerings, I personally feel, make their contribution. They have their place, because they are real points of contact for us to have a conversation.

“But that doesn’t mean that they’re all prioritized the same,” Ali adds, acknowledging my frustrations. He’s an optimist who doesn’t worry about the awards season cold shoulder. This is small stuff and as Ali so confidently puts it, Jenkins is going to keep riding like Martin Scorsese and one day will be remembered as one of the greats.

“A decade from now, Barry’s going to be in Criterion.”