NOW MagazineMovies & TVNews & FeaturesAfter a decade of antiheroes, TV in 2018 was a buffet of moral desserts

After a decade of antiheroes, TV in 2018 was a buffet of moral desserts

The Good Place, Barry, BoJack Horseman and Better Call Saul are examining how hard it is to be a better person – and it's fascinating 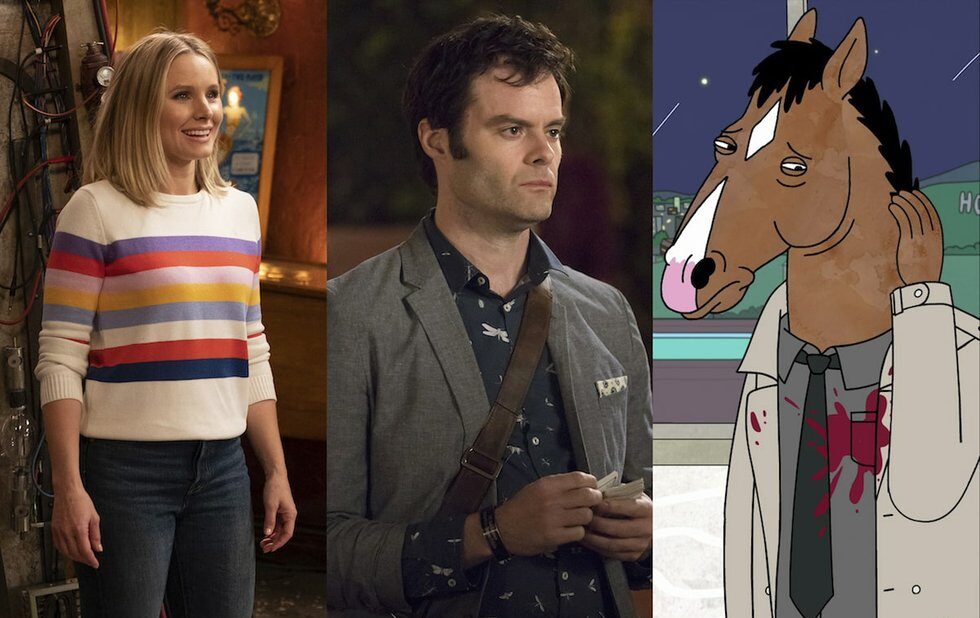 Not so long ago, television was all about antiheroes: your Tony Sopranos, your Vic Mackeys, your Dexter Morgans, your Dr. Houses, your Don Drapers, your Walter Whites.

Complicated men – and they were almost all men – who always had a good reason for the terrible things they did. Dexter only murdered bad people Vic protected his team Tony and Walt were providing for their respective families Draper and House were, uh, really good at their jobs, I guess?

Oh, and there was Patty Hewes on Damages – remember Damages? – who put that nice Ellen Parsons through hell to make her a better lawyer.

Antiheroes make for great television, because having a bad person at the centre of a show forces the viewer to identify with that character over time. You end up rooting for the villain without even realizing it – which makes the eventual reveal that they are, in fact, monsters so much more shattering when it comes. (And before anybody brings up The Americans, that show was pretty clear about the Jenningses being bad people from the jump.)

Eventually, though, we got used to it. The world embraced antiheroes a little too well, and people thought it was a good idea to put a reality television star in the White House. (Kevin Spacey was already there on House Of Cards, could Trump really be any worse?) And right around that time, Parks And Recreation and Brooklyn Nine-Nine co-creator Mike Schur launched The Good Place – a sitcom where we root for flawed people to be better, and so does the show.

The Good Place opens in the afterlife, where a young woman named Eleanor Shellstrop (Kristen Bell) learns that she has died, and made it to heaven on the strength of all her good deeds. But she knows something the angels don’t: those good deeds were performed by a different Eleanor Shellstrop, and this Eleanor is an Arizona dirtbag who spent her life looking out for herself and only herself, and burning other people before they could burn her.

Paired with the other Eleanor’s soulmate, Senegalese philosophy professor Chidi Anagonye (William Jackson Harper), Eleanor decides to make herself a better person in order to keep her spot in the Good Place… and it sort of works. Even after a series of plot twists that upend most of the things we know about the show – and a loop-de-loop at the end of the second season that effectively resets the characters to their pre-death selves, Eleanor does become a person worthy of the Good Place.

And it doesn’t matter.

As the current season is exploring (through a whole bunch of ridiculous situations, including an Australian study group and an art gallery installation that’s basically an omelette bar), self-improvement doesn’t really count if it’s carried out for selfish purposes. If you’re actively trying to avoid hell through selfless acts, are any of those acts truly selfless? It all comes down to the idea of “moral dessert” – behaving in a moral fashion with the expectation of a reward down the line – and it’s just not the way one gets into the Good Place.

I should point out here that Moral Dessert is a term that the show made up, based on someone’s misunderstanding of the phrase “moral desert,” which refers to a state of deserving things rather than earning them. But it’s absolutely a thing, and it exists in a couple of other current shows.

Consider the heroes of Barry and BoJack Horseman. Both title characters are objectively awful people: Bill Hader’s Barry is a dead-eyed assassin who’s spent a decade or more murdering people for money and Will Arnett’s BoJack is a Hollywood has-been who uses sex, drugs and alcohol to distract himself from the abyss he carries around inside. (He’s also an anthropomorphic horse, but let’s not get into that just now.)

They’re antiheroes, but they don’t want to be: Barry wants to stop killing people and become an actor, and BoJack – who’s already an actor – just wants to be happy. They want to be better people. And they are, for a little while, doing the things a good person would do – right up until they slide back into their old habits. They’re each chasing their own moral dessert, and when it doesn’t arrive quickly enough, they flip the table and walk away.

Better Call Saul, Vince Gilligan and Peter Gould’s brilliant Breaking Bad prequel, toys with the same idea from a different angle: what if a man had perfect moral understanding from one moment to the next, and chose to do wrong instead of right?

Bob Odenkirk’s Jimmy McGill is so likeable that we spent four whole seasons ignoring the broken moral compass that was right in front of us: sure, the guy’s first instinct is always to take the easy way out, but he does the work when he has to! He lies to everybody, but not to his girlfriend! He helped those seniors in that class action suit! He’s got a good heart! His brother Chuck is the real monster, isn’t he? Why, he probably adopts the Saul Goodman persona we know from Breaking Bad because he’s up against a wall!

And then this season’s finale brought the hammer down, showing us the real Jimmy: a grinning ghoul who’ll do whatever it takes to make the most of an opportunity, no matter whose trust he betrays and what ethical lines he has to cross. Odenkirk sold it so well that we didn’t even see it happening. That’s the ingenious reversal Better Call Saul plays on Breaking Bad: where “Heisenberg” was a criminal persona Walter White invented to give himself some cover, Jimmy McGill was the mask all along.

This revelation makes the show’s remaining seasons much more interesting: how will they play out? Can we still root for Saul to be a better person when we know he’s not going to be?

The next seasons of Barry and BoJack Horseman must grapple with the same questions meanwhile, The Good Place is chasing a different line of moral inquiry every Thursday night. Since the knowledge of The Good Place and its points system means our heroes can’t earn a place there – moral dessert, remember? – they decide to help other people get in, forming a “soul squad” to redeem the lives of their friends and families where they can.

Schur blew that up a week ago (seriously, this show will burn through an entire season’s worth of plot in two or three episodes), but it’s an idea as pure as they come. To quote another great TV show: if nothing we do matters, then all that matters is what we do.

And for an American sitcom to lay things out that way in the age of Trump – hell, on the network that aired The Apprentice in the first place – it almost feels like penance. Or grace, if you believe in that sort of thing.