“Jumping off of a boat in the middle of the ocean and surviving on a beach – if you can’t pepper that in with some kind of reality, then it’s not a movie I want to see.” 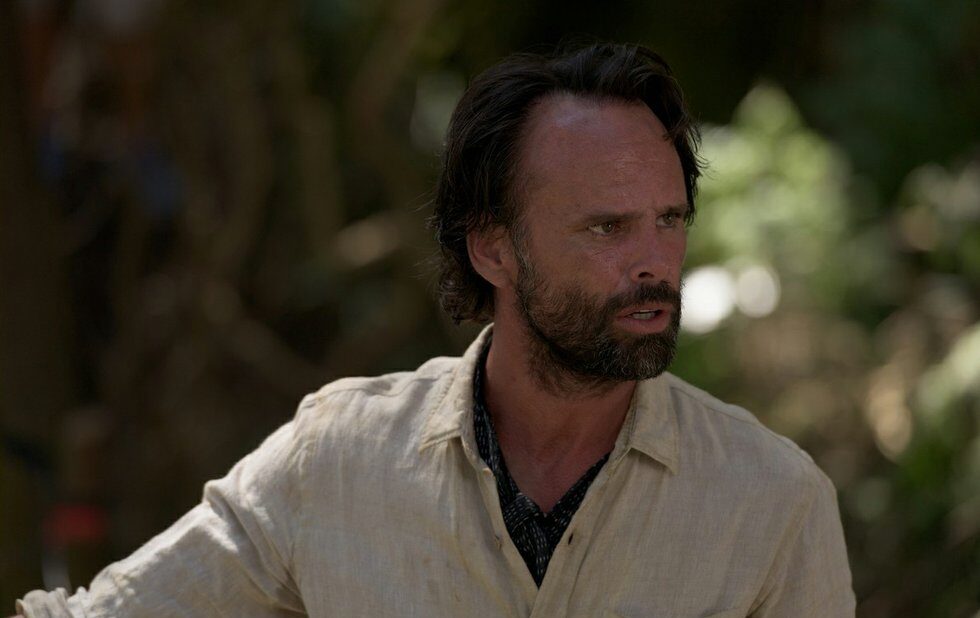 We’re right in the middle of a conversation about Tomb Raider, the great big reboot of video game hero Lara Croft, in which he plays sinister archaeologist Mathias Vogel, and the actor’s signature composure is shattered by a couple of quick, sharp sneezes.

Why am I telling you this? Because it’s delightful. Goggins has made a career out of playing cold-blooded customers – Shane Vendrell on The Shield, Boyd Crowder on Justified, The Hateful Eight’s suspicious sheriff – and it’s something he carries over into the interview setting. Until he sneezes and starts goofing around about superstition.

But the third sneeze never comes. “Aw, man,” he says, and we return to the conversation at hand. We’re talking about Vogel, and playing a villain, and how the best bad guys don’t think they’re bad guys.

“I don’t know that I’ve ever played a sadistic person,” he says when I suggest that Vogel – who’s been trying to find a hidden tomb on an isolated Japanese island for seven years when Alicia Vikander’s Lara finds him – is using his desire to get home to his family to justify some awfully sadistic measures.

“I don’t know that I’ve ever met a sadistic person,” he continues. “There are sadistic people out there for sure, but that isn’t the person I play. If you really meditate on what it was like the day that he left his family? Really think about that. What’s it like for you to walk out of your house thinking that you’re only going to be gone for a year, maybe, and cut to seven years later and you were kept away from the things you love the most in this world. What would you be like, really?”

It’s part of a larger attempt to reinvent Tomb Raider – a property known for a hero who spends most of her time jumping over things in a tank top – as a more realistic adventure movie.

“Jumping off of a boat in the middle of the ocean and surviving on a beach – if you can’t pepper that in with some kind of reality, then it’s not a movie I want to see,” he says, making a case for emotional investment in the characters.

“We just live in different times now people’s appetites for investing in their entertainment have changed. I hadn’t read a [script] that was made on this level, with this budget, that I could hold onto in a real human, emotional way for a long time.

Seeing Vogel as a reasonable villain – not unlike Indiana Jones’s nemesis Belloq in Raiders Of The Lost Ark – gave him another hook.

“The service of his goal is everything. And what was his goal? His goal was discovery, wasn’t it? Regardless of who he worked for. His goal was finding something that had eluded everyone else. And the competition with Indiana Jones, I just think that’s one of the best rivalries I’ve seen on film. I love that story and watched it many times preparing for this.”

Goggins will next be seen in this summer’s Ant-Man And The Wasp, but don’t worry about him getting locked into the blockbuster machine. He’s just finished Them That Follow, “this very small independent movie about a snake-handling Pentecostal community in Appalachia,” that reunites him with Justified’s Kaitlyn Dever.

“It’s a relationship between a father and his daughter,” he says. “I’m pretty excited about it. It’s a young team, Daniel Savage and Brittany Poulton. I like working with first-time directors – especially when they wrote a script that was this good.”