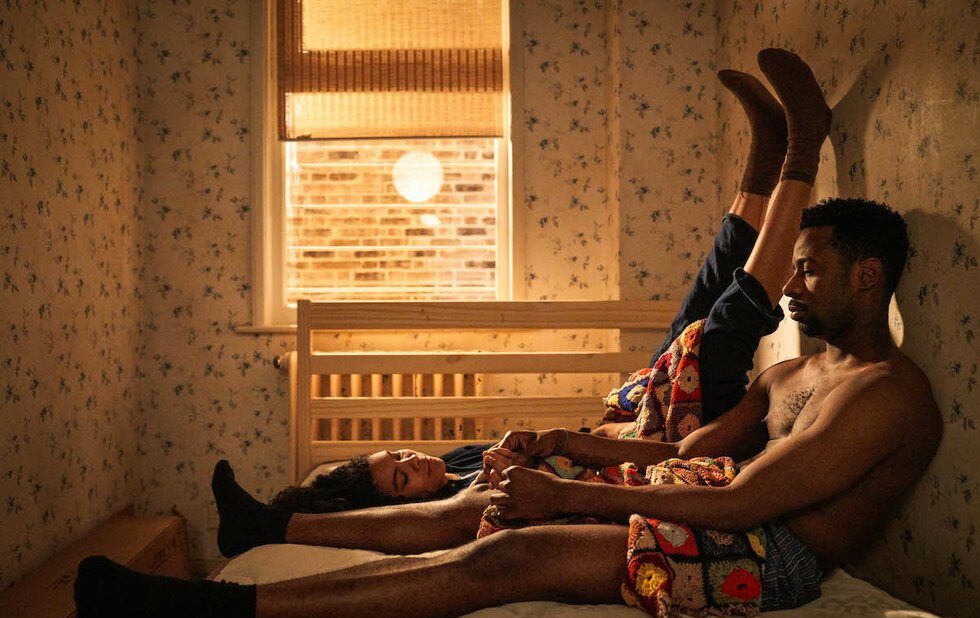 Trigonometry is a casual and charming take on polyamory.

Strapped for cash while renovating their business, London paramedic Kieran (Gary Carr) and Gemma (Thalissa Teixeira) rent a room to Ray (Ariane Labed), an Olympian swimmer forced to leave sports after a terrible injury. Kieran and Gemma hope the arrangement will buy them some breathing room so they can rebuild their strained relationship, but instead find themselves both drawn to the new woman in their home. And the feeling is mutual. Produced for the BBC, Trigonometry is a charming, casual take on polyamory, with the trio’s mutual attraction immediate and unquestioned. But writer/producers Macmillan and Woods don’t just settle for sex they’re interested in examining what happens to a couple’s intimacy when it expands to include another partner. The show is also very funny, with all three leads getting to show subtle comic chops, and it’s also just a pleasure to watch. (The first five episodes are helmed by Athina Rachel Tsangari, who directed Labed in Attenberg and co-starred with her in Alps.) If you’re not ready for Pride Month to end, this is a fine way to keep it going a little longer. All eight episodes streaming on CBC Gem Friday, July 3. NNNN (Norman Wilner)

Year Of The Rabbit

London’s East End, 1887: In a world seething with ignorance, corruption and poverty, Detective Inspector Rabbit (Matt Berry) stands for justice… with the slight complication of also being a violent idiot in constant need of assistance from Wilbur Strauss (Freddie Fox), a wide-eyed rookie, and Mabel Wisbech (Susan Wokoma), who’s determined to be England’s first female copper. If you’ve enjoyed Berry as the debauched vampire Lazlo in the What We Do In The Shadows TV series, you’ll find him doubling down on that character’s tendency towards bellowing overconfidence – which is never not funny – and writers Andy Riley and Kevin Cecil have a fine old time taking the piss out of the classist, patriarchal foundations of the British crime procedural. Throw in Keeley Hawes as the leader of a secret society and Ripper Street’s David Dawson as a camp version of real-life historical figure Joseph Merrick (aka the Elephant Man) and you’ve got a fine summertime diversion. All six episodes now streaming on Topic. NNNN (NW)

It may be a couple of weeks since Juneteenth (June 19), a day that commemorates the end of slavery in the U.S., but the meaning behind the occasion remains powerful. Queen Sugar writer/director Peoples’s film follows Turquoise (the perennially underrated Nicole Beharie), as a single mom struggling to balance it all. A former beauty queen, her life didn’t turn out quite as winning the crown promised it would, and so she encourages her daughter Kai (Alexis Chikaeze) to follow in her footsteps and become the next Miss Juneteenth – whether she wants to or not. All the while she’s battling over her love for Kai’s father Ronnie (Kendrick Sampson, as endearing as he is on Insecure), who she’s long been separated from. It’s ultimately a story about community, but Miss Juneteenth also offers a slice of the Black experience in America for a woman and a mother. At just over 90 minutes, it’s a sweet reminder that there is freedom in living the life you want and that it’s never too late to find it. Corny, sure, but beautifully uplifting for an audience that rarely gets such treatment at the movies. 99 minutes. Now streaming on iTunes. NNNN (Sadaf Ahsan) 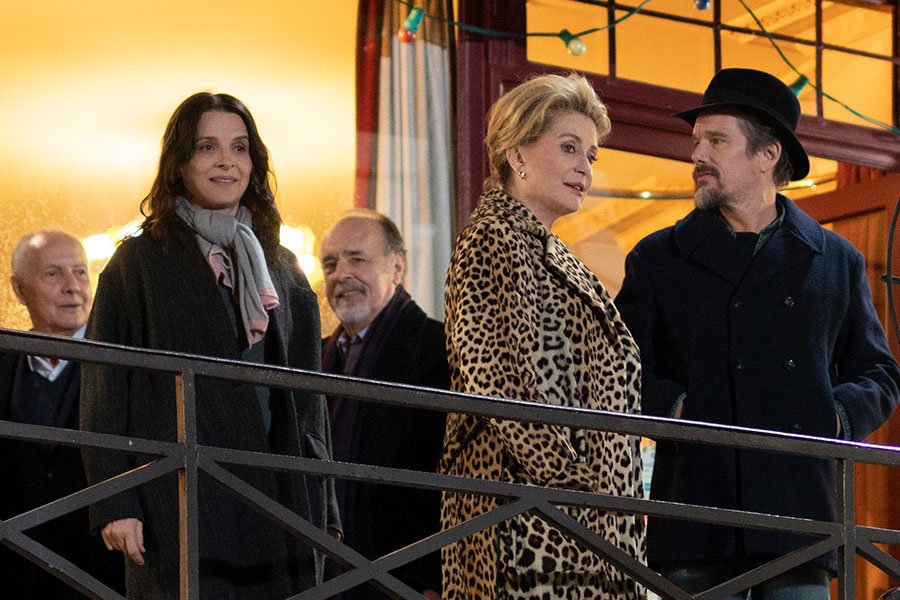 Kore-eda’s first movie shot outside of Japan will be a big draw among fans excited to see two of France’s most recognizable acting talents on screen together as mother and daughter. When we meet French screen icon Fabienne (Catherine Deneuve), she’s shadily rebuffing an interviewer’s obsequious questions with bitter self-deprecation. She has just published a memoir full of omissions and inaccuracies – at least according to her estranged screenwriter daughter Lumir (Juliette Binoche), who returns home with her C-list American actor husband (Ethan Hawke) and bilingual daughter to celebrate the publication.

When Fabienne’s assistant quits, Lumir fills in and follows her mom to the set of a reverse-aging sci-fi movie, where Fabienne struggles to play opposite a younger actor whom the press compares to one of Fabienne’s late acting rivals. It’s the most obvious of the many unsubtle meta-narratives swirling through the central relationship. Blandly shot in a way that emphasizes little more than the bougie Paris setting, The Truth is frequently rescued by the lived-in rapport between its formidable leads, who must fend off Kore-ada’s attempts at steering The Truth toward cloying sentimentality. Deneuve is adept at finding the comedy in her unapologetic character’s situation and we get many priceless reaction shots. Binoche, as the daughter who is resentful of her mom’s choice of career over family, gets the more subtle role. Hawke is just along for the ride. Ultimately, this is an insider-y movie about movies, memory and truth in art that doesn’t quite transcend its Rich People Problems trappings. 106 minutes. Available on VOD on Friday, July 3. NNN (Kevin Ritchie)

Spun out of Ben Dunn’s long-running comic book series Warrior Nun Areala but telling an entirely new story, Netflix’s latest supernatural action series has a certain kinship with Buffy The Vampire Slayer and Wynonna Earp, other shows built around young women drawn unwillingly into an endless battle between good and evil. Here it’s Ava (Portuguese actor Alba Baptista, occupying the midpoint between Ellen Page and Alicia Vikander), a teenage orphan in Rome who winds up the bearer of a holy relic that lets her see demons, heal from any injury and lead an ancient Roman Catholic order that saves the world a lot. Showrunner Barry, who created Continuum and worked on Ghost Wars and Bad Blood, takes his time telling the story, and the first four or five episodes struggle to find a consistent tone while juggling a fairly large ensemble in multiple locations. (The fact that just a handful of the cast are native English speakers is another hurdle.) But once the first of several clever plot twists drops, the show pulls itself together and starts sprinting into a really fun final act, with Toya Turner’s wry Shotgun Mary emerging as the series MVP. Give Warrior Nun a chance it’ll grow on you. All 10 episodes streaming on Netflix Friday, July 3. NNN (NW)

Parker Posey is more than enough reason to see just about any movie she graces with her audacious presence, but Party Girl should be at the top of the list. The 1995 rom-com was the first feature film to premiere on the internet, and feels very much of its time in the best possible way. As Mary, Posey plays a librarian by day (horn-rimmed glasses, bun and all), and New York City party girl by night, who tries to reconcile her thirst for the wilder side of life with a need to take it easier on her liver and bank account, while falling for a hot falafel vendor named Mustafa (Omar Townsend) who, yes, she does eventually hook up with in the stacks. A charming cast that includes Guillermo Diaz and Anthony DeSando, it’s all a bit of a mess, really. But as a gritty and more believable Holly Golightly, there’s something so covetable about Mary’s energy and free spirit as she marches through Manhattan in one of the most underrated wardrobes of the 90s. I wanted it all back then, and I still want it now.  94 minutes. Now streaming on Kanopy. NNNN (SA)

Ella Fitzgerald: Just One Of Those Things

For They Know Not What They Do

We Bare Bears: The Movie