What to watch on Netflix Canada in May 2019 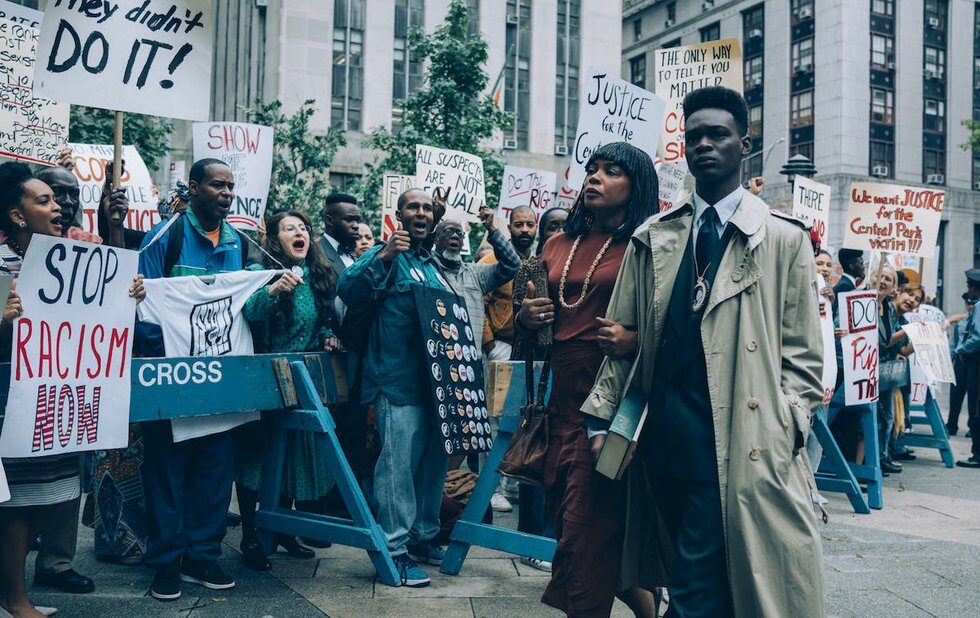 In May 1989, Donald Trump bought a full-page ad in the Daily Mail demanding the death penalty for the Central Park Five, five Black schoolboys charged in the Central Park jogger rape case. They were convicted and sent to prison, the oldest among them incarcerated for 30 years before they were proven innocent. Ken Burns already made a thorough and incendiary doc on the incriminating miscarriage of justice. Now, on the 30th anniversary of the incident, Selma filmmaker Ava DuVernay is offering her own take with the dramatized four-part series that should be necessary viewing – especially with Trump in office. May 31

The second season of indie filmmaker Joe Swanberg’s Chicago-set anthology series about sex and relationships was one of our favourite TV shows of 2017 so we have high hopes for the third and final season. There isn’t much info about what to expect, but we know Dave Franco, Jane Adams, Zazie Beetz, Gugu Mbatha-Raw, Marc Maron and Aya Cash are among those returning, joined by new cast members Sophia Bush and Swanberg regular Melanie Lynskey. May might be packed with high-profile Netflix releases, but don’t sleep on this one. May 10

Lisa Hanawalt, who designed the all-too-human talking-animal characters of BoJack Horseman, launches her own animated series about a pair of 30-year-old bird women – voiced by Tiffany Haddish and Ali Wong – looking for happiness and fulfillment in the modern world. BoJack creator Raphael Bob-Waksberg is on board as an executive producer, but don’t expect quite the same level of darkness Tuca & Bertie looks to be more of a straight comedy, with a supporting cast that includes Nicole Byer, Richard E. Grant, Tig Notaro, Tessa Thompson, Reggie Watts and Steven Yeun. Bring it, bird people. May 3

Can grieving be funny? Comedian-turned-producer Liz Feldman’s Dead To Me stars Christina Applegate as a cynical realtor who joins a grief support group after her husband is killed in a car accident. She meets a free-spirit type (Linda Cardellini) and they become fast friends. But don’t expect feel-good chick-flick vibes or a straight-up buddy comedy. The trailer suggests there are plenty of dark twists and reversals, taking the show into thriller territory. Clearly designed for maximum binge-ability. May 3

Netflix is doubling down on its Ted Bundy content this year. You’ve likely already binged Conversations With A Killer: The Ted Bundy Tapes, which chronicled the serial killer’s life over four one-hour episodes. Based on the popularity of that series, Netflix picked up Extremely Wicked, Shockingly Evil And Vile after its premiere at Sundance in January. This dramatized version, coincidentally made by the same director, Joe Berlinger, stars Zac Efron as Bundy and Lily Collins as Bundy’s girlfriend, Elizabeth Kloepfer. Like the series, the film has already gotten flack for mythologizing Bundy and his heinous actions, but Efron’s performance has been widely praised. May 3

Will this women-led comedy be cheesy as hell? Absolutely. But will you watch it anyway and laugh because Amy Poehler and Tina Fey are comedic gems? Duh. Wine Country follows six friends spending a weekend in California’s vineyards to celebrate a 50th birthday. Think Sideways, but with lots of Merlot. Produced and directed by Poehler, it stars Maya Rudolph, Rachel Dratch, Ana Gasteyer, Paula Pell, Emily Spivey, Jason Schwartzman and Fey. Gather your friends, open a bottle of wine and call it a movie night. May 10

Always Be My Maybe

Is Ali Wong the hardest-working woman in comedy? Possibly. The stand-up returns to Netflix as the star of this rom-com about two childhood friends who fall in love as adults. Randall Park, best known for his role on Fresh Off The Boat, also stars in director Nahnatchka Khan’s directorial debut. We bet you can’t say the title of the movie without hearing Mariah Carey. May 31

She’s Gotta Have It (season 2)

Our writers were divided over season one of Spike Lee’s TV reboot of his 1986 debut feature. DeWanda Rise stars as “sex-positive, polyamorous, pansexual” artist Nola Darling, whose newfound success forces her to decide “if she will remain true to her creative ideals or give in to the corporate world,” according to Netflix. This season sees Nola and her friends expanding beyond their tight-knit Fort Greene neighbourhood in Brooklyn. May 24

The exceptionally manicured and ultimately unrevealing marketing for What/If channels Sharon Stone in Paul Verhoeven’s trashy and brilliant Basic Instinct and Demi Moore in the guilty pleasure Indecent Proposal. Those inspirations have us all in, even if we have no clue what this anthology series starring Renée Zellweger is about. The synopsis says something about a “ripple effect” and the teaser trailer seems to be set at what looks like a swingers party styled by Estée Lauder. This might be that special kind of terrible. May 24

There are a lot of comics-derived shows on The CW, but none as flat-out odd as this very free adaptation of the Vertigo horror series, reworked by Veronica Mars creator Rob Thomas into a mystery procedural about an undead coroner (Rose McIver) who eats the brains of murder victims in order to access visions of their memories and help the Seattle PD find their killers. Yes, we know, that was a very long sentence – and it doesn’t begin to capture the show’s goofball spirit or do justice to McIver’s amazing versatility as Liv, whose habit of channeling the personality traits of the dead is its own magnificent running gag. New episodes of this final season will drop every Friday starting May 10, following their Thursday night airdate – and if you need to catch up, Netflix has the first four seasons ready to be binged. May 10

Now that roastmaster general Jeff Ross has made fun of nearly every possible living person worth making fun of, he’s hosting a new half-hour series that sends up figures from the past. Based on the popular L.A. club show, in which everyone from Shakespeare and Abe Lincoln to Michael Jackson have been roasted since 2014, the six-episode series will feature someone playing the famous figure, and comics – among them Bob Saget, Nikki Glaser, Gilbert Gottfried, Ryan Phillippe and Neal Brennan – dressed up in period-appropriate garb and reading to burn them. It’s sure to be funny – and you’ll probably learn a thing or two while you’re laughing. May 27 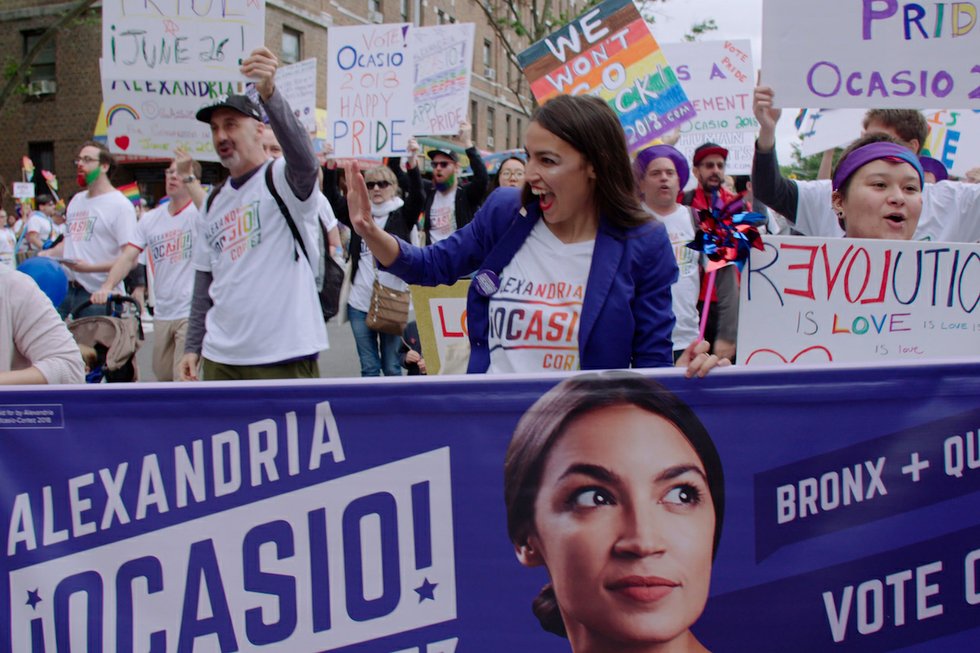 Alexandria Ocasio-Cortez emerges triumphant in Knock Down The House.

Rachel Lears’s fly-on-the-wall political documentary arrives on Netflix fresh from its Hot Docs play dates. Lears and producer Robin Blotnick followed four progressive women mounting primary challenges to unseat Democratic Congressmen in the year leading up to America’s 2018 mid-term elections. One of them was New York’s Alexandria Ocasio-Cortez, meaning Knock Down The House now plays as a record of her amazing, against-all-odds arrival as the standard-bearer of a new political generation. It’s also starting a theatrical run at the TIFF Bell Lightbox on May 6, if you want to see it with a crowd… and trust us, you do. May 1

Michael Schur and Dan Goor’s cop-shop comedy is one of the best network sitcoms going, and it hasn’t lost a step in the transition from Fox to NBC – though it did lose Chelsea Peretti, who exited the series midway through this year. Fortunately, the rest of the ensemble is strong enough to pick up any narrative slack created by her absence: Andy Samberg and Andre Braugher still have delightful anti-chemistry, Melissa Fumero, Terry Crews and Joe Lo Truglio have honed their compulsive weirdos to perfection, and Stephanie Beatriz remains the show’s MVP as the cagey, deadpan Rosa Diaz. Never seen it? Catch up! Like Schur’s earlier Parks And Recreation, it only gets funnier the more you get to know the characters. May 31

Jordan Peele’s Us is a big hit but also earned some whimpers for not being as brilliant as the filmmaker’s debut, Get Out. That’s a fair and unfortunate comparison. The earlier film about Black bodies being snatched was a cultural phenomenon, with its prickly, penetrating takes on racial tensions in the Post-Obama era. Get Out was both out-there and yet perfectly cohesive in the way it illustrated the horror Black people face while offering up humour as a coping mechanism to process trauma. May 1

You either know it or know of it from all the ways Alfred Hitchcock’s slasher classic has permeated culture. The master’s take on Norman Bates, his murderous mother and the poor woman who visits their motel is worth every obsessive re-watch – for its thrills, for the rules it broke (the first toilet onscreen, killing off its lead) and for confronting the male gaze in cinema long before we understood what that even was. Gus Van Sant’s 1998 remake and the 1983 sequel are also hitting Netflix this month. May 1

The latest Mission may not be the best (the original and Rogue Nation are the franchise peaks). But it certainly lives up to the seemingly impossible standards set by what has to be most breathlessly entertaining action franchise today. Tom Cruise refuses to age as he dangles from helicopters, leaps across buildings (busting up his leg in the process) and knocks around henchman alongside Henry Cavill. And the best way to appreciate all of this is if you listen to the PSA Tom Cruise and director Christopher McQuarrie issued for audiences. Turn off that dreadful motion smoothing on your HDTV. Streaming can blur these spectacular  action sequences enough. May 20

List of new titles available in May, by date:

A Tale Of Two Kitchens

One Night In Spring

She’s Gotta Have It (season 2)

How To Sell Drugs Online (Fast)

Diary Of A Wimpy Kid: The Long Haul

All In My Family

Merata: How Mum Decolonised The Screen

Rim Of The World

Disney’s The Nutcracker And The Four Realms

Always Be My Maybe

Scent Of A Woman