On the Toronto set of their mockumentary comedy series, Jemaine Clement and Taika Waititi talk through the ups and downs of being undead 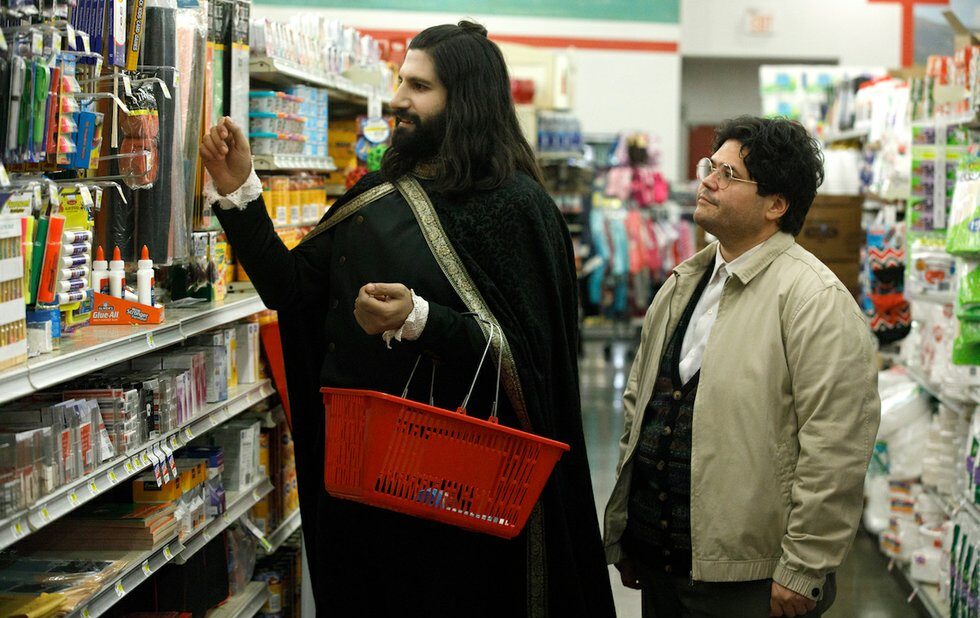 WHAT WE DO IN THE SHADOWS (Jemaine Clement). Premieres Wednesday (March 27) at 10 pm on FX, and streaming on ­fxnowcanada.ca.

In a boardroom in the massive Cinespace studio complex out at Kipling and the Queensway, Jemaine Clement is looking pretty tired. This is what happens when you decide to shoot a TV show about vampires in Toronto in December.

“The lack of sleep makes it difficult,” he admits, “because it’s all vampires and everything [we shoot] outside is at night. And we all go from 5 pm to 5 or 6 am, when the sun rises. That’s the bit that makes you want to cry.”

Clement spun What We Do In The Shadows out of the 2014 feature film he made with his friend and frequent collaborator Taika Waititi. The film is a mockumentary about vampire flatmates living in Wellington, New Zealand, and getting on each other’s nerves. The show is set in Staten Island, following a new trio of immortal bloodsuckers played by Kayvan Novak, Matt Berry and Natasia Demetriou, but the spirit is the same. It’s deadpan foolishness, and if a little sleep deprivation is the price Clement has to pay – he’s the showrunner, a writer, a producer and one of the directors – he’s okay with it.

“It’s freezing here as well,” he adds with a weak laugh. “But it’s still fun.”

Waititi wanders into the room a few minutes later, grinning and looking a lot fresher than Clement. He doesn’t have any of the responsibilities that come with being a creator and showrunner, or overseeing a writing staff that includes sitcom veterans Paul Simms (NewsRadio, The Office), Stefani Robinson (Man Seeking Woman, Atlanta) and Tom Scharpling (Difficult People, Divorce). He can just drop into town and direct an episode here and there – like the season finale, which he’s shooting later that night at Casa Loma.

“I was watching TV until 4 am,” Waititi says about the night schedule. “Saturday morning we wrapped at 6 am. You go to sleep and then you wake up and it’s dark again – so it’s like being a vampire, yeah.”

Waititi’s been dropping in and out to shoot individual episodes, but Clement’s been in town since October, working to convert a few Toronto locations into reasonable facsimiles of Staten Island.

“It can be a lot of places, Toronto,” he says. “It’s quite handy. It was definitely easier doing it here than in L.A. [where they shot the pilot] we had to travel so far to find places that look like the East Coast.”

The series exists in the same universe as the movie – a photo of Clement’s character, Vladislav, sits in the vestibule of the house – and another spinoff, Wellington Paranormal, that the pair produced for New Zealand TV. (There’s also another movie in the works, We’re Wolves, following the werewolves who turned up in the first film, but neither Waititi nor Clement is ready to talk about that.)

Why are vampires such fertile ground? They have a few ideas. “It’s the fantasy,” Clement thinks. “It’s like being a superhero, but it’s dark,” he says with an American nerd inflection.

“Vampires represent the kind of tortured artist we all wish we were – when we’re 20,” Waititi offers. “The idea of living forever as a tortured soul, falling in love, you know, and the choice you have to make of whether to bite this person and curse them for eternity, or let them grow old and die.”

Then there’s the downside of being a vampire, which is all the stuff you can’t do.

“Most people wouldn’t care if you had a character go for a swim in the ocean,” Waititi says, “but they officially aren’t allowed to, according to vampire lore. They can’t swim in salt water.”

“We go by basic 70s, 80s vampire movie rules,” Clement says. “They can turn into bats they can’t go in the sun. They don’t sparkle in the sun, they die. In a lot of literature, vampires have to be invited into private property, but this is a documentary, so these are the actual rules: they have to be invited into any kind of building. It’s good to have limitations it makes it harder for them, because they have so many powers.”

The thing is, keeping track of all the rules has had the weird side effect of turning Clement into a sort of improv cop.“They’ll be talking about swimming and I’ll shout [nasal monotone] ‘They can’t swim!’”

Waititi laughs, clearly glad this isn’t one of his responsibilities. “I researched a lot of vampire lore, and some of the rules are so weird that people would think you were just going over the top. My favourite one is, one way to get rid of a vampire if he’s in your village is to steal his socks, fill them with garlic, tie them up and throw them in the river.”

“He’ll be compelled to retrieve them,” says Clement, not even looking up.“Then he’ll get his socks back,” Waititi continues, “and they’ll be filled with garlic! And he’ll be stuck on the banks of the river.”

“There was one where [the actors] were talking about spilling rice,” Clement says, “and I said [nasal monotone] ‘If a vampire spills rice they have to count it! Every grain!’”

But then there’s the other traditional vampire power: the sexy, sexy sexuality. Which Waititi and Clement both find kind of ridiculous, and encourage their actors to play up for maximum silliness.

“I’ve looked at Interview With A Vampire, and all those films, and I think they’re pretty ridiculous,” Waititi says. “And not that sexy.”

This somehow gets the pair spitballing about the mechanics of a vampire orgy.“Well, the first thing you think about is that they’d all be cold,” Clement declares. “And if someone touches you, you’d be like ‘Eeew, get off! Stop it, go run your hands under the water!’”

Berry’s Laszlo and Demetriou’s Nadja, have been in a relationship for centuries, which adds a perspective that wasn’t available in the original film: what would it be like to really be with someone forever?

“You go through phases,” Clement says. “After a few hundred years the phases become really distorted. There’d be a phase of ‘I just want to kill that person.’ In a normal relationship there’ll be like an hour when you’d feel like that. But for them, it stretches out – ‘Remember those 10 years when we weren’t talking?’ But then the make-up sex is probably way longer, too – like, a couple of months.”