Including The Souvenir Part II, Benedetta, Listening To Kenny G, The Power Of The Dog and the final season of Netflix's Lost In Space 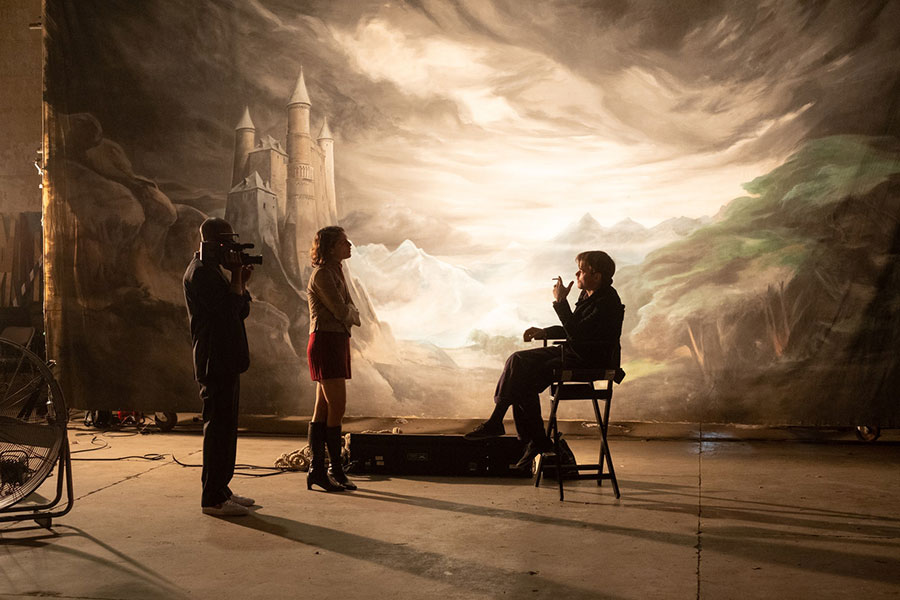 I thought The Souvenir was writer/director Hogg’s masterpiece, a semi-autobiographical drama starring Honor Swinton Byrne as Julie, a film student in early-80s London who nearly loses herself to a toxic relationship with a posh heroin addict (Tom Burke). But now The Souvenir Part II is here to show us what Hogg’s been working toward all along, trading the emotional volatility of the first film for a thoughtful, almost bemused tone as Julie unconsciously pours her grief and anger into her thesis film – and Hogg, in turn, makes us understand how that’s going to save her.

If you missed the first film (which is back at the Lightbox this week, and available on VOD), Part II will still play: like all of Hogg’s films, it’s a perfectly calibrated character study with rich performances and a deep compassion for its frail subjects. (It also has a rollicking supporting turn from Richard Ayoade as Julie’s stylish schoolmate Patrick, now struggling to communicate his vision for a gargantuan, doomed movie musical.) But for those of us who’ve seen the first film, it’s not just an enthralling continuation of Julie’s story but a clever meditation on auteurism and autobiography, a triumph of personal cinema and – obviously – one of the best films you’ll see this year. 108 min. Opens Friday (December 3) at TIFF Bell Lightbox. NNNNN (Norman Wilner)

After two years of rampant speculation and predictable controversy, Verhoeven’s lesbian nun movie is finally here, dramatizing the life of 17th century Italian nun Benedetta Carlini (Virginie Efira), whose stigmatic fugues and conversations with Christ were drowned out by accusations of heresy and lesbianism. Was the Church desperate to deny her sainthood with trumped-up charges? Or was she truly a sinner? Adapting Judith C. Brown’s book Immodest Acts, Verhoeven and co-writer David Birke try to have it both ways, taking their subject at her word while also suggesting the Catholic authorities weren’t totally wrong in their assessment of Benedetta as a con artist. While those braced for offense will certainly be offended by all the flesh on display, as Verhoeven’s movies go this one’s pretty calm; as with 2016’s Elle, he’s more interested in exploring intensities of emotion and commitment than he is in shocking his audience with extreme violence or sexuality. That’s a good thing; what’s less satisfying is the choice to hang all the drama on a character whose essential unreadability gives Efira nowhere to go as an actor. 131 min. Subtitled. Opens Friday at TIFF Bell Lightbox. NNN (NW)

The world’s most famous jazz artist gets a rough ride in Penny Lane’s ridiculously fun documentary, which opens with one critic describing his music as “wallpaper.” But the saxophonist from Seattle, who has sold 75 million albums globally, isn’t exactly hurting. He’s well aware of the uncharitable critiques and is down for this filmic exploration of why some people hate his music as much as others love it. The director, who’s undertaken culture war-type explorations with Nuts! and Hail Satan?, explains the history of the genre Kenny G invented – smooth jazz – and the ways it departs from Black jazz traditions. Lane gives us the biography, goes down all the critical hot-take rabbit holes and delves into production techniques and music theory to suggest why this soothing instrumental music is so resonant with diverse audiences. Kenny G himself is extensively interviewed and makes for an enthusiastic and highly animated subject – his very presence on camera is a demonstration of how his un-self-consciousness is key to his success. What makes Lane so great is that she elevates the kind of moments other directors might cut – the digressions are the main attraction. Now streaming on Crave. 96 min. NNNN (Kevin Ritchie)

Now streaming on Netflix after a brief theatrical run, Campion’s adaptation of Thomas Savage’s 1967 novel stars Benedict Cumberbatch and -Jesse Plemons as Phil and George Burbank, cattle ranchers in 1925 Montana whose dynamic is shattered when George weds the kindly widow Rose (Kirsten Dunst), moving her and her college-age son Peter (Kodi Smit-McPhee) onto the ranch. Campion is a brilliant filmmaker, and she tells her story with merciless competence. But she’s been here before – if seen from Rose’s perspective, this is more or less the same story as Campion’s 1993 breakout The Piano – and the film is further hampered by the miscasting of Cumberbatch as the macho, antagonistic Phil. (For all the actor’s stories of losing himself in the character, he’s never convincing as an intimidating, charismatic frontiersman.) Campion hasn’t directed a feature since 2009’s beautiful, tragic Bright Star, and I can’t blame her for wanting to play to her strengths on this one. Let’s take this as a reassertion of her bona fides and hope she blazes new territory on her next project. 127 min. Now streaming on Netflix Canada. NNN (NW)

Toby Stephens, Molly- Parker, Taylor Russell, Mina Sundwall, Maxwell Jenkins, Ignacio Serricchio and Parker Posey suit up for a final season of Sazama and Sharpless’s high-octane update of Irwin Allen’s beloved 60s series. Those of us who stuck with the Space Family Robinson through two frustrating seasons of laboured world-building and convoluted plotting finally get the show we’ve always wanted – a take on Lost In Space that puts the characters and their relationships ahead of impressing us with expensive space adventure, though there’s still plenty of that. Opening a year after the season 2 cliffhanger that separated the kids of the Resolute from their parents (and also accommodating Jenkins’s startling growth spurt as the now-teenage Will), this season has a little more confidence in the cast’s ability to carry the drama in between life-or-death situations, even slowing down some of those crises in order to let us see our heroes thinking their way through them. Russell’s Judy gets a surprisingly emotional arc, Sundwall remains a delight as sharp-edged middle child Penny and Stephens and Parker keep finding new ways to make super-parents John and Maureen vulnerable and uncertain. It’s a shame Sazama and Sharpless took this long to realize their potential, but at least they finally got there. All eight episodes now streaming on Netflix Canada. NNNN (NW)

After going virtual in 2020, the Toronto fest devoted to “shar[ing] our world’s most important human rights stories through film and conversation” takes a hybrid approach this year, with screenings at the Hot Docs Ted Rogers Cinema, online options and a program that extends well beyond movies and panels. There’s even a free Sunday morning painting workshop with Ashley Beerdat at the JAYU studio (401 Richmond West).

Through December 10; full schedule and ticket information at hrff.ca

The ninth edition of MISAFF presents three features and over 30 shorts grouped into five themed programs), almost all of which are available to watch on the digital TIFF Bell Lightbox platform. (Agam Darshi’s Donkeyhead, which had its gala world premiere last night at the Lightbox and isn’t available digitally.) Features include Raja Ramamurthy’s Tamil dramedy The Myth Of The Good Girl, Anant Mahadevan’s drama Bittersweet and Jonas Poher Rasmussen’s animated documentary Flee, which broke out at TIFF earlier this fall.

Through Monday; full schedule and ticket information at misaff.com

For the second year, the B.C. festival is making its program available to stream across all of Canada – meaning you can take advantage of its wealth of Canadian and international cinema as it rolls out over the month of December. Keep an eye out for Iuli Gerbase’s Brazilian lockdown drama The Pink Cloud (available today), Katie Boland’s first feature We’re All In This Together (December 12), a dramedy about a Thunder Bay family trying not to kill each other (and starring writer/director Boland as squabbling twin sisters), and Jonathan Keijser’s Peace By Chocolate (December 25), based on the true story of a Syrian family that resettled in Antigonish, Nova Scotia. But there are dozens of other films to watch while you wait for those to go live.