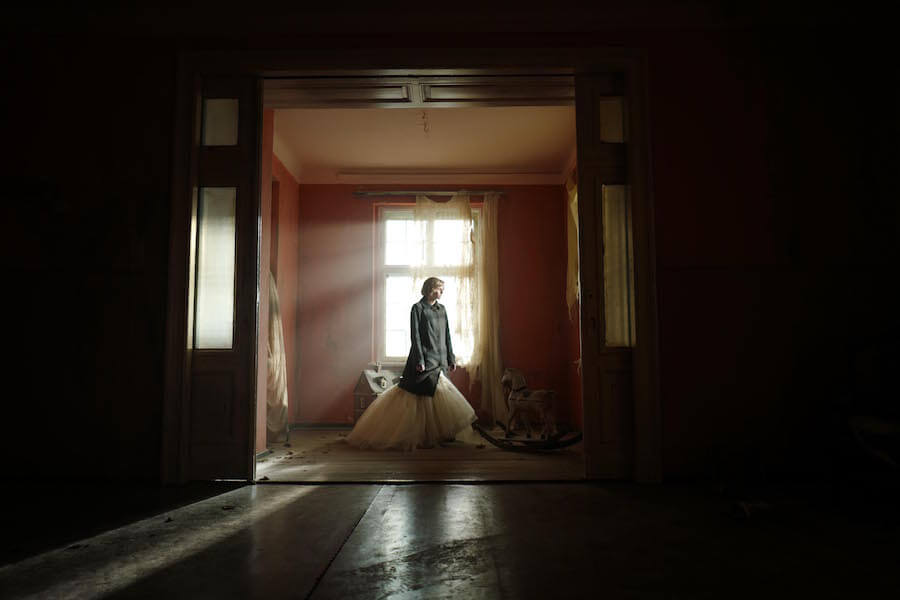 Like its enigmatic and tragic subject, the late Diana, Princess of Wales, Spencer will haunt you. Chilean director Larraín’s film isn’t a standard biopic. Rather, it chronicles a turning point in an iconic woman’s life, mixing things we know and imagining others. It’s Christmas Eve, some 11 years since her fairy tale marriage to Prince Charles, and Diana (Kristen Stewart) is alone in her sports car, late for dinner and lost. She barely knows who she is, let alone where she came from. When a kindly royal staffer redirects her and she finally drives into the enormous estate, Larraín captures the moment in a glorious aerial shot, Diana’s car as tiny as a bug. It looks like she’s entering a fortress. Gradually, we pick up details from Steven Knight’s efficient script. Diana’s marriage to Charles is a sham; she’s routinely late and has an eating disorder; and the only warmth she has for anyone is with her young boys and with her staff, especially her long-time personal attendant Maggie (Sally Hawkins).

Larraín has total control over his material, capturing empty halls and beautifully appointed rooms with a sense of alienation and unease. The way he paces the film and orchestrates the foreshadowing elements is masterful. Jonny Greenwood’s score adds layers of complexity, suggesting improvisatory jazz and clanging, anxious percussion. Stewart, meanwhile, is wholly sympathetic and believable. She’s perfected the woman’s ambivalent tilted head and modest downward gaze. Spencer won’t be for everyone. It’s a little slow at times, but it’s a fascinating, absorbing look at personal freedom in the face of centuries of tradition. 111 minutes. Opens Friday (November 5) in theatres. NNNN (Glenn Sumi)

Okay, first of all: Eternals isn’t totally Chloé Zhao’s fault. It’s entirely possible that Jack Kirby’s gonzo comics property cannot exist anywhere other than the panels of a Giant-Sized Marvel Treasury, where Kirby’s elaborate universe of immortal near-gods battling ancient evil across the millennia could splash across as many oversized panels as its legendary creator could draw. Scaled down to human size, dressed in street clothes and forced to sulk about their relationships or debate the moral consequences of their acts, these characters lose their dazzle; they’re just a squabbling super-family, and the Avengers movies already did that. Worse, Zhao and her co-writers repeatedly refuse to make any room in her movie for fun or thrills. Eternals is two and a half hours of sustained glumness as we watch a very talented cast (including Gemma Chan, Richard Madden, Angelina Jolie, Salma Hayek, Brian Tyree Henry and Kumail Nanjiani) stand around waiting for their motivation to arrive. For every step forward – the colour-blind casting, the introduction of deaf and queer characters, the franchise’s first sex scene – Eternals manages to get three or four other things disastrously wrong; it’s shocking that the director of a film as nuanced and alive as Nomadland would deliver something as cold and inert as this. 157 min. Some subtitles. In theatres Friday. N (Norman Wilner)

In Thunder Road and The Wolf Of Snow Hollow, writer/director Cummings cast himself as a swaggering professional whose mask of confidence drops at the slightest challenge. Here, collaborating with co-star McCabe, he’s all anxious panic as Jordan, a Los Angeles talent agent plunged into a paranoid fugue state after he responds to an invitation for a no-strings sexual encounter: he’s convinced he’s about to be blackmailed and desperate to find out who’s pulling the strings. Imagine Eyes Wide Shut played for awkward, insecure comedy instead of creeping portent, and you’ll have a sense of what’s going on – though a subplot about the operation apparently triggering people to murder their partners does provide an appropriate undercurrent of dread. As in his previous pictures, Cummings has an unerring sense of exactly how far to push his alpha-male posturing, making a running gag out of Jordan’s habit of snapping at people and reflexively apologizing, and he and McCabe make sure Virginia Newcomb has plenty of room to develop the character of Caroline, Jordan’s understandably confused and increasingly suspicious fiancée. 93 min. Some subtitles. Available on digital and on demand Friday. NNNN (NW)

The kids of Bridgeton Middle School continue to endure the longest adolescence in human history, as Kroll and Goldberg’s surreal animated comedy returns to subject Nick (Kroll), Andrew (John Mulaney), Jessi (Jessi Klein), Missy (Ayo Edebiri), Jay (Jason Mantzoukas) and Matthew (Andrew Rannells) to a fifth season of misery, humiliation and torment by overly enthusiastic hormone monsters (Kroll, Maya Rudolph, Thandiwe Newton). This year’s biggest problem is crushes, with everyone falling hard for everyone else – and going feral when their affections aren’t reciprocated. It changes the dynamics just enough to keep things unpredictable, while also maintaining the same atmosphere of enthusiastic chaos the show has perfected over the years. This season is more meta than ever, which doesn’t always work but does offer the joy of Kroll’s Maury and Mulaney’s Andrew debating tonal choices in little throwaway exchanges. There’s also a format-breaking Christmas episode that finds room for puppets, stop-motion and – somehow – a John Wick parody starring Jay’s dog. More screen time for Missy means Newton gets more to do as Missy’s hormone monster Mona – but Rudolph’s Connie remains the show’s greatest asset, able to turn whatever ridiculous dialogue the writers throw her way into the plosive equivalent of ASMR. All 10 episodes available to stream Friday on Netflix Canada. NNNN (NW)

The Eyes Of Tammy Faye

The Spine Of Night

The pandemic having derailed plans for a more elaborate edition, the TSFF returns to the Revue Cinema this weekend with the first of three mini-festivals; the second will be held over the weekend of December 4-5, and the third in early January. For now, catch a two-hour selection of Charlie Chaplin and Buster Keaton shorts (Saturday, 4 pm), with musical accompaniment by Jordan Klapman, and a screening of E.A. Dupont’s 1928 backstage drama Moulin Rouge (Sunday, 4 pm), accompanied by William O’Meara.

Paramount’s centenary release of the movie that made Rudolph Valentino a matinée idol is an essential contribution to cinema history – for good or ill. George Melford’s saga of an English noblewoman (Agnes Ayres) who becomes the captive, and then lover, of lustful Middle Eastern warlord Ahmed Ben Hassan (Valentino) is positively retrograde in its colonial, sexist perspective, but as a piece of cultural history it’s something that needs to be preserved: this is what audiences wanted to see 100 years ago, and now we can watch it and study it the way it was originally experienced. And it would appear that most of the attraction came from Valentino’s undeniable screen charisma, rather than the extremely problematic narrative. Paramount’s restoration is a stunning achievement given the state of the materials available; there’s still some print damage, but the frame rate, the colour tinting and overall quality feel consistent throughout and even organic. This is a huge improvement over the Kino Lorber Blu-ray released in 2017, which made the best of a less than ideal source; if you’re looking to understand why Valentino became the equivalent of a modern megastar – and why his death just five years later would devastate America – this disc conjures him back to life. Supplements are limited to a short retrospective; Gaylyn Studlar’s scholarly audio commentary remains the property of Kino Lorber. But the restoration is the central attraction here. (NW)