Including Titane, Maid, The Guilty and Sopranos prequel The Many Saints Of Newark 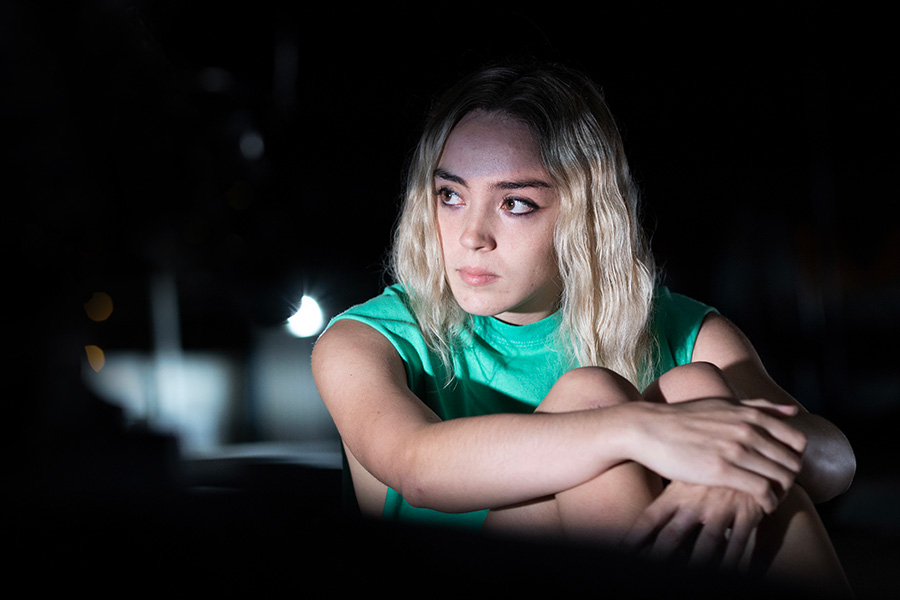 Julia Ducournau’s Palme d’Or-winning tale of sex, cars, murder, identity and belonging is one of the year’s wildest rides, rolling into theatres fresh from winning the Midnight Madness People’s Choice award at TIFF, where its fleshy, oily aesthetic and rampant perversity was (rightly) embraced by audiences. But Ruben Impens’s glistening cinematography will still dazzle in a conventional presentation, and Agathe Rousselle’s magnificent, unreadable performance as a young woman whose character arc can be best described as “going through some stuff” is a marvel at any scale. By contrast, Rousselle’s co-star Vincent Lindon is entirely readable as a firefighter who forges an extremely unlikely connection to her character, his simultaneously wounded and hopeful gaze giving the film surges of emotional complexity when it needs it most. I refuse to discuss the plot of the film at all – what would even be the point? – but if you can imagine David Cronenberg’s Crash and Clare Denis’s Beau Travail having furious make-up sex after a week-long fight, and raising the resulting baby on nothing but Leos Carax movies, that’s Titane. This is an endorsement. 108 minutes. Subtitled. Now playing in theatres. NNNNN (Norman Wilner)

Fleeing with her two-year-old daughter from an emotionally abusive relationship, young mom Alex (Margaret Qualley) takes a job with a cleaning service to make some quick cash and put a roof over their heads. At least that’s the initial premise of this limited series from the people who made the American remake of Shameless – among them writer/producer Metzler and producer/director John Wells – which liberally fictionalizes Stephanie Land’s memoir Maid: Hard Work, Low Pay And A Mother’s Will To Survive. Maid is exactly what you think that team would deliver: an occasionally moving study of working-class anxiety that’s also desperate to take the edge off of the story it’s telling with little comic flourishes and outsized performances, the better to make it accessible to viewers who might otherwise recoil from the darkness. The difference here is that the comic stuff just doesn’t work, and though Qualley (Once Upon A Time… In Hollywood, My Salinger Year) does her best to hold it all together she can’t do it alone, especially as it becomes clear Maid is stretching out a story better suited to a feature film to fill 10 episodes of television. All 10 episodes now streaming on Netflix Canada. NN (NW)

A nail-biting plot and a ferocious (if unrestrained) performance by Jake Gyllenhaal are the main reasons for watching this remake of the superior 2018 Danish thriller. Gyllenhaal plays Joe Baylor, an L.A. cop working a late shift at a 911 dispatch centre. When he gets a call from a woman (Riley Keough), who’s been abducted and is in the back of a van, he scrambles to save her, his anger building at each roadblock. Meanwhile, he’s got a court hearing the next morning about something he may have done on the force. With its single location and limited on-screen cast (voice actors include Peter Sarsgaard, Ethan Hawke and Paul Dano), this obvious pandemic project has a built-in momentum, yet Fuqua can’t generate much visual interest from pulsing red circles on maps of SoCal. The idea of police violence has a different meaning in the U.S. than Denmark, and Gyllenhaal is suitably intense and exhausted-looking. But his performance could use some shading, especially in the film’s final moments. Now streaming on Netflix Canada. NNN (Glenn Sumi)

The Many Saints Of Newark

You have to wait for it: the chilling moment when Michael Gandolfini channels his late father James. He’s staring at a corpse, brooding, contemplative, holding his emotions in while giving big Gandolfini energy. If only the rest of the Sopranos prequel was as simple and effective as that split second when the young actor seems to step into his father’s shoes.

Unfortunately, the Tony Soprano storyline is more like fan service in The Many Saints Of Newark, which is really more about the future mob boss’s uncle and father figure, Dickie Moltisanti (Alessandro Nivola). Sopranos buffs will recognize the name Moltisanti. Dickie’s son Christopher (Michael Imperioli) was Tony Soprano’s Achilles’ heel in the series, and the movie’s origin story attempts to flesh out why the latter was so devoted to the young Moltisanti; not that it actually needed explaining. In Many Saints, Dickie mentors a teenaged Tony in brief familial exchanges while surviving the New Jersey crime scene and dealing with turbulence from a Black up-and-comer named Harold (Leslie Odom, Jr.) who the Italians constantly underestimate and make unwelcome. The latter’s storyline feels less like a fully formed and compelling thread, and more like a concession to recent conversations about diversity and anti-Black racism.

But that’s not the only aspect that feels under-cooked in a movie that squeezes a whole season’s worth of characters and threads into feature length. The Many Saints Of Newark does a curious thing by stretching television IP for the big screen canvas, while recent trends are going in the opposite direction, but refusing to condense its arc for a big-screen runtime. As a result, no character or thread end up as compelling as Gandolfini’s thoughtful stare in the finale, which is really just a pointed reminder that we should all be re-watching The Sopranos. Perhaps this was the plot all along. 120 minutes. Now playing in theatres. NN (Radheyan Simonpillai)

Adventures Of A Mathematician

Hail To The Deadites

The 21st edition of the Latin film and media arts festival is halfway through its online program, but there are still two programs remaining: Caribbean Night (Friday, 7 pm) assembles a collection of dramatic and documentary shorts from all over the region, while the closing night gala Un Traductor (Saturday. 7 pm) is a drama – based on a true story – about a Russian literature professor reassigned to work as a translator for young victims of the Chernobyl leak, transferred to Cuba for treatment. There’s also a free online art project, Negro / A / X Creative Art Justice, curated by Puerto Rican artist Celso Gonzalez, that’s available to view for free all weekend.

Honestly, would you feel comfortable going into a movie theatre in Alberta right now? The CIFF is streaming most of its program across Canada, which gives Toronto viewers the chance to catch up to some TIFF titles they may have missed, like All My Puny Sorrows, Becoming Cousteau, Dug Dug, Jockey, Mothering Sunday, The Rescue and Wildhood. Or you could check out a dozen other movies that didn’t play here, just to be a maverick. They do that out west.

Based in Montreal but streamable throughout Canada, the 8th annual KFF forcuses on “Narratives Beyond Borders: Women’s Perspectives In The Korean Cinema 1959-2021”. But the festival isn’t limiting itself to Korean productions, offering a selection of Canadian cinema in its Side By Side program, including Tiffany Hsiung’s The Apology and Sing Me A Lullaby, Sonia Boileau’s Rustic Oracle and Kathleen Hepburn and Elle-Máijá Tailfeathers’s The Body Remembers When The World Broke Open.

The city’s only multi-day food and film festival – which arranges screenings of gustatory cinema with curated snacks and tasting menus – acknowledges that not everyone might be ready to sit inside with a bunch of other unmasked people just yet, so this year is a hybrid affair, with in-person events at the Spadina Museum (285 Spadina, near Casa Loma) and the film program – which includes one of our Hot Docs favourites, John Daschbach’s ramen-bar requiem Come Back Anytime – available to stream for a couple of weeks.

The death of Melvin Van Peebles late last month came as a shock. Sure, he was 89, but it didn’t seem that a life-force so lively, so engaged and so enthusiastic could ever be extinguished. But there was also something very 2021 about the legendary American independent not getting to see the response to this terrific Criterion Collection boxed set of his cinema.

The collection arrives for the 50th anniversary of Van Peebles’s landmark Sweet Sweetback’s Baadasssss Song, a go-for-broke action movie that rivals Jean-Luc Godard’s Breathless for its outlaw heart and genre-challenging construction, and incidentally invented the template for what would become the Blaxploitation genre. It’s an accomplishment that’s all the more impressive for being done almost single-handedly, with Van Peebles writing, producing, acting, directing, editing and even composing the music himself.

Sweet Sweetback remains his best-known film (and one of Criterion’s early laserdisc releases, which featured a vintage audio commentary that’s included here), but the three other features included in this set are just as important. There’s his 1967 debut, The Story Of A Three Day Pass, a romantic drama starring Harry Baird as a Black soldier on leave in Paris, where he falls for a French woman (Nicole Berger) and glimpses the possibility of a life different from anything he’d ever imagined for himself. I’d heard about it but never seen it until now, and it’s bracingly modern in its narrative and its execution. (Hal Ashby’s The Last Detail feels like a homage, in retrospect.)

The 1970 comedy The Watermelon Man, which stars the comedian Godfrey Cambridge as a white bigot who wakes up one morning as a Black man, is a little harder to watch now, thanks to the awkwardness of Cambridge being introduced in whiteface and the film’s dated look. One gets the sense Columbia Pictures tried to make it as safe as possible to cater to white audiences, and Van Peebles did his best to work around the studio’s notes. It still plays, but it’s clunky.

Much more lively is Don’t Play Us Cheap, Van Peebles’s 1972 film of his own Broadway musical, which reaches back to stage shows of the 30s and 40s for a story of supernatural pests who crash a house party in Harlem. With a cast that features Rhetta Hughes, Esther Rolle, Mabel King and Frank Carey, and a joyous songbook written by Van Peebles himself, it feels like a snapshot of history; I wished I could have seen it live.

All four features are presented in new 4K restorations with cleaned-up audio (and 5.1 DTS-HD for Don’t Play Us Cheap), with introductions by the filmmaker and supplements aplenty. Van Peebles’s son Mario, an actor and filmmaker in his own right, approved the masters and participated in the supplements, which include his own 2003 movie about the making of Sweet Sweetback, Baadasssss!, in which he stars as his own father. (The supplements produced for that film’s earlier DVD releases, including an invaluable father-son audio commentary, are included here.)

Most invaluable are the archival interviews from Black Journal and Detroit Tubeworks, which show the elder Van Peebles at his most comfortable and loquacious; there’s also a French television segment on the set of Three Day Pass with Van Peebles and his actors. And it’s all packaged in a stately slipcase with a book of essays by Racquel J. Gates, Allyson Nadia Field, Michael B. Gillespie, and Lisa B. Thompson. I just wish Melvin could have lived to see the box make it to stores. (NW)