Including Dune, The Electrical Life Of Louis Wain and Netflix's The Harder They Fall and Locke & Key season 2 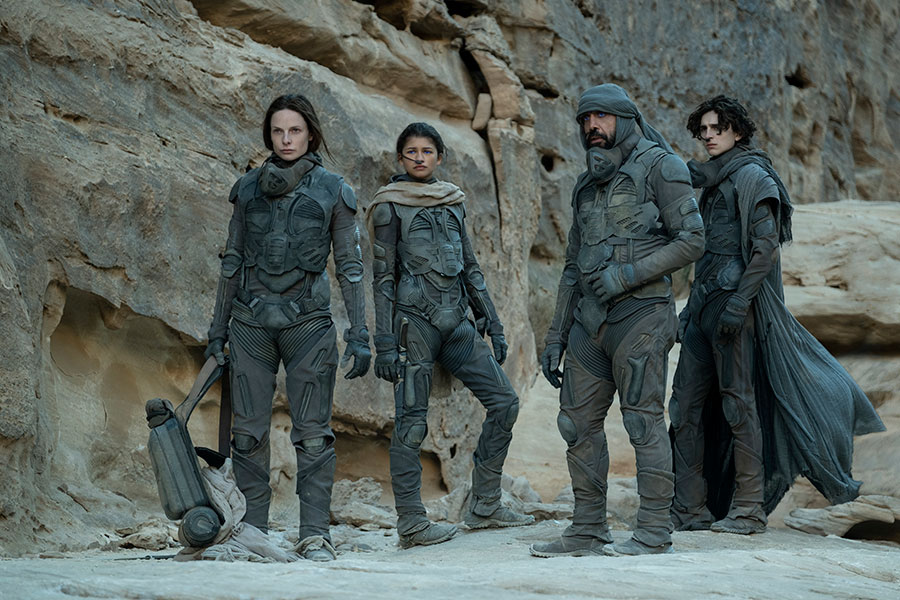 Villeneuve’s years-in-the-making, super-ambitious adaptation of Frank Herbert’s revered sci-fi novel is finally here: a sumptuously realized, interestingly cast tale of warring houses, all-knowing religious orders, messianic prophecies, giant sandworms and the untested young man who becomes the leader of an oppressed people bent on reclaiming their world from colonizers stripping it for their own gain. And at first, Villeneuve’s awe-soaked sci-fi aesthetic – which gave Arrival and Blade Runner 2049 their sense of grandiose wonder – feels like a good lens through which to view Herbert’s story, which is filled with elaborate ceremonies and characters who deliver self-important lectures about familial honour and duty. Everything feels respectful and considered… and in the end, the filmmaker’s respect for the material is what smothers the film. Any truly faithful adaptation can’t work as a movie; Herbert’s philosophy and labyrinthine mythology simply take up too much space, pushing the genuinely thrilling moments too far apart to build any kind of storytelling momentum. Villeneuve spends two and a half hours on the book’s first half, laying pipe that will presumably pay off in the much more interesting conclusion. It’s an IOU, basically, and for fans of the books it might be enough. But for those of us who don’t regard Herbert’s novels as scripture, it just hangs there, suspended in its own gravitational pocket like one of Villeneuve’s star cruisers. 155 min. Some subtitles. Now playing in theatres. NN (Norman Wilner)

Like the meme says, The French Dispatch is the most Wes Anderson thing Wes Anderson has ever Wes Andersoned: taking the nested narratives and chronological hopscotchery of 2014’s The Grand Budapest Hotel (as well as most of its cast) and applying it to a feature-length salute to the patrician attitude of intellectual publications like The New Yorker, repurposed here as an impossible European arts magazine edited by one Arthur Howitzer Jr. (Bill Murray), whose death opens the magazine’s final issue – brought to life as an anthology of pleasantly preposterous stories that revolve around obsession and risk. An artist (Benicio Del Toro) is discovered in a prison by an art dealer (Adrien Brody); a student revolutionary (Timothée Chalamet) is idolized (and bedded) by the writer (Frances McDormand) assigned to cover him; another writer (Jeffrey Wright), invited to dine with a police inspector (Mathieu Almaric), is drawn into a most unlikely hostage situation. It is never unpleasant, and occasionally quite delightful, but for all the frenzied activity (and, of course, the meticulous tableau imagery), The French Dispatch feels like a collection of sketches for larger movies rather than a film of its own. Curious, that. 108 min. Some subtitles. Now playing in theatres. NNN (NW)

The second season of Netflix’s teen-friendly spookhouse series doesn’t lose a beat, maintaining the clever balance of high school conflict and lurking demon horror that showrunners Cuse and Averill brought to Joe Hill and Gabriel Rodriguez’s comic series. As before, siblings Tyler (Connor Jessup), Kinsey (Emilia Jones) and Bode (Jackson Robert Scott) have to protect the magical keys hidden in their family home from the demons who covet them. This time, the demons are a little craftier, having possessed Kinsey’s boyfriend Gabe (Griffin Gluck) and mean girl Eden (Hallea Jones) to walk amongst the town of Matheson undetected. This season feels more confident, leaning into the slip-sliding tone even more – for every colossal gummy bear, there is a giant rampaging spider – and adding notes of genuine tragedy to a subplot that explores what happens as characters age out of the youthful ability to comprehend magic. The series still struggles to find things for Darby Stanchfield to do as the kids’ mom Nina, but maybe Cuse and Averill can work that out for season 3. All 10 episodes now streaming on Netflix Canada. NNNN (NW)

The Harder They Fall

The Harder They Fall has so much swagger and locomotive energy – with six shooters blasting off to hip-hop and reggae – that it powers over some of its more superficial elements and the fault lines in its plotting. The revisionist Western starring powder kegs like Regina King, Jonathan Majors and Idris Elba has a playfulness commonly attributed to Tarantino – think freeze frames, split screens and cheeky title cards – as if Sweet Sweetback’s Baadasssss Song director Melvin Van Peebles didn’t get there first. And the movie challenges the erasure of Black cowboys in the Old West much the same way as Mario Van Peebles did with his 1993 take on the wild west, Posse. But director and musician Jeymes Samuel makes The Harder They Fall look, sound and feel like a whole new beast, taking real figures from the post-slavery Old West like Nat Love (Majors) and Stagecoach Mary (Zazie Beets) and remixing their history into pure badassery. The action is thrilling. Instead of sitting back to watch, Samuel makes the camera feel like it’s part of the action, ducking and weaving between bullets and finding new positions for the best shot. And the views are stunning – I could get lost in the rugged terrain and King’s icy stare all day. 139 min. Now playing in theatres and streaming on Netflix November 3. NNNN (Radheyan Simonpillai)

The Electrical Life Of Louis Wain

Benedict Cumberbatch needs to stop playing socially awkward geniuses. Although I don’t think anyone could salvage this biopic about Louis Wain, the eccentric English painter who created kitschy portraits of anthropomorphized cats in the late 19th and early 20th centuries. First-time feature filmmaker Will Sharpe, who also co-wrote the screenplay, can’t find the right tone for his subject, settling on a playful, cutesy approach (with narration by Olivia Colman) that trivializes everything from the rigid Victorian-era class structure to mental illness and poverty. There are some lively performances by Claire Foy as Wain’s wife, the former governess of his siblings, and by Toby Jones as the savvy publisher of the newspaper that hires him as an illustrator. But Cumberbatch is left stranded in a film that doesn’t know what it wants to say about art, society or the strange forces suggested by the title. 111 min. Now playing in theatres. N (Glenn Sumi)

Smoke And Mirrors: The Story Of Tom Savini

The annual festival of Indigenous screen content opened with Danis Goulet’s dystopian thriller Night Raiders earlier this week and followed it with the Toronto premiere of writer/director Trevor Mack’s Portraits From A Fire, nicely demonstrating the range of Indigenous stories being told at this moment in Canadian cinema and the scope of talent working to tell them. Both films will be offline by the time you read this – though Night Raiders is still playing in theatres and Portraits From A Fire will hit VOD November 9 – but there’s plenty more on offer to stream through the weekend, both domestic and international. I’m especially curious to see the new film from Kayak To Klemtu director Zoe Hopkins, Run Woman Run (available Saturday morning), starring Dakota Ray Hebert as a B.C. woman who responds to a health scare by training for a marathon.

After going virtual in 2020, Toronto’s premier BIPOC film festival resumes in-person events for its 2021 edition – with screenings at the Paradise Cinema Sunday and Monday… though if you’d rather attend virtually, that’s also an option; all-access digital passes can be had $33.90. And the online program is much larger, with exclusives like Kaveh Nabatian’s Cuban-set drama Sin La Habana and Vinay Giridhar’s documentary Emergence: Out Of The Shadows, which follows three Vancouver residents trying to reconcile their queer identities with their Punjabi Sikh upbringing.