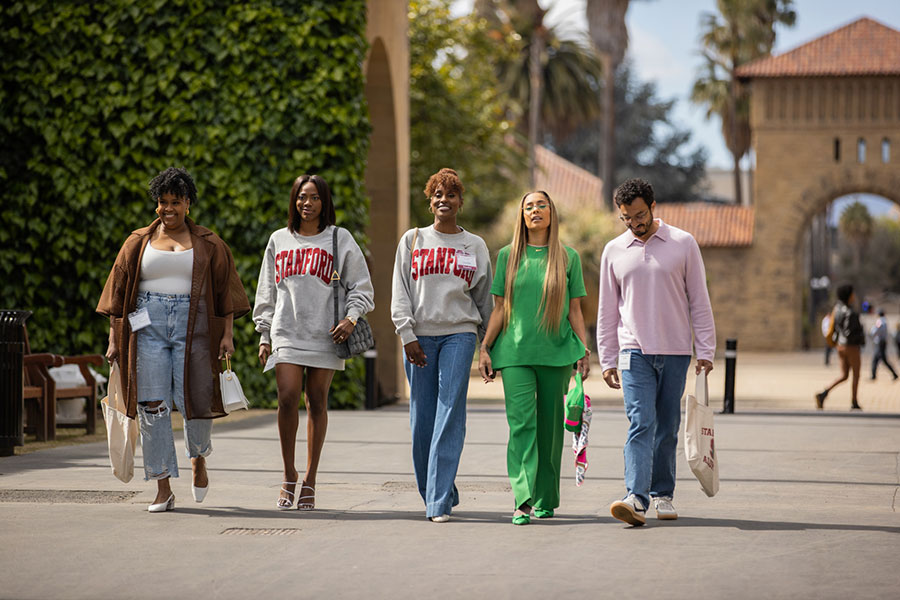 Insecure’s fourth season finale teased a denouement to Issa (Issa Rae) and Molly’s (Yvonne Orji) drifting estrangement. At the root of the unspoken tension between the two besties was Molly’s stubborn desire to make her preconceived notion of an upwardly mobile lifestyle a reality, and flailing entrepreneur Issa’s more grassroots ideals didn’t fit the vision. With that relationship on the mend, the fifth and final season of the Los Angeles-set HBO comedy opens with the central friendship foursome attending a college reunion that prompts Issa to intently contemplate her future, essentially placing the shoe on the other foot. Can she level up without compromising ethics and artistry?

Based on the first four episodes sent to critics, S5 delivers on what Insecure does best: light comedy wrapped in a vivid and romantic portrait of Los Angeles. But there are a few sharper shifts in perspective that create what feels like a slightly more well-rounded view of the ensemble than in past seasons. Natasha Rothwell’s Kelli is still a scene-stealer, and even though it seems like she won’t be getting a full-fledged arc she gets good airtime in episodes 1-4. Insecure is sharply observant when it comes to nuanced social and class tensions, even though its reliance on melodramatic twists feels like the writers’ room is pulling the eject switch.

It may look like cinema, but this is very much episodic TV. Then again, the ways Insecure moves between online and offline realities, and what characters think versus what might actually be happening is cleverly realized. Moment-to-moment, the show remains a pleasure to take in even if the endings aren’t as satisfying as the journeys. New episodes air Sundays at 10 pm on HBO and stream on Crave. NNNN (Kevin Ritchie)

Having remixed the American car-chase picture in Baby Driver, Wright returns to his native England for a slower, more sinister endeavour. Last Night In Soho stars Thomasin McKenzie as Eloise, a sensitive young woman who comes to London to study fashion, rents a room from a nice old lady (Diana Rigg) and finds herself somehow connected to the experiences of a young woman named Sandie (Anya Taylor-Joy) who lived in the mid-60s. Where the story goes from there is best left undisclosed – but this movie’s more about mood than plot, anyway. Wright and co-writer Krysty Wilson-Cairns apply the dream logic of Italian giallo thrillers to Eloise’s situation, their modern protagonist haunted by Sandie’s dark trajectory. Last Night In Soho is haunted, too; by memories of Swinging London, by the screen histories of co-stars like Terence Stamp, Rita Tushingham and Rigg, and by the ugliness of the city that lurks down alleys and under archways. The movie is a sort of séance for a vanished era of British cinema, reaching out to see what might still have power. 116 min. Now playing in theatres. NNNN (Norman Wilner)

In a crumbling -Oregon mining town, a schoolteacher (Keri Russell) comes to believe one of her pupils (Jeremy T. -Thomas) is hiding a horrible secret. And he is: his father (Scott Haze) and younger brother (Sawyer Jones) have been possessed by an ancient, malevolent spirit. Like Hostiles and Black Mass and Out Of The Furnace before it, Antlers is an overly self-serious attempt to infuse a genre narrative with social commentary, but Cooper just can’t pull all of the strings together. Antlers wants to talk about cycles of abuse and the foundational sins of genocide and exploitation that are written into America’s DNA, but tonally it’s a by-the-numbers monster movie with predictable jump scares and carnage. (Some of the tonal incoherence is almost certainly the result of a post-production overhaul; I’d be awfully curious to see whether Cooper’s first cut – which must have been at least half an hour longer and structured very differently – plays any better.) Russell does what she can with her underdeveloped character and Jesse Plemons is quietly excellent as her brother, the overmatched local sheriff. But the movie around them is just a mess. 99 min. Now playing in theatres. NN (NW)

With his first dramatic feature, documentarian Leong (Linsanity) brings an almost experimental texture to the pulpy beats of a gangster picture. Based on the story of Cheng Chui Ping, who rose to the head of a human-trafficking organization in 90s New York City, Snakehead stars Shuya Chang (Revenge Of The Green Dragons) as Sister Tse, a Chinese ex-convict whose inhuman stamina as she climbs the underworld ladder has a very human motivation: she’s doing all of this to find the daughter who was taken away from her years earlier. Jade Wu, last seen in Marvel’s Luke Cage series, is Dai Mah, the pragmatic boss who takes Tse under her wing; Sung Kang, of the Fast & Furious cycle – on which Leong has worked as a second-unit director – is Mah’s eldest son Rambo, the obligatory loose cannon whose hair-trigger temper puts him on a collision course with Tse. Leong’s approach charges a familiar story with unpredictable life, subverting audience expectations with scrambled chronology, minimal dialogue and unexpected humour. If Johnnie To was working in America, his movies might look like this. That’s a compliment. 96 min. Some subtitles. Now available on digital and on demand. NNNN (NW)

The Hidden Life Of Trees

The annual festival of French-language cinema returns in a hybrid edition, with three screenings at the Hot Docs Ted Rogers Cinema and dozens of features, documentaries and shorts streaming (mostly) Canada-wide – although both the comedy Eleonore, starring Nora Hamzawi as a struggling author who takes a job at an erotica publisher, and Sophie Dupuis’s tense mining thriller Underground are only available in Ontario. But you can watch the collective pandemic project First Wave – about four fictional Montrealers enduring the first 100 days of COVID-19 – anywhere in the country.

BITS 2021 is doing double duty this year, splitting itself into a home version this weekend on Super Channel Fuse and an in-person edition November 18-23 at The Royal. The Super Channel programming offers another chance Rueben Martell’s Indigenous creeper Don’t Say Its Name (Friday, 9 pm), Mark O’Brien’s Catholic fever dream The Righteous (Saturday, 11 pm) and Seth A. Smith’s Tin Can (Sunday, 11:30 pm) if you missed them at Fantasia or their other festival engagements, and there’s always something fun in the horror shorts collection (Saturday, 7 pm).

Through Sunday on Super Channel Fuse.

You can find NOW’s (sponsored) guide to this year’s festival here, but there are a few other highlights in the 2021 program, including Elle-Máijá Tailfeathers’s heartfelt documentary Kimmapiiyipitssini: The Meaning Of Empathy and a Halloween night screening of Todd Haynes’s suffocating 1995 Safe, featuring one of Julianne Moore’s devastating performance as a Los Angeles woman whose comfortable life is destroyed by an inexplicable illness. Both films are available as virtual or in-person screenings, and all festival programming is Pay What You Wish.

I should start by declaring that I have very little regard for the Underworld movies: they’re very silly, frequently dumb as a post, and the last two movies in the cycle are downright terrible, taking the story from the bone-stupid “vampires and werewolves stand at opposite ends of corridors unloading automatic weapons at each other” concept to an incomprehensibly convoluted dystopian future where vampires are hunted by the humans they once regarded as food, and somehow everyone still winds up standing at opposite ends of a corridor unloading automatic weapons at each other.

That said, Kate Beckinsale manages to has some fun with her one-dimensional role as the merciless “Death Dealer” Seline, who – in the first film alone – discovers herself to be a pawn in the centuries-old war between vampires and “Lycans,” falls in love with a human (Scott Speedman) and manages to turn him into a vampire-Lycan hybrid, making Romeo and Juliet-style fugitives of them both. Bill Nighy and Michael Sheen are clearly enjoying chewing their dialogue in their recurring roles as the heads of the rival clans – though Sheen looks positively miserable in his sole starring role in the series, the creaky prequel Rise Of The Lycans. Maybe it’s a testament to Beckinsale’s abilities that by the time the series wheezes to an end in Underworld: Blood Wars, we can tell it’s Seline who’s ready to give up the fight, not the performer.

Having all five films available in new 4K masters – packaged in an icy blue boxed set that nicely mirrors the movies’ dominant color palette – offers a nifty opportunity to chart the evolution of the franchise on a technical level, crisp 35mm cinematography and relatively restrained CG effects transitioning over the years into slapdash digital nonsense as new production teams struggle to recapture the spark that made Len Wiseman’s original Underworld and Underworld: Evolution click with audiences on diminishing budgets and a self-limiting concept. Seriously, the series runs out of ideas about 20 minutes into the second one and spends another full decade finding other ways to re-stage the same conflicts.

Still, if you like these movies more than I do, this is the best way to watch them – in pristine quality, with Dolby Atmos soundtracks for all five films and all the supplemental material produced for the previous Blu-ray and DVD releases, some of it upgraded to Ultra High Definition: both the theatrical and extended versions of the original Underworld are included in 4K, and the Awakening disc offers the three-part animated prologue Endless War in UHD as well. So it’s got that going for it. (NW)