Including Lamb, No Time To Die, The Rescue and Events Transpiring Before, After, And During A High School Basketball Game 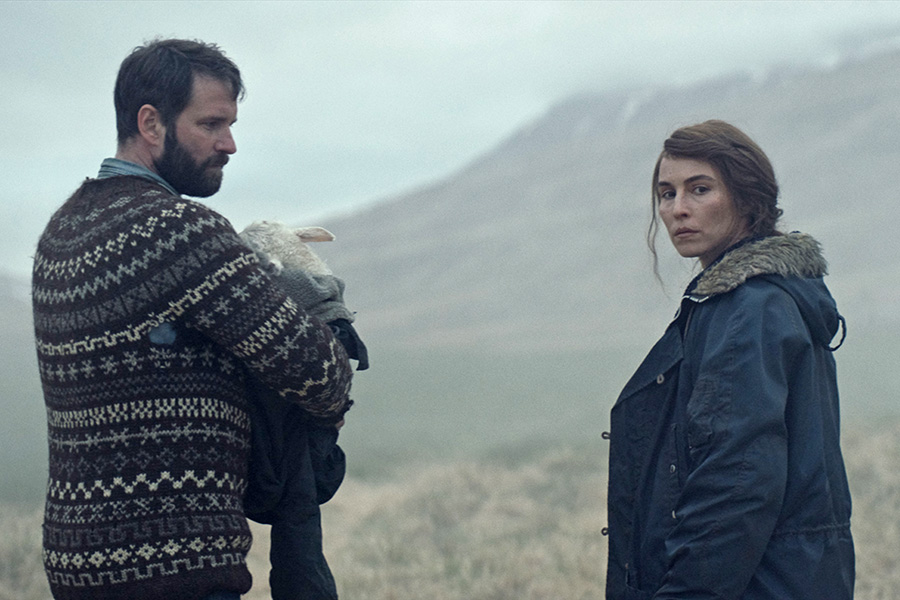 You won’t be surprised to hear Lamb is the latest elevated genre picture from U.S. distributor A24, which has built a reputation on the bespoke strangeness of projects like Ari Aster’s Hereditary and Midsommar and David Lowery’s A Ghost Story and The Green Knight, among others. Lamb is a Scandinavian import that slots right onto that artisanal hand-carved shelf, a folk tale in modern dress about childless farmers (Noomi Rapace, -Hilmir Snær Guðnason) who take in an unlikely newborn and raise it as their own. The nature of that newborn is withheld from us for a good 40 minutes, as Jóhansson – who co-wrote the script with frequent Björk collaborator Sjón – lures us into his story slowly and carefully, Rapace and Guðnason selling the effect long before we ever see it. Lamb is a tightrope walk between the sublime and the preposterous, accomplished with a mixture of puppetry, CG and tone. And even though the whole thing ultimately feels like a short film stretched out to feature length, the accomplishment is impressive. 106 min. Subtitled. Now playing in theatres. NNN (Norman Wilner)

The 25th official James Bond movie is the fifth and final outing for Daniel Craig in the role. I love Craig’s Bond – the actor captures the brutality and cruelty so essential to Ian Fleming’s conception of the character – but his movies don’t know what to do with him. James Bond has become an aspirational figure, trapped in the same superhero narrative as any Marvel or DC character: he can’t really change or grow, because that would bring the whole thing to a halt. And over five films, the weird insistence that what this dead-eyed assassin really wants is to be part of a family – whether that’s the work family he’s built at MI-6, or other elements dangled throughout – has pushed against Craig’s performance in an interesting, frustrating way, as though the actor, rather than the character, is rejecting the premise. Also, the specifics of this movie’s plot are both overly familiar and incomprehensible: No Time To Die wants to be an elevated Bond film, but that sort of stance displays a certain contempt for the endeavour; maybe, just maybe, focus on making a Bond movie that moves, that thrills, that doesn’t save all of its most daring choices for the last five minutes, and it’ll elevate itself. 163 min. Some subtitles. Now playing in theatres. NN (NW)

Free Solo directors Vasarhelyi and Chin follow that Oscar-winning doc with this look at the 2018 Tham Luang rescue, during which a handful of British cave divers came to Thailand to retrieve a soccer team and their coach trapped in a flooded cave system. Given access to the divers and the hours and hours of footage shot over the course of the endeavour, Vasarhelyi and Chin compress a three-week operation into a crisp two hours, conveying both the terrifying scale of the challenge and the ingenuity required to make it all work. (If you’re claustrophobic, you probably stopped reading this review as soon as you realized what the movie was about, but if you’re still here – yeah, it’s intense.) I could have done without the liberal use of re-enactments; towards the end, when The Rescue shows us a diver struggling to keep his young charge alive while talking about how utterly alone they both were, re-creating that moment for a camera that couldn’t have been present feels almost obnoxious – but that’s a minor knock against an otherwise brilliantly orchestrated film. 114 min. Some subtitles. Now playing at the Hot Docs Ted Rogers Cinema. NNNN (NW)

Events Transpiring Before, During, And After A High School Basketball Game

Not a lot happens in Events Transpiring Before…, really. There’s a basketball game, obviously, but the movie isn’t really interested in whether the Middleview Ducks are going to win this one; the game is just a draw for all the weirdos in the building. There are a lot of them. Some of them are grown-ups, like the referee (Jay Morberg) who’s distracted by the fact that he’s brought a small dog to the game, or the assistant coach (Andrew Phung), who is bursting with ingenious plays and strategies that he cannot articulate in any coherent manner. And some of them are kids, like the theatre group that’s planning to crash the game with a protest over their cancelled production of King Lear but keeps getting sidetracked over the nature of that protest. (Should there be signs? Should there be nudity? Isn’t the gymnasium kind of cold?) The basketball team has its share of oddballs, too, and eventually all of their stories bounce off each other. It’s a gentle kind of chaos, and writer/director Stenson shoots it all in long, contemplative takes, as though if we watch these characters long enough they might suddenly start making sense. They do not, but the protracted shots become their own running gag, prepping us to look for the next bit of foolishness barging into the frame. 75 min. Now available on VOD platforms. NNNN (NW)

Events Transpiring Before, During and After a High School Basketball Game

The Year Of The Everlasting Storm

October is heaving with horror festivals, and this one – taking place in the Eyesore Cinema theatre (1176 Bloor West) – is screening an international selection of features and shorts, including a Women In Horror short-film program (Saturday, 6:30 pm) and the closing-night feature Were-Wool (Saturday, 9 pm), from Ontario filmmaker Lucas Birnie. And yes, that one’s about exactly what you think it’s about.

It’s October, so of course we’re going to spotlight this lustrous act of creature-feature resurrection – even if it’s nowhere near as complete as it should be. This boxed set collects four of Universal’s greatest monster movies – Tod Browning’s Dracula, James Whale’s Frankenstein and The Invisible Man and George Waggner’s The Wolf Man – and delivers them in near-pristine Ultra High Definition masters in all their black-and-white glory.

Ninety years after their arrival, Dracula and Frankenstein are still wonderful experiences; it’s still amazing that Frankenstein – with its adventurous camerawork and arch performances – arrived just four years into the sound era. (Browning’s Dracula feels much older, though that’s probably got more to do with its stage origins and the more deliberate pacing; the Spanish-language version, shot on the same sets with a different cast and crew, has a livelier vibe – and it’s also included here in 4K.) The Wolf Man and The Invisible Man are perhaps less iconic, but still very entertaining, thanks to Lon Chaney Jr’s misery as the poor, doomed Laurence Talbot and the glee with which Claude Rains’s transparent maniac romps around soundstages in Whale’s other landmark monster movie, which is somehow even more fun when you can just glimpse the mechanics of the invisibility effects.

Universal’s boxed set includes 4K and Blu-ray discs for each feature, with all the supplements produced for previous editions ported over to both formats – audio commentaries, documentaries, retrospectives, even the alternate Philip Glass score for Browning’s Dracula commissioned by Universal and recorded by the Kronos Quartet in in 1998.

It’s a bit annoying that Universal’s love of four-packs means it’ll likely be another year before the equally essential quartet of The Mummy, The Bride Of Frankenstein, The Creature From The Black Lagoon and The Phantom Of The Opera make it to UHD, but if there’s one thing these monsters are good at, it’s waiting in the darkness. They’ll slither out eventually.