Where to watch outdoor movies in Toronto in summer 2019

Sail-In Cinema may have called it quits, but there are plenty of other spots to spend an evening with a blanket, some popcorn and a free movie 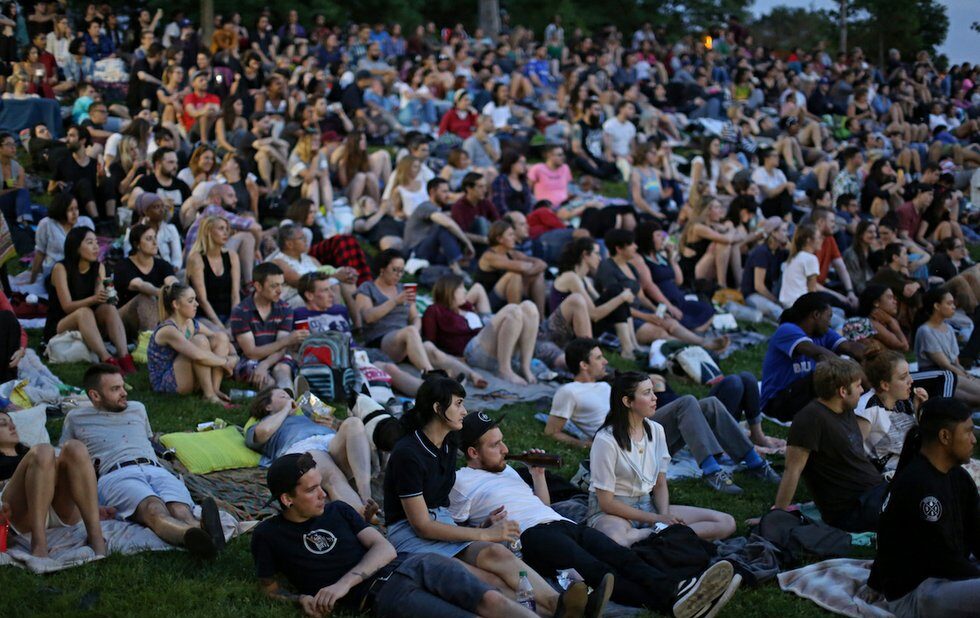 The theme for this year’s program is Dynamic Duos, spotlighting great on-screen pairings throughout the decades and supporting each feature presentation with a short film. The series kicks off with Ridley Scott’s Thelma & Louise (June 15) and Rob Reiner’s Misery (June 16) at Fort York, then moves to Sundays at Christie Pits for a mix of contemporary and classic films, including a Pride Month presentation of the recent TIFF hit Rafiki (June 30), Howard Hawks’s classic comedy His Girl Friday (July 7), Bruce McDonald’s Weirdos (July 14), Ang Lee’s Sense And Sensibility (August 4), Andrew Niccol’s Gattaca (August 24) and a screening of The Talented Mr. Ripley to wrap it all up August 25.

June 15 and 16 at Fort York, and Sundays from June 30 to August 25 at Christie Pits. Free/PWYC. christiepitsff.com

The fine folks at Toronto Outdoor Picture Show are once again supplementing their Sunday screenings at Christie Pits with Thursday night screenings elsewhere in town – all offering different movies, but all operating on the theme of Dynamic Duos. In July, Corktown Common Park gets Steven Spielberg’s classic E.T. The Extra-Terrestrial (July 4), continuing with Taika Waititi’s Hunt For The Wilderpeople (July 11) and Peter Bogdanovich’s charming Paper Moon (July 18) and wrapping up with Billy Wilder’s Some Like It Hot (July 25), each accompanied by a short film.

Toronto Outdoor Picture Show’s Dynamic Duos Thursday thing moves to Bell Manor Park in August, screening Brad Bird’s Ratatouille (August 8), Nora Ephron’s You’ve Got Mail (August 15) and Charlie Chaplin’s The Kid (August 22), each with a short film. All screenings are BYOBlanket, which is a neat term people should use more at these things.

Residents of Roncy and the Junction can enjoy monthly movie nights with beloved classics: Back To The Future (June 22), Casablanca (July 27) and a “Crazy For Swayze” double-bill of Dirty Dancing and Ghost (August 24). A fall screening of The Iron Giant (September 28) will also serve as a fundraiser for Charles G. Williams Park, so that’s nice.

This year, Yonge-Dundas Square’s summer screening series partners with The Second City to screen movies featuring legendary cast members from the Toronto and Chicago companies – and each film will be preceded by a live improv set from current Toronto players.

The St. Lawrence Market Neighbourhood BIA is offering summer screenings on two Thursdays, in two different locations. On June 27, St. James Cathedral hosts a yet-to-be-named Buster Keaton silent film, with live piano accompaniment by jazz pianist Fern Lindzon on July 25, Spider-Man: Into The Spider-Verse will screen in Parliament Square Park. That one has its own music.

Liberty Village Movies In The Park

The Liberty Village Residents’ Association is holding free monthly movie screenings all summer in Liberty Village Park, so bring a blanket, grab a drink at one of the dozen nearby coffee shops and settle down with Captain Marvel on June 21, Ferris Bueller’s Day Off on July 19 and Mary Poppins Returns on August 23.

Under The Stars: Regent Park

Wednesday nights at Regent Park offer an impressively diverse slate, in terms of both representation and genre: the series opens with Spider-Man: Into The Spider-Verse (July 10) and closes with Black Panther (August 14), offering Mina Shum’s generational dramedy Meditation Park (July 17), Alanis Obomsawin’s moving documentary Our People Will Be Healed (July 24), Ang Lee’s lush Life Of Pi (July 31) and Makoto Shinkai’s animated drama Your Name (August 7) in between. And this year the Taste Of Regent Park community market will be just across the green like a great big snack bar.

The 10th anniversary season of the outdoor movies-and-music festival – once again setting itself up at 181 Sterling in the Junction, across from MOCA – kicks off with Jordan Peele’s Us on June 19, preceded by a live performance from Yuka. Other pairings this summer include Joyia and Harmony Korine’s The Beach Bum (June 26), Sam Polley & The Old Tomorrows and Jasmin Mozzafari’s Firecrackers (July 3), Father Christmas and Fredrik Gertten’s acclaimed housing documentary Push (July 24) and Ghost Cavern opening for the Seth Rogen/Charlize Theron political romcom Long Shot (July 31). Food trucks and beer vendors will be steps away.