Why I hate Vin Diesel

Unlike the self-deprecating Rock, the grumbling, humourless Fate Of The Furious star taps into an old-school chauvinism 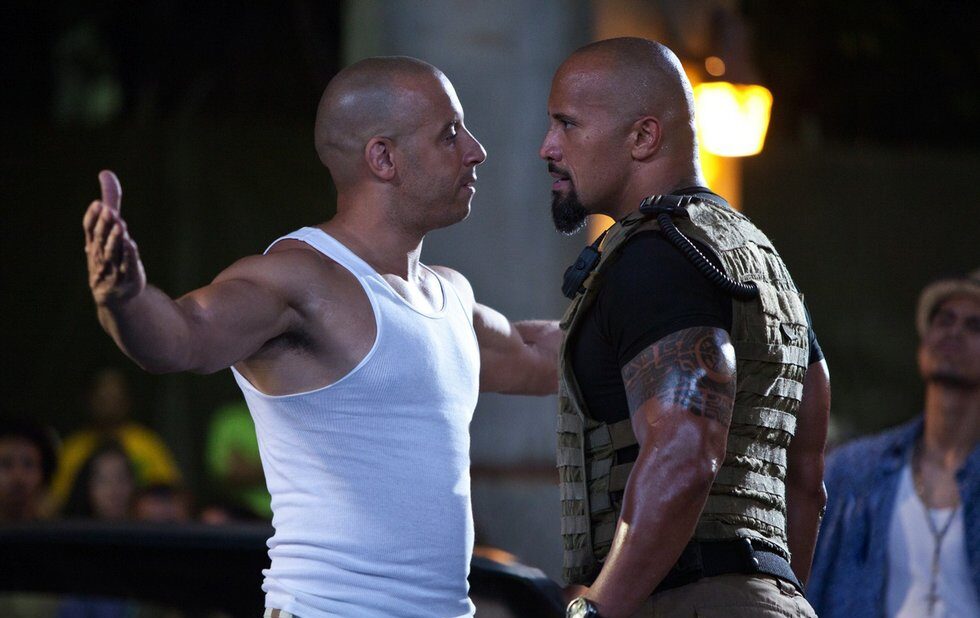 The grumbling one-note actor is on his eighth lap as Dominic Toretto, the character who made him a star, in The Fate Of The Furious, which opens this week.

Diesel, who at times looks like plucked poultry injected with steroids, always strikes me as charmless and backward.

Of course, I’m in the minority.

No best wishes from Dwayne Johnson, though. Instead, The Rock waited a week before going on Instagram and issuing a cryptic diss that was later revealed to be directed at Diesel. Johnson praised the production’s cast and crew while referring to Diesel as “chicken shit” and a candy-ass who gets his blood boiling.

Perhaps Diesel and Johnson were bound to wind up at each other’s throats.

These are our two biggest successors to the hulking action stars of the 1980s. Think Schwarzenegger and Stallone, who took shots at each other in the press and in their movies.

But while Stallone and Schwarzenegger hated each other from a distance, Diesel and Johnson’s beef has arisen from too much time at close quarters. Sources told Page Six that Johnson’s irritation stemmed from Diesel’s regularly holding up production by showing up late or refusing to work. Similar reports came out of the Furious 7 production.

Much of this is gossip, but if you need evidence of Diesel’s lack of professionalism, check out the interview he gave Brazilian YouTube personality Carol Moreira (below), when he repeatedly interrupted her questions because hitting on her seemed like more fun.

“I love you,” he groans during one of many interruptions. “I love her, man. She’s so fucking sexy. I can’t do this interview. Look at her.”

Reports from the Furious set also describe Diesel as a “diva,” an unverifiable but logical characterization. Just watch the Fast & Furious movies for proof.

Consider how Diesel, enjoying producer status in a franchise revved to stroke his ego, is consistently positioned as the centre of gravity. His character, Dominic, is the leader among outlaws turned globe-saving spies. And the leader can never be outshone when it comes to street racing and smackdowns.

Diesel seems oblivious to the fact that he’s actually the weakest link in the Furious ensemble – or the “family” as he repeatedly, momentously mutters without irony.

His character may be the foundation the franchise was built on, but it has since become airborne, embracing Bond-like antics and diverse casting.

Fast Five, the best in the series, reworked the chemistry by cherry-picking a charismatic team of wisecracking carjackers and giving them room to cut loose. It ended up doubling its predecessor at the global box office and turning the franchise into heavy-hitter tent pole fare. That was the movie that united the rascally charms of Tyrese and Ludacris and introduced Johnson as special agent Luke Hobbs. They bounced smack-talking zingers off each other in light-hearted bits that Johnson is far better equipped to handle than Diesel.

Johnson recognizes that his absurdly large physique should be played for comedy. Like the Furious movies he’s a part of, he lunges with complete commitment into action scenes that defy physics and monologues overloaded with testosterone. But he can give a knowing wink, too, agreeing with the audience about how ridiculous it all is.

That balance – a self-deprecating chuckle that isn’t allowed to compromise the moment – has been key to Johnson’s best performances in movies like Pain & Gain and The Other Guys.

His appeal is old-school chauvinistic, like his behaviour with Moreira. And it’s coupled with a tough-guy act that belongs in a VOD dump next to Steven Seagal’s latest.

As enjoyable as the Furious franchise has become, it drags whenever it switches to Diesel.