Rough Night is a raunchy ensemble comedy about a bachelorette weekend in Miami that goes horribly awry when the women. 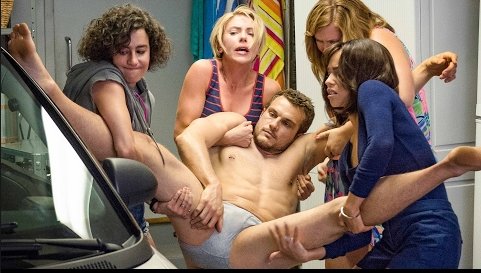 Instead of giving the dead stripper plot a feminist twist

Rough Night is a raunchy ensemble comedy about a bachelorette weekend in Miami that goes horribly awry when the women accidentally kill a male stripper. Murders of prostitutes and strippers have fuelled the plots of movies since The Godfather Part II in 1974, and their corpses have provided fodder for comedy in Very Bad Things, Dirty Work, Tropic Thunder and Jay And Silent Bob Strike Back.

You cant turn on the TV without seeing a dead prostitute or stripper on police procedurals or jokes about them on sitcoms. On 30 Rock, Jack Donaghy, mourning the change in GE ownership, muses, This is where we used to hold retirement parties. The balcony below is probably still littered with stripper bones. On Family Guy, Peter Griffin says, But Ill tell you whats not cool: killing strippers. Besides, theres no reason to kill them, cuz most of them are already dead inside.

Strippers and prostitutes die so often onscreen that disposable sex workers have their own entry on tvtropes.org.

These jokes arent innocent. Sex workers fall victim to violent crime more often than most, and stigmatization only increases their risk of violence.

As a stripper, Ive gotten used to seeing characters who do my job maimed and killed for laughs. A self-proclaimed feminist like Tina Fey is as likely to write these jokes as a rape-joke proponent like Seth McFarlane.

So why exactly is Hollywood marketing Rough Night as a feminist film? Since womens oppression has involved placing the desires of men and children before our own, the movies present the things we do for fun for us as emancipatory, expressions of agency on the path to liberation.

And while a gaggle of women let loose in Bridesmaids, Bad Moms and Neighbors 2: Sorority Rising, Rough Night is the first of these comedies co-written and directed by a woman.

But feminist director Lucia Aniellos film seems to have this to say about womens desires: bourgeois women are so alienated from authentic experience they need to accidentally kill a stripper to get real with each other.

The boring bride, Jess (Scarlett Johansson) her college friends jealous shrew Alice (Jillian Bell), slacker activist Frankie (Ilana Glazer), businesswoman Blair (Zoe Kravitz) and kooky Australian Pippa (Kate McKinnon) from Jesss study abroad all feel badly about killing the stripper. But activist Frankie reminds them that theyre in Florida, where Marissa Alexander was sentenced to 20 years in prison for firing a warning shot at her abusive husband a sentence the Black Lives Matter activists cited tirelessly as an instance of unequal justice and helped her to appeal.

A wasted white lady killing a male stripper with her sexual enthusiasm is in no way like a poor Black woman defending herself from intimate-partner violence, but this is the #woke false equivalency of Rough Night.

Activist callouts are not the only false note. The cast struggles to cover up the accident, hiding the dead strippers eyes behind penis sunglasses, then his body in the sex swing in the closet. These naughty sight gags feel endless, and none got a laugh at the screening I attended.

When the girls dispose of the corpse, they agree to say a few words. Alice offers that he might have been a scientist or something, and Jess interrupts, Its nice of you to say that.

Their smugness soon puts an end to any feelings for him, so instead they feel sorry for themselves, vowing to be better. This catharsis allows the girls to address failings in their friendship… so theres that.

Rough Nights co-writer, Paul Downs, plays Jesss fiance, and his milquetoast wine-tasting bachelor party hammers home the gender flip. If women behaving badly is a stand-in for equality in Hollywood feminism, men have to be boring and needy. Why? Because in the war of the sexes, fun is a zero sum game.

When the thriller plot kicks in, Frankie knocks a guy she thinks is a cop unconscious and defends her actions by saying, He could be a Daniel Holtzclaw.

Holtzclaw is the white Oklahoma City police officer who stalked and raped 13 Black women (a number of them sex workers) while on the job another trial that Black Lives Matter activists brought to the public consciousness.

This scene, and the cognitive dissonance it engenders, is exactly what bourgeois feminism (also known as white feminism) looks like: the fears of privileged women are more important than the real experiences of other less privileged people, or their bodies.

Holtzclaw never raped a rich white girl in a glass house on Miami beach, but even in jail he provides a good enough excuse for one such girl to assault someone (of course, accidentally). Because white feminists are fragile and know not what they do.

We could view Rough Night as a clueless take on the film Get Out, one about strippers bodies as props or proxies or fetish objects anything but attached to a brain stem.

Instead of horror, its a comedy because our POV is the bougie bridal party who are thrilled get away with accidental manslaughter and are now less panicked about marriage.

Theres nothing like the threat of incarceration to put that institution in perspective.

I initially chalked up the films flaws to failed irony and a race to the bottom with gross sight gags. Then I came across Aniellos remarks about the film.

Maybe part of what feels R about it is that its like R for realistic,” she said. “Hyper-realistic women. Maybe thats the thing that is most shocking.

If the real women she knows in Hollywood think the disposable sex worker trope is LOLz and Black Lives Matter is all about them, then Im glad I work in a strip club and not a writers room.

Brigitte Benoit is the pseudonym of a writer, translator and stripper.