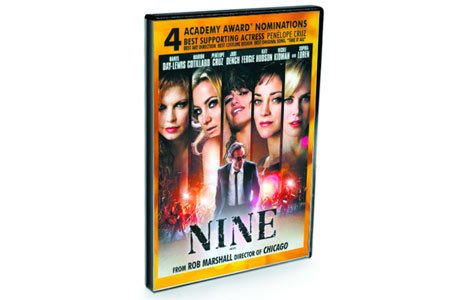 As a display of brilliant acting, Nine is fine. Daniel Day-Lewis brings quicksilver mood shifts, humour and physical grace to Guido Contini, self-centred Italian film director whose life is crashing because he’s slated to start shooting in 10 days and can’t come up with a script.

The movie really belongs to the women – Marion Cotillard, Guido’s wife Penélope Cruz, his mistress Judi Dench, his confidant Nicole Kidman, his movie star the incomparable and still radiant Sophia Loren, his mother Kate Hudson, a Vogue writer who wants to get laid and Fergie, a hooker. They get strong emotional moments and the better songs.

As a musical based on Fellini’s 8½, it’s not much. The songs are few, unmemorable and feel half-written. The dances are cut fast, so we seldom get a good look at the moves. It’s handsomely mounted, though.

The making-of docs explore the choreography and production design.