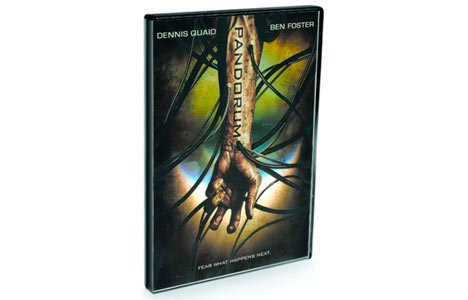 Pandorum suffers a little, but only a little, from the Dark City problem. That is, you’re spoon-fed a little too much information up front for the story to be as engrossing as it could be. If you’ve seen both the theatrical version and the director’s cut of Dark City, where the matter gets fixed, you’ll know what I mean.

Corporal Bower (Ben Foster) and Lieutenant Payton (Dennis Quaid) awaken disoriented, suffering memory loss and trapped in a little chamber. They know they’re on a starship and that something has gone horribly wrong, but can’t remember their mission.

Director Christian Alvart makes good use of his spectacular sets and hard-edged action, but he keeps the story firmly focused on the people, getting intense, realistic performances from his cast, who skip the heroic posturing to concentrate on fear, determination and intelligence.

Alvart and producer Jeremy Bolt provide a thoughtful commentary that covers, among other things, writing and casting, with a few remarks on the importance of distributors to the latter.