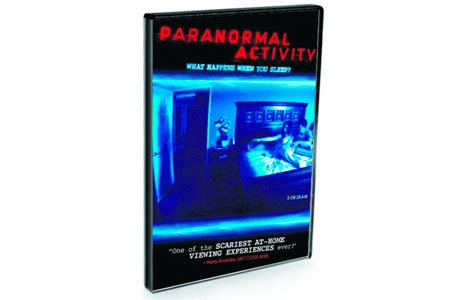 Paranormal Activity delivers an effective kick and a lingering sense of unease, but if you’re screaming early on, it’s likely from boredom. The movie goes for the slow build, so nothing much happens in the first half but bumps in the night and establishing Katie and Micah’s relationship.

Something from beyond is haunting Katie, and boyfriend Micah, not at all scared, wants to investigate with his brand-new video camera. What the camera sees is what we get – namely, the interior of their small suburban house. Thus the classic Blair Witch/Cloverdale downside (crappy camera work) and upside (a believable sense of reality).

That realism is enhanced by the naturalistic performances of Katie Featherston and Micah Sloat, whose relationship allows the movie to make a strong unstated case for Katie as the unconscious source of the supernatural nastiness and Micah its unwitting amplifier.

The alternate ending in the extras is just as effective as the main climax and well worth checking out.