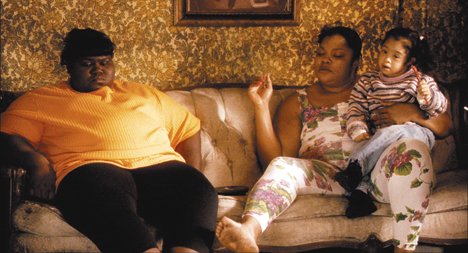 The backlash from black commentators against Precious: Based On The novel Push By Sapphire is getting hot and heavy.

Both Armond White and Anthony Smith are totally vicious on the subject, accusing director Lee Daniels and his influential executive producers Oprah Winfrey and Tyler Perry with pandering, promoting racial stereotypes and using the film to assuage their own black guilt.

I, too, was a little miffed when, at the TIFF press conference, a black journalist asked the question outright. Are you worried, he asked, that this movie will reflect badly on the black community?

Oh no, said Daniels, whose liberal bravado was echoed by Winfrey and Perry. This is a universal story.

Ridiculous, I thought, and took Daniels on about it during a round table with him the next day. It’s a black story, I argued, like the Coen Brothers’ A Serious Man is a Jewish story. Check out the exchange.

But I’m not buying the arguments of White and Smith, either. Precious is not a story about all blacks, it’s the story of one girl. Yes, it’s also a story about poverty but poverty has an impact on inner city blacks in particular ways. And well-placed writers of colour cannot deny that.

I also think that White and and Smith are plain wrong about specific things. White says the fantasy sequences are egregious exercises in pathos, which shows me he knows next to nothing about narrative or sexual abuse, for that matter. From the point of view of story, the fantasy sequences in Precious are required to lighten the intensely heavy tone. More important, they are absolutely accurate portrayals of what happens to women and girls while they’re being abused. They disassociate. Screenwriter Geoffrey Fletcher – not coincidentally a psychology graduate – knows it.

I realize that I write this as a white woman but I’m trying to see White and Armond’s point of view with a lesbian lens. Personally, I can’t tolerate another tale of predatory, pathetic and repressed older lesbians chasing after young women (The Killing Of Sister George, Notes On A Scandal).

I, too, have grown tired of sexually abused women’s sad coming out stories (too many to mention). But I say that because there are simply so few lesbian-positive stories out there, period.

Smith talks a as if American culture hasn’t grown up enough to do anything but interpret Precious as a damnation of all blacks. (That, by the way, is what black commentators said about The Colour Purple, too.)

In saying so, he understimates the impact of blacks on pop culture in general. We live in a culture that gave us The Bill Cosby Show, a TV sitcom that, at the time also took heat -for being too middle class. Beyonce’s one of the biggest star’s on the planet. Eddie Murphy still has box office mojo. TV prime time series – about lawyers and doctors – can’t get away without at least one black face among the regulars.

Precious is not the face of all blacks – she’s one face, poor, abused, strong and real. [rssbreak]