NOW MagazineMovies & TVNews & FeaturesPieces Of A Woman: Midwives on the accuracy of the home birth scene

Pieces Of A Woman: Midwives on the accuracy of the home birth scene 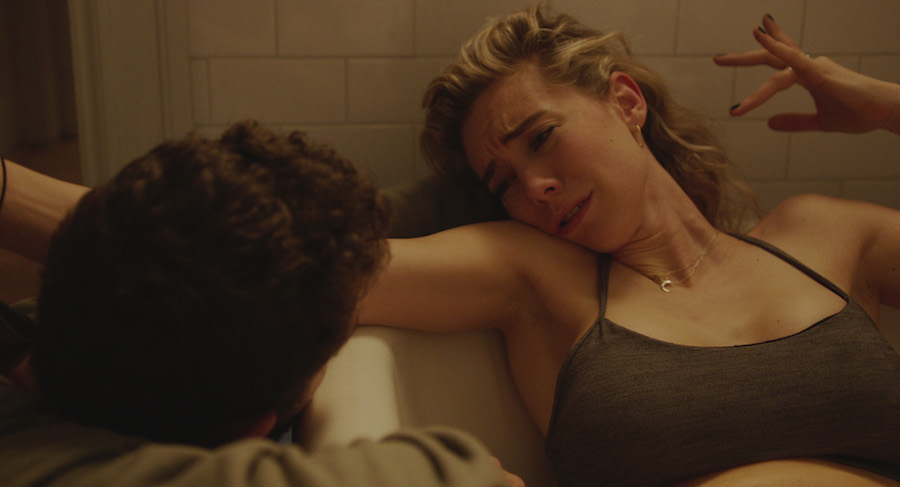 During the pandemic, midwife associations in Canada have reported an uptick in interest in home births among parents who want to avoid the hospital system.

Some of these parents-to-be may also be sitting at home watching Netflix and come across Hungarian filmmaker Kornél Mundruczó’s Pieces Of A Woman, about a Boston couple (Vanessa Kirby and Shia LaBeouf) grieving a childbirth-related loss. The movie opens with a 30-minute home birth scene that sets up its story.

Mundruczó and screenwriter Kata Weber have said the movie is a fictionalized account of their own experiences. It’s also partially based on the case of a well-known midwife activist in Hungary, where the profession only became legal in 2010.

Though research has shown home births for women with low-risk pregnancies are as safe as delivering in the hospital, misconceptions and stereotypes remain around the process. That could be due to dramatic portrayals of pregnancy and childbirth in television and movies.

Giving birth can be a long, undramatic and highly unglamorous process, thus movies and TV have a long history of upping the dramatic tension in pregnancy stories. On top of that, there’s a lack of knowledge in the general public around midwifery, a profession once derided as folk medicine that has been regulated in Ontario since 1994. (It’s also covered under OHIP.)

Midwives are health-care professionals but in the movies they are often portrayed as zenned-out witches with Mennonite hair. In fact, it’s a job that requires skills, strength and extensive training, which you may not grasp from watching Pieces of A Woman.

After watching the film, we spoke with Toronto-based registered midwife and educator Manavi Handa and British Columbia-based registered midwife Hana Lang to discuss the ways midwives and pregnancy are portrayed in pop culture, misconceptions around home births and taboos around childbirth-related loss. They explain what the movie gets right and what it gets wrong.

Watch the entire conversation in the video or read condensed and edited excerpts below.

NOW: For a lot of people, pop culture representations of pregnancy, childbirth and midwives is their exposure to midwifery. They don’t know a lot about the process, especially in North America. In the UK and in the Netherlands, maybe 80 per cent of childbirths are performed by midwives. But the number is way lower in North America and in Ontario.

Manavi Handa: In Ontario now we’re at around 15 per cent of all births.

NOW: What is a midwife and why are there so many misconceptions around what a midwife does?

MH: Canada was the last G7 countries to legalize midwifery. It’s only been legal here for almost 25 years. And we’re now doing around 15 per cent of births in Ontario. And in BC it’s 20 per cent. When I started practising, there were 80 registered midwives in the province. Now we’re almost at a thousand registered midwives in the province. It’s not like the last 20 years it’s been as popular and as common as it is now.

People have a dated idea of what a midwife is and does. The midwives who used to practice before legislation only were able to do home birth. There wasn’t regulation, so they had different levels of education and different levels of equipment. We also have to remember that in medicine there was a very well thought out plan to eradicate midwives. This is a few decades ago. Part of that plan was to say that midwives were uneducated and to say that home birth was unsafe.

Three tropes about midwives are still prevalent: the witch midwife, the hippie midwife or the lay village midwife.

Lots of people don’t realize that we’re covered by the government. In BC and in Ontario, if you have a midwife you don’t have to pay. It’s a four-year university program. In general terms, we do anything that a family doctor used to do in terms of birth. Family doctors have left obstetrics in droves. So we’ve filled that niche of lower risk, normal and healthy pregnancies and births.

We order all the tests, prescribe medications, everything from the very beginning of pregnancy until six to eight weeks postpartum. That also includes ordering all routine tests for the baby.

How are midwives generally represented in pop culture?

MH: There are certain tropes about midwives and clients. It’s always middle-upper class white clients. They never show any diversity. And the midwife is also always white. They never show that there are midwives like me who can be brown.

But in [Pieces Of A Woman], there were three pieces of equipment that the midwife had. She had a stethoscope. She had a doppler to listen to the baby, which she didn’t really use that much. And blankets.

We carry the equivalent of a level-one hospital of equipment with us: anything and everything you would need up to the point of a cesarean section or a vacuum or forceps. We can prep someone for C-section en route to the hospital. We have IV equipment, oxygen and very extensive training in neonatal resuscitation. We can assist at a Caesarean section. Our skills are much beyond what is ever shown.

When the baby stops breathing in the movie, she’s just like, “please, baby, breathe.” It just makes it sound like we’re praying to the universe and have no skill to actually help the baby start breathing.

Hana Lang: It made me anxious in the movie when she arrived and I was like, “Where’s your equipment? Where are you going to set up for recess?” If that baby comes out and needs help, it’s not going to work if [all your equipment is] in your bag.

NOW: Do you find that media representations influence parents-to-be?

HL: There’s a general lack of awareness around what our scope is as the midwife. The paramedic at the hospital the other day called me a doula. That’s definitely something we’re working against. Folks that have had experience with midwives, talk about their midwives to their friends and to their family. I would say that word of mouth is typically how most people come into midwifery care because the level of care that we provide is just so good.

In Ontario, there are three pillars of midwifery care philosophy. Continuity of care: You will have met your midwife before you go into labour, hopefully more than once. Informed choice: One of the things in the movie that really bothered me was the lack of consent with a couple of the vaginal exams. And choice of birth place. Because of those three pillars, we’ve designed a system that serves women really, really well. And people talk.

NOW: Speaking of choice of birth place, there’s this contentious scene toward the end of the film in the court room. The lawyer puts the mother on the stand and says you refused to go to the hospital when your midwife recommended it. How common is that?

Hana Lang: One of the big things about midwifery care in Canada is that midwives deliver babies in the hospital and at home. Your midwife would be admitting you into the hospital and following you throughout the care if there was an emergency.

Based on the research and evidence, home birth is a safe and responsible choice. The Association of Ontario Midwives (AOM) have some really good documents available for the public that outline the extensive research on outcomes. What we know is that with a midwife, outcomes at home and the hospital are the same. People’s experience of home birth generally are more positive than in the hospital.

MH: We have really good evidence supporting the safety of home birth. And part of that is we don’t stay home when there’s an emergency. One of the things that really bothered me in this movie is this trope of the unreasonable, selfish woman who’s having a home birth at all costs and not thinking primarily of their baby. That is so rare that I would say in 20 years, I’ve come across that a couple times. And usually it’s when you’re also dealing with mental health issues or extreme trauma around the hospital. Even then you wouldn’t have someone refuse. You would just talk about it more.

This idea of the woman who’s like, “No, I’m staying home no matter what happens” reinforces that idea that to have a home birth, you’re inherently selfish. You’re not primarily concerned about your baby. You’re doing it because you’re only thinking about your own experience and you’re not that concerned about your baby. And then look what happens. You get punished and your baby dies. At the end of the day, everybody’s primary concern is the health of their baby. People are in favour of having healthy babies.

HL: In the movie, the birth could have happened in the hospital. People make those choices in the hospital, too. [The filmmakers] would have been able to explore the same themes of autonomy and choice and forgiveness and guilt. The birth happened at home probably to make it a little bit more dramatic and get people talking about it.

MH: The movie is about childbirth-related loss, and how much of a strain it puts on the family unit and how different people respond differently. We often think of grief, in some movies, like a bonding thing. Everyone’s going through the same thing at the same time. But grief often doesn’t play out that way. Everybody’s going through their own pain and have a really hard time supporting each other. I think they did a really good job of showing how much it affects the couple’s relationship. Even things like having sex when you have a childbirth-related loss becomes very loaded because it’s associated in a way. I think they did that part well. I almost felt like the home birth idea detracted from all of that. They were grieving about “the mistake” of a home birth versus grieving the very real loss of a child.

For information and support on childbirth-related loss, contact the Pregnancy and Infant Loss Network.