Old classics are returning to the streamers: a new take on Cinderella called Sneakerella co-starring Brantford’s Devyn Nekoda arrives on Disney+ while the Kids in the Hall bring a new season to Prime Video Canada.

(01:00) Sneakerella is a gender-flipped remix shot in and around Hamilton, Ontario, where the glass slippers are replaced with fancy kicks. The movie stars Lexi Underwood as the heir to a sneaker empire, Chosen Jacobs as a sneaker designer who catches her eye, and Brantford, Ontario’s Nekoda as his best friend. You may have seen Nekoda before on Backstage, Ginny & Georgia and Utopia Falls. She is electric in this movie and joins the NOW What podcast (01:00) to discuss adapting a classic and how we could possibly realize the dream of seeing a great Toronto dance movie.

(19:53)The Kids in the Hall are the 40-year-old comedy troupe who started out performing sketches at the Rivoli before SNL producer Lorne Michaels developed their series for CBC and HBO, producing five seasons that aired from 1990 to 1995. They went on to draw in more fans through reruns on Comedy Central.

The Kids in the Hall are enjoying a victory lap with a new season that dusts off some 80s material and tries to figure out how their comedy settles in today, between conversations on gender parity (a challenge for a show that centres five white guys) and toxic masculinity (not so much a challenge since they were well ahead of the curve on that).

There are also groan-worthy bits where the Kids in the Hall (whose original series resorted to blackface on more than one occasion) prod at the sensitivity around cultural appropriation and racism. Attempts at diversifying the supporting cast also land awkwardly. There’s a neighbourhood watch sketch where the guys go Travis Bickle in a low-rise apartment complex near Kennedy and Eglinton (where few if any white people live). It’s a toothless attempt at mocking their own whiteness.

But there are also touching and melancholic notes, as when Scott Thompson’s fabulously gay Buddy Cole runs into an old glory hole he was once intimately acquainted with relocated to a Toronto construction site and tries to find it an appropriate final resting pace. At a time when Toronto’s gay village is being torn up by condo developments, the sketch hits a poignant note. The Kids in the Hall aren’t the only ones struggling to find a place where they still belong. So too is the community that felt represented by Thompson’s openly gay characters, who are celebrated as revolutionary for that era in television.

Have a listen to both conversations on Apple Podcasts and Spotify or playable directly below. 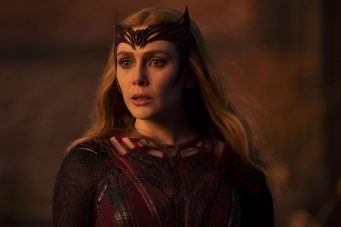 Review: The new Doctor Strange is a maddening slog through the multiverse