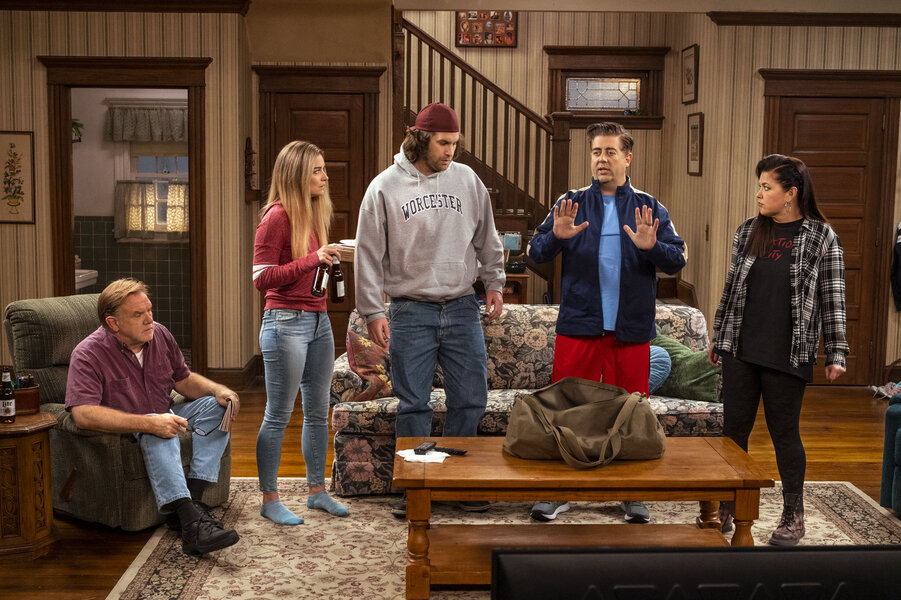 Kevin Can F**k Himself has a couple of things going for it. The first is that it’s built around Annie Murphy, fresh from her Emmy-winning run as Schitt’s Creek’s overenthusiastic Alexis Rose and clearly ready to do something radically different. The second is that it is, somehow, a mashup of The King Of Queens and Breaking Bad, centred on a stereotypical Hot Sitcom Wife who suddenly realizes she’s wasted a decade on her self-absorbed man-child husband and embarks on a scheme to emancipate herself.

Murphy plays Allison, the unfailingly supportive and even indulgent life partner of Kevin McRoberts (Eric Petersen), a working-class idiot who spends most of his time running around their Massachusetts town insulting his friends, squabbling with his neighbours and mounting get-rich-quick schemes that never pay off. Allison isn’t stuck at home – she has a job at the package store – but it’s clear she’s not living up to her potential. And when she’s finally confronted with that truth, Allison has to do something about it.

Shifting between the overlit multi-camera setup of Kevin’s world and the muted, single-camera presentation of Allison’s reality whenever she goes out on her own, Kevin Can F**k Himself starts out as a grabber: Murphy is terrific in both modes, and it’s not long before we share her loathing of Petersen’s grasping, loutish Kevin and his decidedly one-dimensional crew, played by Brian Howe, Alex Bonifer and Mary Hollis Inboden. Inboden, at least, gets to reveal more sides to her surly-sidekick character as the show goes on, revealing honest-to-god layers in episodes 3 and 4… though it seems unlikely that anyone else will.

The inherent limitations of Kevin’s world is a problem that seems built into the series’ very DNA, and each new episode runs up against it. Exactly how aware is Allison of her situation? Kevin’s sitcom world comes with a laugh track and what appear to be commercial breaks; can she hear them? Does she have any agency within the show, or only once she’s out in her own narrative? Does she have any hope of breaking away from this toxic relationship, given that Kevin’s literal reality is one where he never suffers any real consequences for his selfish actions? And given the premise of Kevin Can F**k Himself, isn’t it impossible for her to get what she wants?

(I should acknowledge that I’m probably obsessing over this a lot more than most viewers will, but the show does invite this line of thought. Hell, I haven’t even gotten into the question of who is supposed to be watching The Kevin Show.)

In the first few episodes, Murphy makes it work, selling the shift between Show Allison’s exasperation and Outside Allison’s mounting desperation and misery, and finding little ways to show us they’re the same person. Her outsized comic reactions are as sharp as they were on Schitt’s Creek, but now they’re recontextualized in a way that invites us to see what’s going on underneath. Even more telling is the entirely different Allison we see when she runs into an old boyfriend (Made For Love’s Raymond Lee) who’s back in town and awfully happy to see her.

Whether the series can sustain the tension between the two worlds is another question; by the halfway point, it’s already struggling to balance the sympathetic struggles of Allison with Kevin’s increasingly repellent antics, and not always successfully. But Murphy is so watchable that I’m willing to stick with it.