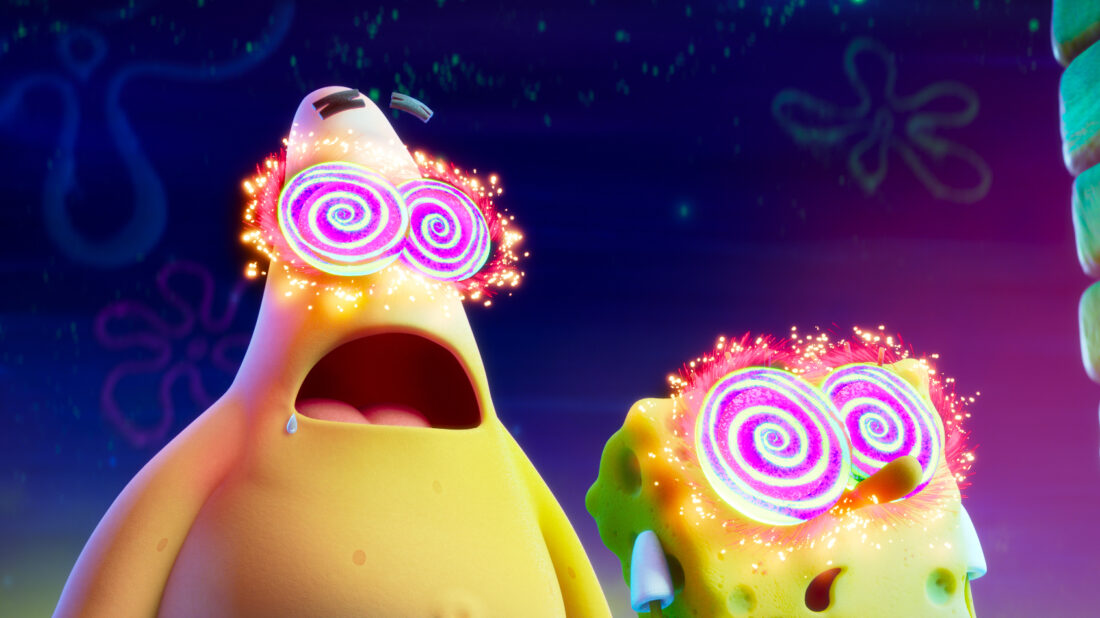 Patrick (voiced by Bill Fagerbakke) and SpongeBob (voiced by Tom Kenny) in THE SPONGEBOB MOVIE: SPONGE ON THE RUN.

The SpongeBob Movie leans in to the randomness. That has always been part of the charm when it comes to the series and the movie franchise it inspired. SpongeBob’s adventures are weird, trippy and vaporous. It’s the stuff that stoner dream are made of, and just as forgettable. But it’s also cute and polite enough for children.

The title character, voiced by Tom Kenny, flips burgers at the Krusty Krab diner in an underwater town called Bikini Bottom. He’s like animation’s answer to Steve Urkel, somehow simultaneously annoying and affable, with a maniacal laugh. You can’t help but enjoy just lazily hanging with him and his peculiar friends or frenemies like Plankton (Mr. Lawrence) and Sandy Cheeks (Carolyn Lawrence).

But there’s a fine line between lazily enjoying the randomness and randomness that ends up being lazy. And the new SpongeBob SquarePants movie, despite all its pleasures, falls into the latter category.

“I’m so confused,” said my 10-year-old, reacting to the movie’s strange distractions and delights while barely hanging onto the throwaway plot.

The first CGI-animated SpongeBob movie is ostensibly about a rescue mission. Poseidon (Matt Berry), the vain overlord of an underwater Atlantic City, kidnaps SpongeBob’s pet snail Gary. The snail’s slime keeps Poseidon’s skin young. SpongeBob abandons his duties at the Krusty Krab to get Gary back.

But on the way, SpongeBob runs into dancing zombies who are presided over by Snoop Dogg. Keanu Reeves shows up as a hallucinatory sage who appears to SpongeBob, Messiah-like, from a tumbleweed. Awkwafina is in the mix voicing an out-of-control robot.

Each of these things is enjoyable. But they don’t add up to anything.

Late in the game, the movie shifts gears into a SpongeBob origin story, revealing how the main character met each of his friends and revelling in what he means to them. But like everything else, these bits feel like an afterthought.

That kind of irreverence is admirable. But it can’t convince me to care.