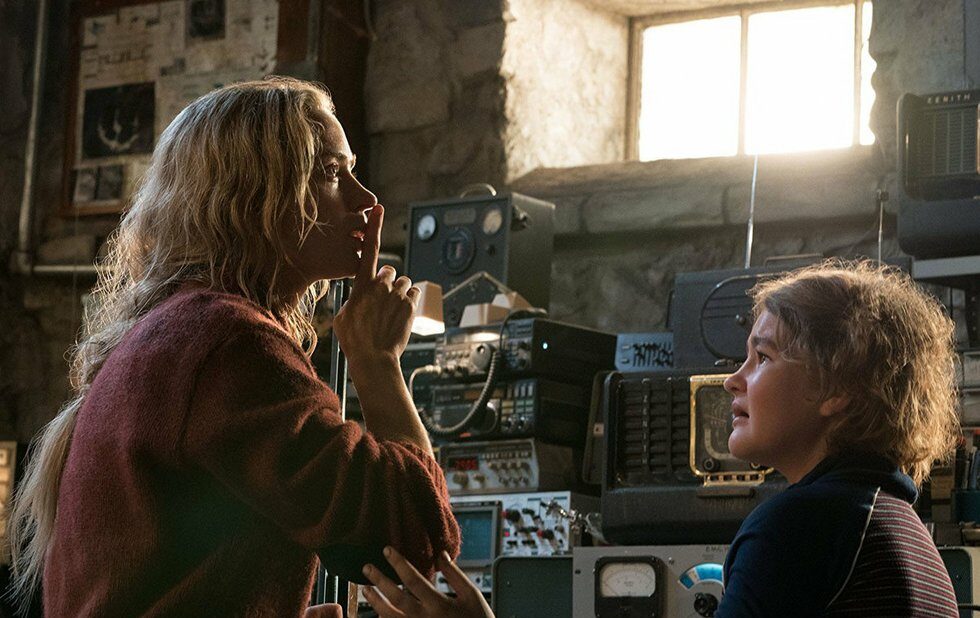 Emily Blunt and Millicent Simmonds in A Quiet Place (2018)

Set in the aftermath of an apocalypse wrought by carnivorous creatures of unspecified origin, A Quiet Place is mercifully short on exposition and long on muscular set-pieces.

To avoid being consumed by the creatures, who are blind but possess highly sensitive hearing, the farming family in this chamber horror film communicate through sign language and strive to be as hushed as possible. (They are the ideal cinema audience).

Father (John Krasinski) tinkers with various homemade devices in his workshop and takes the boy fishing, while Mother (Emily Blunt) cooks and prepares for the imminent arrival of a new baby, her very pregnant belly constituting the scariest image in a movie where silence equals survival. The family seems retrograde in its gender roles, though this will be reversed by the film’s end, when the deaf daughter (Wonderstruck’s Millicent Simmonds) proves both resourceful and courageous.

Written by Scott Beck and Bryan Woods and directed by Krasinski, there is no great genius at work in A Quiet Place. The core idea is a solid gimmick, the storytelling a distillation of familiar genre mechanics and the final revelation obvious.

The film’s effectiveness arises, rather, from the elimination of everything inessential and a steady focus on teamwork both on and off-screen. I only wish the filmmakers went all the way with the premise and nixed Marco Beltrami’s score for maximum quietude and creepiness.