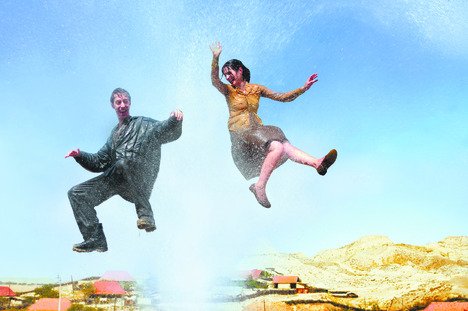 This variation on the myth of Lysistrata, when it’s not utterly charmless, is completely repulsive.[rssbreak]

The gods say teens Aya (Kristyna Malérová) and Temelko (Maximilian Mauff) can’t consummate their relationship until the stars are aligned. But just as that’s about to happen, the village’s water supply dries up and the men won’t do anything about it.

Aya and the rest of the village women declare a moratorium on sex until the water is restored.

Tonally, Absurdistan is a mess. As satire, it’s offensive, starting with the stereotypes – the guys, except for Temelko, are mostly fat, stupid and lazy, the women, except for Aya, are fat and slovenly. Set in Nowheresville, somewhere in Central Asia, Absurdistan is not Borat funny.

It has elements of magic realism – the town has no children, a prostitute travelling from village to village gives Temelko the key to the water problem – but director Veit Helmer hasn’t a scintilla of imagination.

And, except for the fact that Aya and Temelko eventually do experience their sexual initiation – no spoiler here, you can see it coming a mile away – nothing except for the water situation changes.

Happy ending? Not if the village is right back in the same ignorant place it was when we first encountered it.