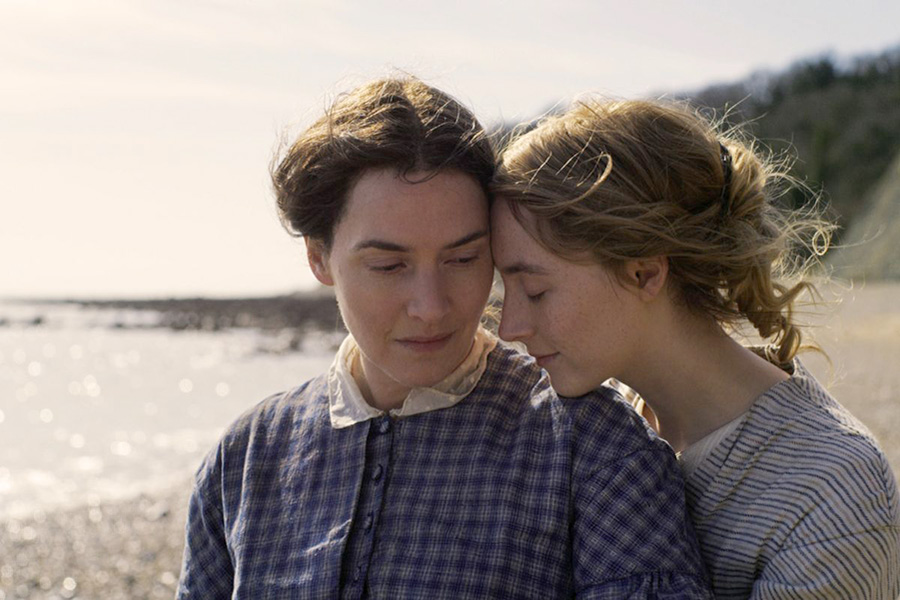 I had pretty high expectations for Ammonite, because I was so affected by writer/director Francis Lee’s remarkable first feature God’s Own Country. A film about two men who fall in love while working together on a Yorkshire sheep farm, it drew some obvious comparisons to Brokeback Mountain – but transcended the parallels to its predecessor with a rougher, more contemporary aesthetic and an undercurrent of hope. It told a very different story from Ang Lee’s pristine tragedy, and three years later I’m still haunted by it.

And now here is Ammonite, which carries its own echoes of another film; although it was in production before Céline Sciamma’s Portrait Of A Lady On Fire premiered at Cannes, there are some superficial resemblances: Both films are period pieces about two women who fall for one another in an unforgiving seaside location.

But the differences are in the execution, and Ammonite stands entirely apart from Sciamma’s masterpiece. It plays as an elegant mirror image of God’s Own Country, telling the same story as its predecessor – which is fascinating on a textual level – but changing the genders of the lovers and the world in which they exist.

And because those lovers are played by Kate Winslet and Saoirse Ronan, Ammonite will likely get much more attention than Josh O’Connor and Alex Secareanu brought to their film. (It also has the sizzle of being a fictional love story involving real historical figures, which makes it Oscar bait– especially in this year of limited opportunities.)

Winslet plays 19th century paleontologist Mary Anning, who lived in Dorset and divided her time between running her mother’s curio shop and excavating fossils at the coast. Though she was respected in the scientific community, as a woman of no means Anning frequently saw her discoveries “presented” by wealthy men, receiving little money and even less credit.

Lee and Winslet imagine Anning as embittered and brusque, with no interest in social activity or even casual conversation; her mother (Gemma Jones) is little more than a husk, ruined by a life of loss and deprivation, and it’s implied that Anna is on the same track herself.

And then one day Charlotte Murchison (Ronan) accompanies her husband to the Annings’ shop, and everything changes. Charlotte falls sick, and the Annings take her in to recover when her husband must return to London. And Mary and Charlotte wind up spending a great deal of time together.

As he did in God’s Own Country, Lee shapes his film’s love story through disdain and exasperation, Mary treating the calm, unwavering Charlotte harshly and with cruelty, simply because she sees something in the younger woman that she cannot abide in herself. (Is it queerness, or just happiness?) But the two forge an understanding, and that understanding grows into something deeper.

I’m obliged to point out that Ammonite has encountered some controversy in the United Kingdom: Anning’s family is upset that Lee has interpreted her as gay, and the circumstances of her friendship with Charlotte Murchison were not at all as they’re presented here: Charlotte was actually older than Mary, and a geologist in her own right, and while the two women were friends and correspondents, there’s no evidence that they were lovers.

But there wouldn’t be, would there? That’d be another way in which Mary was erased from the identity she most wanted. And that’s the metaphor Lee clearly wants to explore in Ammonite: Just as Mary spends her days looking for rocks that hold secrets, she herself carries hidden truths, and Charlotte is one of the few who sees them. Of course she wants to look deeper, to know this woman as fully as she can. This is, after all, a love story.