TV review: Amy Schumer grows up and grosses out in Netflix special

In Growing, the pregnant stand-up comic's funniest material is about proposals, relationships and periods 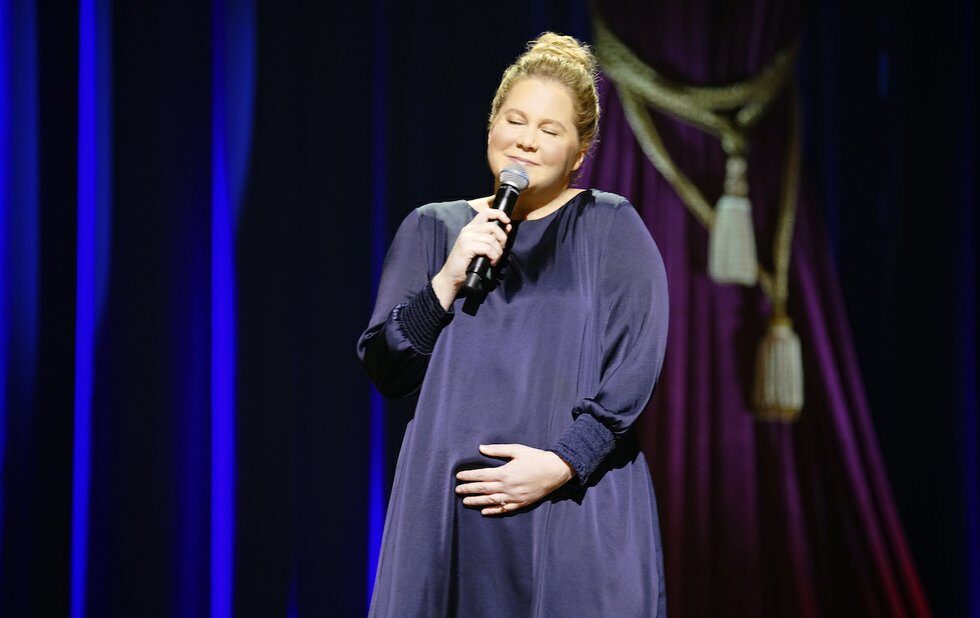 At 37, comedian Amy Schumer is growing – in every sense. Performing in front of a Chicago audience for her latest Netflix special, Schumer’s pregnant belly is growing, and perhaps more importantly, she has grown up – and so has her comedy.

The one-hour show takes a while to warm up, because change takes time and Schumer clearly feels most comfortable relying on her old antics. She’s loud, crass and shocking: within five minutes, she hikes up her black dress to expose her full belly – and underwear – after bemoaning the media for not noticing her baby bump until she was well into her second trimester.

She complains about not being able to drink wine or do drugs for nine months, and whenever asked if she’s been experiencing pregnancy cravings, she yells, “COCK” into the mic.

The flashy first act feels stale, and perhaps Schumer knows it as she nods to the applause, as if signalling the audience to cheer louder. The whole “I’m a fat girl” bit, which continues to underline most of the body-focused comedy she’s still milking despite criticism from women of size, feels especially gimmicky when her belly is caused by pregnancy.

Luckily, Schumer doesn’t stay in this self-deprecating space for too long. Genuine applause and cheers start to flow when she recalls her non-eventful marriage proposal from husband Chris Fischer. (He popped the question in the morning and she fell back asleep.) That leads to one of the funniest bits in the set on expectations versus reality when it comes to proposals, relationships and weddings.

“There’s no dignity in being a bridesmaid in your late 30s,” says Schumer, adding that New York women who marry at 40 are still considered young. “You just hope you don’t have the biggest arm in the wedding party.”

She skewers the absurdity of still being able to force friends to partake in your wedding when modern women have many other priorities than getting married. The bit comes off as smart, relatable and feminist.

Her sincerity also comes through when she details her husband’s Asperger’s and his inability to tell a lie, which ultimately effects Schumer whenever she tries to lie to their friends. “Oh my god, I had no idea,” she reacts to news of a divorced friend moving on. “Yes, you remember that. You were at the party,” Fischer leaks. These exchanges are endearing and punch up on a disability joke that could’ve gone the other way.

The set undoubtedly peaks during the discussion of periods. I’ll remember Schumer describing retrieving a menstrual cup as a “Kill Bill situation” the next time I’m suffering from PMS and feeling sad.

But the final quarter of her set seems like a bit of a throwaway, zigzagging from Brett Kavanaugh, to buying lingerie, to losing the urge to have sex with her husband. None of it seems that memorable, and rather than building to a final joke, Schumer fumbles the ending. Luckily, there’s enough solid comedy beforehand to push it over the finish line.

On International Women’s Day, Schumer posted a picture of herself as Rosie the Riveter on social media – her blue-collared shirt rolled up to reveal her pregnant belly, her flexed arm clutching a microphone. While she’s hardly a symbol of American feminism, and while her set isn’t revolutionary, she’s clearly going through major life changes and Growing reflects that.