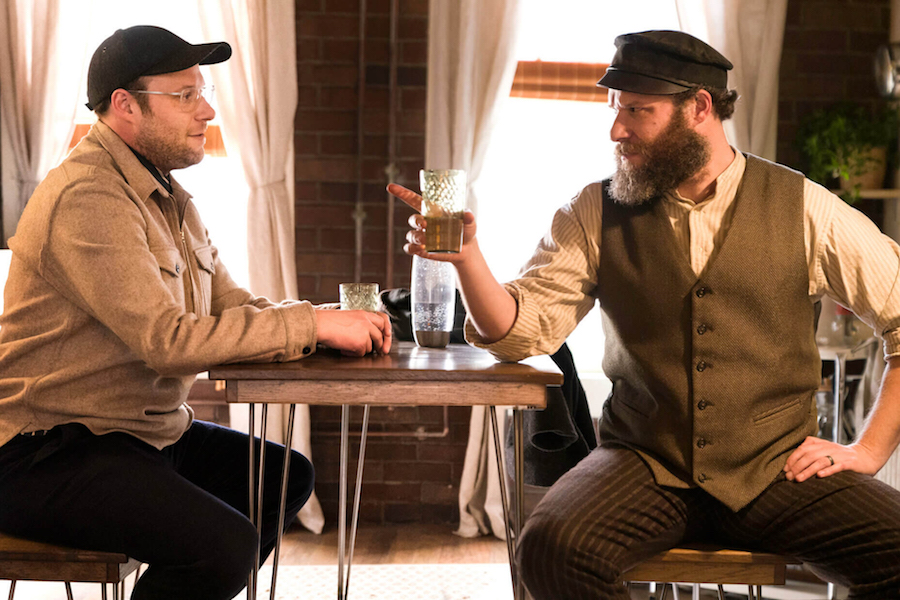 An American Pickle may not be a great movie, but it sticks with you. It’s been a week since I saw producer/star Seth Rogen’s goofy little spin on Iceman – the first feature film to premiere on the new American streaming service HBO Max, and available on Crave up here – and it’s still bouncing around in my head. I think that’s a good thing. You might also.

In 1919, Brooklyn pickle-factory worker Herschel Greenbaum (Rogen) falls into a brining barrel, where he lies perfectly preserved for a century – resurfacing 100 years later to a very different world, with his great-grandson Ben (also Rogen) his only surviving family.

Building a generational fish-out-of-water tale from his 2013 short story Sell Out, screenwriter Simon Rich mixes some fun commentary on hipster America’s obsession with artisanal frippery and social-media meltdowns into a deeper, sadder story about loss and faith.

Herschel has awakened in a world without his beloved wife Sarah (Sarah Snook), and the movie allows his grief to be genuine and lasting. Ben is also living with loss, though in his case he’s tried to ignore its impact by throwing himself into his work as an app developer. So Herschel, too, throws himself into work, reinventing himself as a pickle peddler. He’s an instant hit in Williamsburg, where his Old World grunge reads as authenticity. And I suppose it is, just not the way everyone thinks.

Fans of Rich’s Man Seeking Woman will recognize the very specific way the emotionally complex material is constantly interrupted by absurd flights of fancy, and how the plotting sometimes scrambles to incorporate each new notion that zips past. And somewhere around the 45-minute mark, I did find myself wondering whether An American Pickle might have worked better as a TV series, where the episodic format could have let Rich and Rogen expand on the goofy notions the movie is forced to shuffle through at speed.

But even when the movie gets cluttered with one petty conflict too many, or a leap of logic Rich and Rogen push through a little too quickly, the core of An American Pickle is sound: both of its principals are unmoored, one clinging to his faith and the other clinging to his atheism. And Rogen, who’s never hesitated to put his secular Jewish identity front and centre in a character – think back to the opening scene of last year’s Long Shot, where his undercover journalist outs himself to a pack of neo-Nazis in a genuinely uncomfortable moment – doesn’t give us the sense that either Herschel or Ben is a caricature.

He finds the honest emotion in both of them, and lets director Brandon Trost – who’s been the cinematographer on a number of Rogen’s projects, among them The Disaster Artist and This Is The End – figure out how to frame the comedy. Points to costume designer Brenda Abbandandolo, too, for dressing Herschel as Tevye the milkman and putting Ben in brighter synthetics to subtly illustrate their chronological disconnect.

But it wouldn’t work if we didn’t believe the performance(s). And while I would not have thought Rogen and magic realism would go well together, the guy takes to the whimsical premise surprisingly well, giving two distinct and fully felt performances as both Greenbaums… even when An American Pickle moves a little too quickly to really let us savour them.