NOW MagazineMovies & TVReviewsReview: And The Birds Rained Down is a rich, moving film about aging and relationships

Review: And The Birds Rained Down is a rich, moving film about aging and relationships

Set in a small Quebec town, Louise Archambault’s film concerns the ends of things, and possibly the beginning of something else 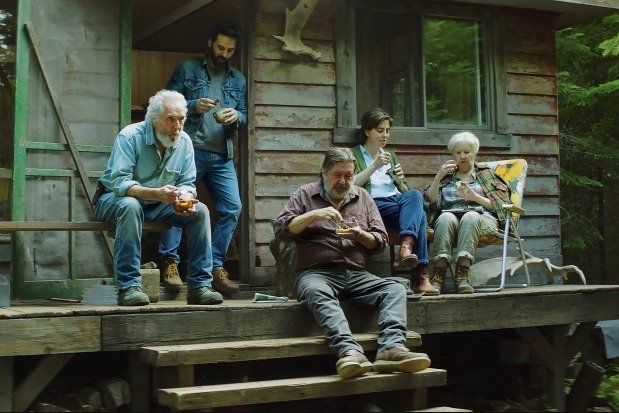 On the outskirts of a small Quebec town, on the shore of a beautiful lake, live three old men (Gilbert Sicotte, Rémy Girard, Kenneth Welsh) in cabins, set apart from society.

They’re hermits in the technical sense, but they’re not total recluses. They live normal lives. They swim in the lake. They play with their dogs. Tom (Girard) plays his guitar. And they’re practical, to an extent: they grow a little weed to pay for supplies delivered by young Steve (Éric Robidoux), who works at the motel in town.

We spend a little time with them, and begin to understand that these men – or at least Tom and Charlie (Sicotte) – have pretty good reasons for withdrawing from the larger world. But it can’t last: the wildfires to the north are getting closer, threatening their camp, and people keep wandering into their utopia.

A photographer (Ève Landry) arrives to document the survivors of another disastrous blaze decades earlier. And then Steve shows up with his aunt (Andrée Lachapelle), who’s spent decades in a psychiatric hospital and could do with some relative peace and quiet.

And The Birds Rained Down is about the ends of things, and possibly the beginning of something else. Adapting a novel by Jocelyne Saucier, writer/director Louise Archambault sets aside the mushy uplift of her 2013 breakout Gabrielle for a more sombre look at aging and relationships, and how people choose to face their last days.

It’s muted and moving, patiently assembling its characters and gliding alongside them, offering us a sense of individual stories coming together. The narrative balances its familiarity with texture and feeling there aren’t too many surprises, but Archambault offers a specificity – a sense of people and place – that grows richer and more moving as her film unfolds.

Not every role is given the same consideration. Welsh’s part is little more than a cameo, and Landry’s Raf and Robidoux’s Steve are left on the periphery as Archambault’s focus narrows to her core trio.

And those actors are perfectly cast. Sicotte and Girard are enthralling as the aging heroes, who treasure their shared solitude but are willing to welcome people in need, and Lachapelle – who died last fall – delivers an exquisitely felt valedictory performance as a woman experiencing life for the first time.