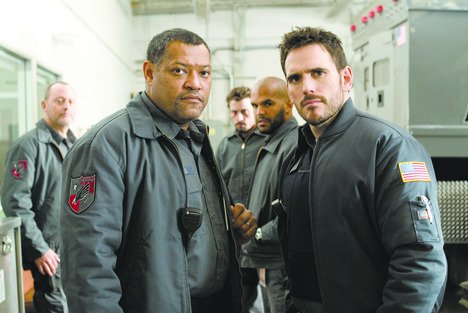 Armored is a so-so time-waster if you like caper flicks and don’t care too much about inventiveness, character or plausibility.

An armoured car crew decide to fake a robbery and walk away with the millions in their car. The heist goes wrong, and by mid-movie one guy is holed up inside the car while the others try to break in. Gang solidarity dissolves, and the action gets lively but not spectacular.

It takes too long to get to the meat because the first half is spent on our hero (Columbus Short). He’s newly orphaned, guardian to his teen brother and facing foreclosure on his mortgage. No one else has any motivation or much character, except Laurence Fishburne, the designated hothead. Matt Dillon, the head baddie, and Jean Reno, a gang member, are wasted.

The implausibilities begin with security guards displaying the macho brotherhood common to movie cops, and peaks with our hero crowbarring his way out of the car while the others haven’t even been able to get the hinges off. The creativity drought is signalled by a plot that needs not one, but two extraneous interlopers to stay in motion.

The basic idea here is extremely suspenseful. If you want to see it done right, hunt out Yves Simoneau’s 1986 Pouvoir Intime. It’s around on VHS.