At Home By Myself…With You 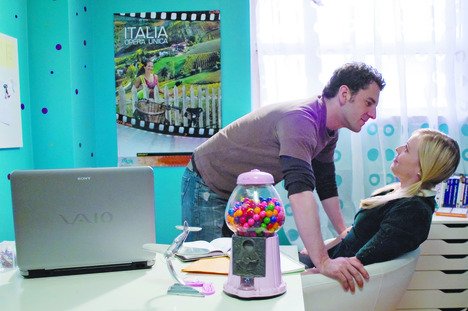 AT HOME BY MYSELF… WITH YOU (Kris Booth). 83 minutes. Opens Friday (March 5) at the Royal. See Indie & Rep Film. Rating: NNN

At Home By Myself… With You tells the story of Romy (Kristin Booth), a multi-phobic Toronto shut-in. Afraid of lobsters, boxes, kissing and storms, she hasn’t left her apartment in six years.[rssbreak]

She’s constructed a happy enough life for herself – which, naturally, is sent spinning into chaos by the arrival of a prickly new neighbour (Aaron Abrams).

Booth and Abrams (who co-starred in Young People Fucking, though they had no scenes together) spend the whole movie navigating around one another, with occasional intrusions by the building’s obnoxious super. He’s played by Raoul Bhaneja, in a performance that belongs in a different movie.

Though he strikes a gentle tone, director and co-writer Kris Booth (no relation to his star, as far as I’ve been able to determine) doesn’t shy away from the darker side of Romy’s situation. And Kristin Booth does a great job of conveying the abject terror hidden just behind Romy’s bright smile.