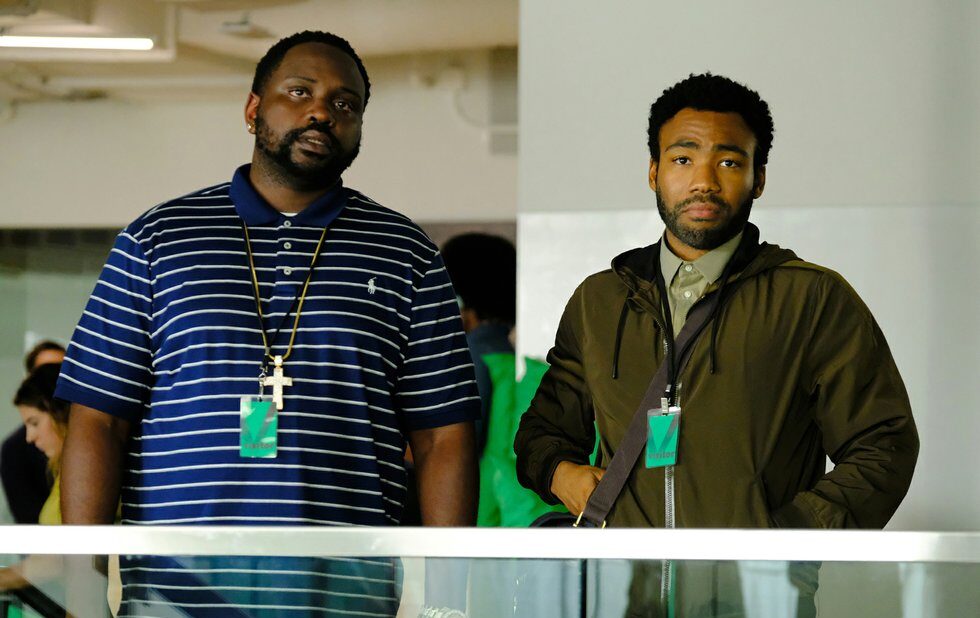 Season two wastes no time in kicking Earn out of the storage unit, and Paper Boi’s paper still largely comes from dealing drugs, because, as he lamented last season, “there is no money anywhere near rap.”

This is Atlanta’s American Dream: two young Black men trying to succeed in the rap game, who face so many social and economic setbacks, you suspect they’ll never arrive.

Season two is dubbed Robbin’ Season, regional parlance for the rise in robberies experienced just before Christmas. In the series’ first three episodes, theft is so inevitably a part of the struggle in these characters’ lives that when one of the leads gets his cash stolen in episode two, the thief literally apologizes: “I’m sorry about this shit. Imma pay you back. I appreciate you, man.”

On Atlanta, there’s seemingly little you can do to improve your circumstances before someone comes along to rob you of your gains. It’s a bleak view, but then again, creator/producer/star Glover was set on creating an uncomfortable experience. He told reporters at the Television Critics Association’s summer press tour that he wants people to feel scared when they watch season two because “that’s kind of how it feels to be Black.”

For Glover, that feeling is rooted in the fear experienced by a community living a precarious existence. It’s not the whole story of being Black. But it does fly in the face of how TV used to want audiences to experience Blackness.

Black TV in the 80s and 90s gave us cultural phenomena like The Cosby Show, The Fresh Prince Of Bel-Air and Family Matters. These shows centred on an upwardly mobile vision of Black family life. Some were better than others at wearing their cultural awareness (remember all the essential Black artists, such as B.B. King and Miriam Makeba, who used to pop by the Huxtables’ Brooklyn Heights brownstone for a visit?). Unfortunately, these shows were also firmly situated in the politics of respectability.

The Huxtables, for example, were originally conceived as a blue-collar family wife Clair was supposed be an electrician. Her occupation switched to lawyer and the whole family written as upper middle class, their values never straying from the mainstream American belief that a combination of industriousness and personal ethics is the foolproof path to getting ahead.

The Fresh Prince Of Bel-Air’s politics can be summed up in one of its most beloved recurring scenes. (Stop reading here if you don’t want your nostalgia messed up). Uncle Phil throwing Jazz out of the family mansion is all about respectability politics: Black people who’ve escaped hardship through hard work (Uncle Phil lived in an L.A. project before hitting it big as a Bel-Air judge) must vigilantly reject all associations with the disreputable parts of their previous lives (Jazz was aimless, tactless and lived in Compton he was Will’s last link to an inner-city existence).

Respectability politics is essentially about policing Black behaviour by holding it up against standards deemed acceptable by white society. It’s not surprising then that there weren’t many plots that looked at the actual dynamics between white and Black characters on these shows. Helmed largely by white showrunners, they were content to depict Blackness through a comfortably white lens.

It made for such non-threatening TV: pleasant viewing for the networks’ lucrative evening lineups.

True to Glover’s word, Atlanta Robbin’ Season isn’t pleasant. It’s Jazz getting kicked out of the mansion and showing that he gives two fucks by never returning. The show detests respectability politics, which is evident right down to its casting. Episode one featured comedian Katt Williams, whose multiple arrests in 2016 led to his banishment from two Georgia counties, in the role of Earn’s alligator-owning, police-defying Uncle Willy.

In the upcoming third episode, Earn races retired NFL player Michael Vick – arrested in 2007 and publicly condemned for running an illegal dogfighting ring – outside a strip club for cash. Rather than reveal if Earn wins or not, the camera simply cuts to his on-again-off-again lover Van (Zazie Beetz) remarking incredulously: “It’s Michael Vick.” As if to say that any association with him is already a loss.

But by featuring both Vick and Williams, the show is embracing these associations and it doesn’t seem all that interested in what respectable society might think of it.

In a recent New Yorker profile, a link is found to Glover’s views on rap: “Rap is ‘I don’t care what you think in society, wagging your finger at me for calling women bitches – when, for you to have two cars, I have to live in the projects.’”

In the same article, he recounts a fight between himself and Henry over the limits of Black representation in the media: “To Brian, the basic fact that white people don’t want their feelings hurt so we have to make everything palatable to them is really upsetting. I used to feel the anger he feels about it, anger to the point of tears. Now it’s just boring to me.”

That sense of ennui goes on to permeate the start of the season – the characters don’t seem overly bothered by the violence, discrimination and theft that befall them – but that doesn’t mean that there isn’t tension.

As Earn and Paper Boi attempt to make strides in the music industry, white people, who are either repulsed by their lack of respectability or embrace it as an opportunity to exploit, throw up obstacles.

Will they ever make it? Probably not. When you throw respectability politics to the wind, you quickly realize that you’re damned if you do play ball, damned if you don’t.