Review: Barb & Star Go To Vista Del Mar has to be seen to be believed 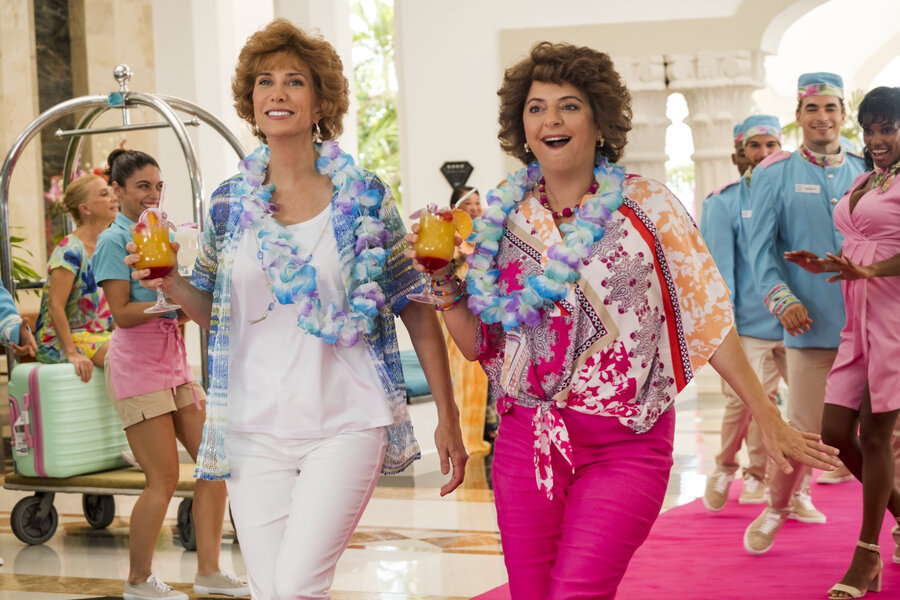 Kirsten Wiig and Annie Mumolo are Star and Barb in Barb & Star Go To Vista Del Mar. Yes, it's counterintuitive.

I’ve been saying this a lot lately, but I wish I could have seen Barb & Star Go To Vista Del Mar with an audience. I’d love to see how this movie plays with a crowd.

Written and produced by stars Kristen Wiig and Annie Mumolo, who shared an Oscar nomination for Bridesmaids and have clearly been workshopping these characters as long as Ed Solomon and Chris Matheson were playing with Bill and Ted, Barb & Star Go To Vista Del Mar offers exactly what it says on the tin: Wiig and Mumolo are two Midwestern BFFs who impulsively take a trip to a coastal resort town in Florida with the expectation of buying some seashell jewelry and maybe riding one of those banana boats they keep hearing about. Possibly they’ll meet a fella, you never know.

Except that, thanks to some handy exposition offered in a very unexpected prologue, we also know Barb and Star are wading straight into an elaborate and fairly ridiculous mass-murder plot, which involves a supervillain’s chiseled henchman Edgar (Jamie Dornan) planting an ultrasonic weapon at the site of the historic Vista Del Mar Seafood Jam.

You can totally see why Will Ferrell and Adam McKay would put their weight behind Barb & Star Go To Vista Del Mar as executive producers: the film it most resembles is that duo’s absurdist buddy-cop comedy The Other Guys, where the story’s genre is just an excuse for a string of character-based jokes about how preposterous said genre is. Other critics might say this is Wiig’s version of an Austin Powers movie, which is not necessarily wrong, but neither is it exactly right. For one thing, Barb & Star Go To Vista Del Mar is actually funny.

It starts off goofy and just gets goofier, piling one ridiculous notion on top of the next in an elaborate game of “yes, and” that just refuses to stop for breath. There are unexpected musical numbers and talking animals and a callback involving lemon-infused iced tea that shouldn’t have been funny at all, but made me snort out loud.

I expect Wiig and Mumolo to live inside their characters, and they absolutely do – Barb and Star’s lifelong bond is demonstrated through mutual eccentricities and verbal tics, and there’s one wonderful scene where the two of them invent an imaginary friend named Trish over the course of a plane trip that’s so thoroughly realized it feels like they’ve conjured her into existence.

But Dornan is the real surprise; after a string of fairly stoic performances, most recently in the blarney-laden Wild Mountain Thyme, it turns out he’s been concealing a needy comic energy and a fine sense of his own ridiculousness that left me wondering whether I’d been underestimating him all along. (Does this mean I need to revisit the Fifty Shades movies? Was Christian Grey secretly taking the piss?)

Look, I could tell you what happens in Barb & Star Go To Vista Del Mar, but you wouldn’t believe me. You have to experience it for yourself, and while I’m sure it would be a lot more fun to watch this movie with 500 other people who are similarly unprepared for the live-action cartoon of it all, it’s pretty damn funny on its own. Trust me on this, or I’m taking your soup.