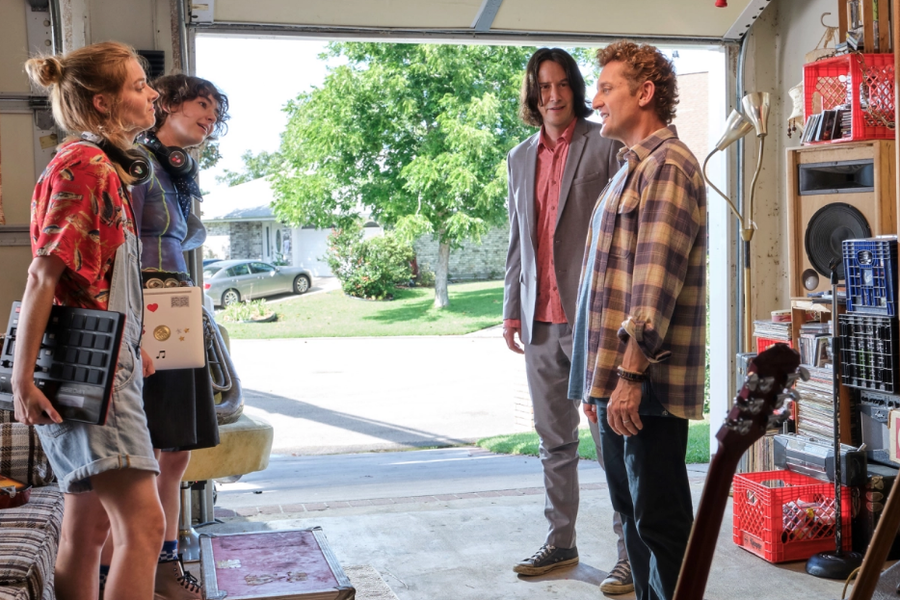 Bill & Ted Face The Music is the movie we need right now. Or at least it’s the movie I needed.

Nearly 30 years after Bill S. Preston, Esquire and Ted “Theodore” Logan cheated Death (at Battleship) in Bill And Ted’s Bogus Journey and got themselves back on track to unite the universe with one perfect song, Keanu Reeves and Alex Winter have reunited with screenwriters Ed Solomon and Chris Matheson to catch up to the characters and see what’s what in San Dimas.

Bill (Winter) and Ted (Reeves) are still married to the princesses (now played by Erinn Hayes and Jayma Mays), and raising their millennial daughters Billie (Atypical’s Brigette Lundy-Paine) and Thea (Ready Or Not’s Samara Weaving) to follow in their footsteps as musical omnivores. But they’re also still obsessed with writing the Wyld Stallynz song prophesized to unite the universe – to the point that they’ve neglected everything else in their orbit. Their codependency is as strong as ever; that’s the problem.

But just as their personal issues reach a breaking point, an emissary from the future arrives to rock Bill and Ted’s world: it’s time to shred or get off the pot. The song must be performed in a matter of hours, or all reality will cease to exist. There’s just one problem: they still haven’t written it.

Fortunately, when you have a time machine a strict deadline isn’t your biggest problem. And so Bill and Ted decide to go forward to a point in time when their older selves will have already written the song – and get it from them.

This is a classic time-travel paradox riff, open to all sorts of self-reflexive silliness with Bill and Ted running into increasingly ridiculous versions of themselves. And for a bit, it does feel like Face The Music is prepared to settle for rehashing the boneheaded time-hoppery of Bill & Ted’s Excellent Adventure. But Solomon and Matheson (with the help of Galaxy Quest director Dean Parisot) have something else in mind – something about aging out of who you used to be and appreciating the person you’ve become.

The core joke of Bill and Ted has long been that whatever they experience doesn’t really change them – they’re just happy-go-lucky kids who want everyone around them to be as fulfilled as they are. But that also means they never really grow, despite some seriously profound experiences. Bill & Ted Face The Music is about leading its heroes to understand that, and honestly? It’s kind of wonderful.

And you can’t make a movie about middle-aged Bill and Ted without acknowledging who Bill and Ted really are. Alex Winter has more or less abandoned acting to be a documentary filmmaker, and of course Keanu Reeves has spent most of the last quarter-century playing stone-faced warriors like Neo and John Wick – to the point that it’s kind of weird to see him play someone who’s genuinely relaxed. (Ted’s voice is at least a register lower than it was in 1991, which takes a bit of getting used to.)

But it’s also clear that both actors really like doing this, and we get to share the pleasure they take in nudging Bill and Ted towards their climactic revelation – and in sharing scenes with Lundy-Paine and Weaving as Billie and Thea, whose performances echo their screen dads’ younger selves in a couple of marvelous ways.

There are other pleasures, too: William Sadler’s mordant Death returns from Bogus Journey, and he remains a wonderful comic creation; Kristen Schaal turns up, as do Holland Taylor and Jillian Bell, and Anthony Carrigan, the bright-eyed stealer of scenes in Bill Hader’s Barry, gets a character perfectly tailored to his specific mixture of malevolence and enthusiasm.

I dunno, maybe you’ll prefer Tenet. Me, I was ready for an hour and a half of good-natured goofiness with an underlying message of hope for humanity, and a story that’s ultimately about finding perspective, opening yourself up to new possibilities, and still getting to shred with your best bud.

There’s no better lesson for 2020, except maybe the thing about being excellent to each other. But that train left the station a few months back.