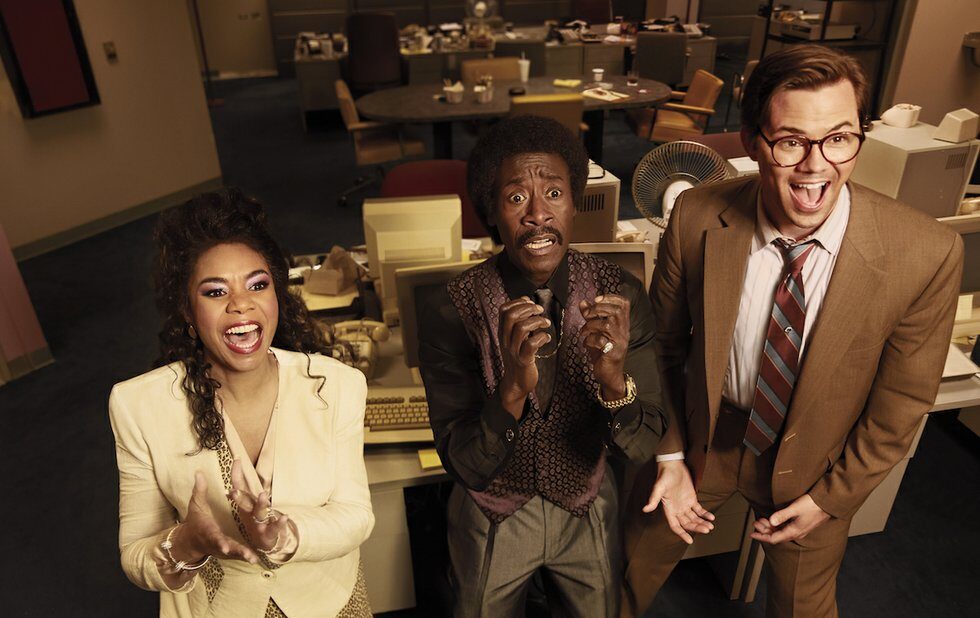 Showtime’s new comedy series Black Monday is like the goofier and sweeter sibling to Martin Scorsese’s The Wolf Of Wall Street. Both are about coke-fuelled New York-stockbroker excesses and the soullessness it takes to play with other people’s money.

But whereas Scorsese’s film reveled in cynicism, saddling up with Leonardo DiCaprio’s completely repellent and unrepentant Jordan Belfort, Black Monday wants you to dig its crooks – if just a little.

Sentimental touches and hints that conniving hustler Maurice “Mo” Monroe (Don Cheadle) is redeemable make the series (at least in the first three episodes sent to critics) both easier to watch but also harder to swallow.

I don’t think anyone is expecting an authentic take on late-80s Wall Street (never mind a morality tale we would take seriously) from executive producers Seth Rogen and Evan Goldberg (Pineapple Express). The comic duo directs the first episode and sets an exuberant, “rickrolling” tone for things to come.

However, the series – created by David Caspe and Jordan Cahan – stands apart from previous Wall Street tales by focusing on characters with outsider status.

“I’m going to put the brother in Lehman Brothers,” says Cheadle’s Maurice, whose diverse trading firm and inner circle is filled out by a Black woman, an Arab man and a gay man. They’re not the typical blue bloods – Maurice talks about growing up celebrating birthdays with an apple pie from Church’s Chicken – but they flaunt and connive like the worst of them. Cheadle hasn’t been this charismatically cutthroat since he played another Maurice, the villain in Steven Soderbergh’s 1998 crime-comedy Out Of Sight.

Black Monday begins with Maurice playing a long game: He manipulates an idealistic Wall Street rookie Blair Pfaff (Andrew Rannells from Girls) into an amiable sage-pupil relationship, but only because he has ulterior motives. His plan is not at all plausible, at least not for anyone who takes making money seriously. But then again, maybe that’s not exactly what Maurice is after. His big, showy risk-taking and eagerness to win seem less about greed and more about satisfying a bruised ego.

Maurice can be generous, too, in those moments when the show’s sentiment kicks in. But that happens only after he feels dominant over the people who need his kindness. You see that in his relationship with Blair and Regina Hall’s Dawn Darcy, the firm’s second-in-command and a former flame.

Hall is having a long-deserved moment thanks to this series and Support The Girls, two projects that tap into her comic and dramatic reserves in ways few directors have in the past.

That’s really all the reason you need to watch Black Monday.