NOW MagazineMovies & TVReviewsReview: Bombshell is an entertaining but unambitious melodrama

Review: Bombshell is an entertaining but unambitious melodrama 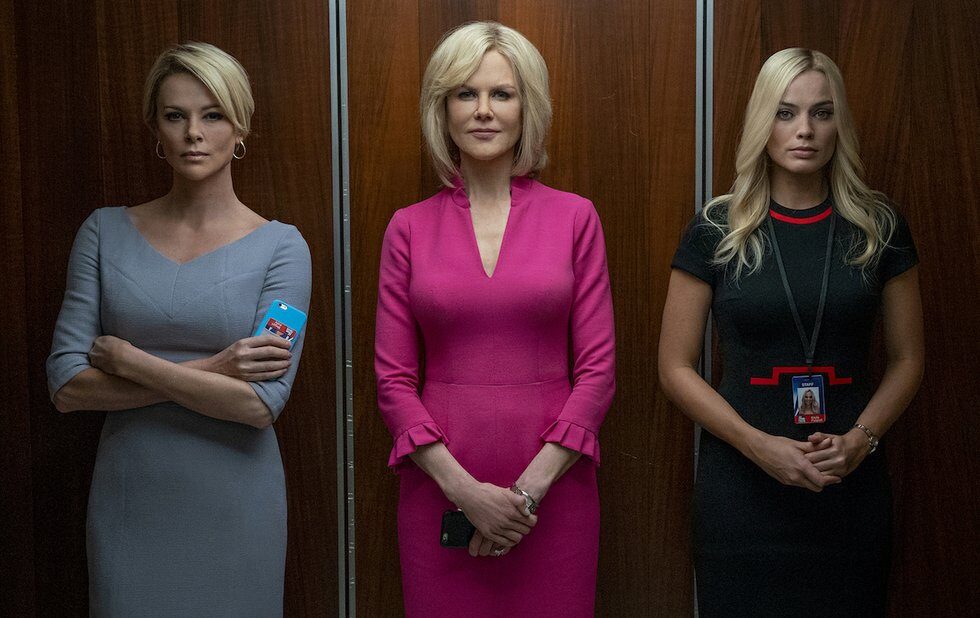 “I thrive in toxic work environments” is how one Fox News employee explains her ability to stomach working at the conservative American cable news channel in Bombshell.

The quip, one of many memorable one-liners in director Jay Roach’s dramatization of the 2016 sexual harassment scandal that ousted network chairman and CEO Roger Ailes, belongs to Jess Taylor, a closeted liberal and lesbian played by Kate McKinnon. But the line would be at home on the résumés of most characters in this briskly entertaining but unambitious melodrama.

Not unlike other year-end award season hopefuls, Bombshell is about people facing moral choices that mean the difference between status quo or pariah status.

In this case, star Fox News anchor Megyn Kelly (Charlize Theron) ponders whether or not to support her ex-colleague Gretchen Carlson (Nicole Kidman) in publicly accusing Ailes (John Lithgow) of sexual harassment. Her predicament: speak out, jeopardize her job and turn the media spotlight on herself or stay silent, allow a predator to operate and sell out a colleague she knows is telling the truth.

The movie opens in August 2015 with Kelly blithely explaining the office culture and dress code, which requires women appearing on air to wear Kardashian-levels of makeup and show off ample leg. She’s preparing to moderate a Republican presidential primary debate and goes against Ailes’ wishes by asking future president Donald Trump about his track record of misogynist comments. After the debate, Trump verbally attacks Kelly on social media, turning the incredulous anchor into “the story.” Initially, she refuses to clap back, but eventually lets Trump off the hook with a fluffy follow-up interview she hopes will put the bruising controversy to rest.

Meanwhile, Carlson, another on-air host, has been demoted to an afternoon slot where she gently pushes back against Fox’s right-wing machismo by appearing on-air without makeup and calling for stricter regulations for assault weapons. She’s fed up with enduring sexist comments – on and off the air – and files a personal lawsuit against Ailes to get around contractual obligations when she’s fired.

She also becomes irate when evangelical millennial producer Kayla (Margot Robbie) leaves her show to work with known harasser Bill O’Reilly. Kayla is intent on moving up and brushes aside office politics and rumours until she winds up in a vulnerable position in Ailes’s office.

The three women, who only appear together in one scene, form a triumvirate representing different dilemmas. Bombshell does a good job of setting up the atmosphere that isolates women from one another, allowing harassment to occur. A lot of the movie’s initial power comes from what’s not said despite screenwriter Charles Randolph’s emphasis on punchy and acerbic dialogue.

Gradually, the film resorts to more didactic exchanges and clunky reaction shots to explain Fox News’ tense culture of complicity. Theron’s ironic fourth wall-breaking narration starts the movie on a satirical note but the script mechanics grow obvious as the film slides into a mawkish empowerment narrative. As the story becomes more complex and serious, the tone, like the title, feels simultaneously too superficial and earnest.

Similarly, jokey actors that pop up as famous Fox anchors are overplayed, especially as the stakes get more intense. Still, the three leads and Lithgow, aided by extremely convincing makeup and hair, manage to transcend caricature, as do more prominent members of the support cast, like Connie Britton and Allison Janney.

Interestingly, Bombshell refrains from showing much of the vitriolic propaganda Fox News spews. Perhaps Roach and Randolph fear alienating Fox viewers inclined to dismiss the characters’ allegations, but the effect is sanitizing.

We get a few scenes of Carlson’s on-air segments, but very little of Kelly’s public persona. There’s a quick scene of her insisting Jesus was a white man during a pundit panel, but Bombshell doesn’t really explore why this conservative apologist sees herself as “not the establishment.” Though Theron does a good job of suggesting Kelly’s evolving inner turmoil, the movie is not that interested in the tension between her self-perception as a renegade and the emerging portrait of someone playing the corporate game to succeed.

Kidman is archly expressive as Carlson – it’s too bad she recedes to a secondary figure. Our only sense of her pariah status comes from short scenes of her wondering if anyone else will support her. We don’t really feel the intensity of her isolation since it’s frequently explained to us. When Rupert Murdoch (Malcolm McDowell) finally appears, it’s a missed opportunity to elucidate power structures. Instead, he neatly wraps up the plot.

By the end of Bombshell, these very specific and vivid characters settle into oddly generic story arcs.